Data Engineering a Solution with Python and SQL Server

Demonstrate how to integrate Python and SQL Server for a database solution. Also, focus on repurposing previously developed code as well as data engineering for sharing data across more than one application and database.

This tip leverages a couple of prior tips (here and here) on how to extract stock price and volume data from Yahoo Finance with Python and then save the data in SQL Server. A third prior tip drills down on how to compute exponential moving averages with different period lengths for time series data in SQL Server.

Customizing a Python script for a modified task

The following screen shots shows a modified version of some Python code to read time series from Yahoo Finance and save the results in a .csv file. The next section of this tip shows how to read the .csv file into SQL Server for further processing. Four parts of the Python script can be modified for applications like those demonstrated in this tip. 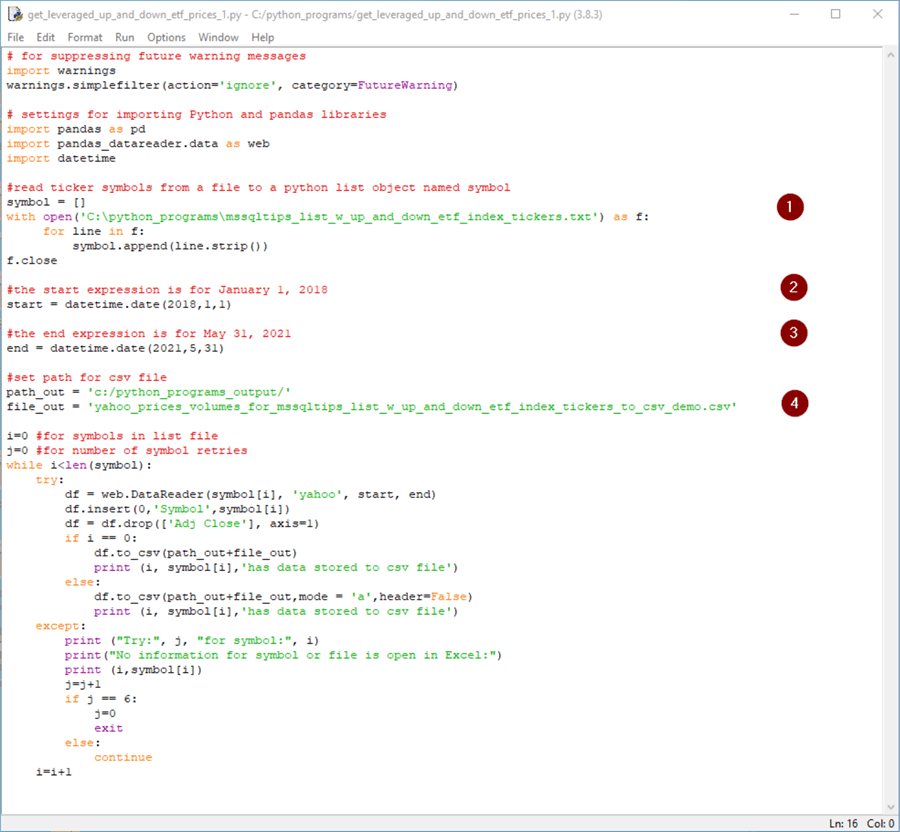 The table below displays three images from the .csv file specified to the left of the fourth red bullet in the preceding Python script.

Reading the .csv file from Python into SQL Server

The following T-SQL script illustrates one way of importing into SQL Server the .csv file created by Python script in the preceding section.

The following table shows the first and last five rows in the results set from a select statement at the end of the preceding script. Notice that the values in the results set match those from the spreadsheet display of the .csv file contents in the prior section.

Computing exponential moving averages for data from the DataScience database

The following code segment demonstrates how the tip transfers data from the DataScience database to the for_csv_from_python database.

The next code segment starts by truncating the date_symbol_close_period_length_ema table. This table is used by this tip’s application to store exponential moving averages with different period lengths. The insert_computed_emas stored procedure successively adds new rows in a relational database format to the date_symbol_close_period_length_ema table. Each invocation of the stored procedure passes a parameter for one of the distinct tickers in the yahoo_prices_valid_vols_only table. Within this tip, there are six invocations of the stored procedure – one for each distinct symbol. At the end of these invocations, the date_symbol_close_period_length_ema table has 36,036 rows – one row for each of the seven period lengths times the 5148 rows of time series data across the six symbols.

The following screen shot includes a short T-SQL script for displaying the rows in the date_symbol_close_period_length_ema table. The script sorts the rows by date, symbol, and period length for the computed ema values in the table. The Results pane size is set to show the first 21 rows of the results set for the script in the code window. 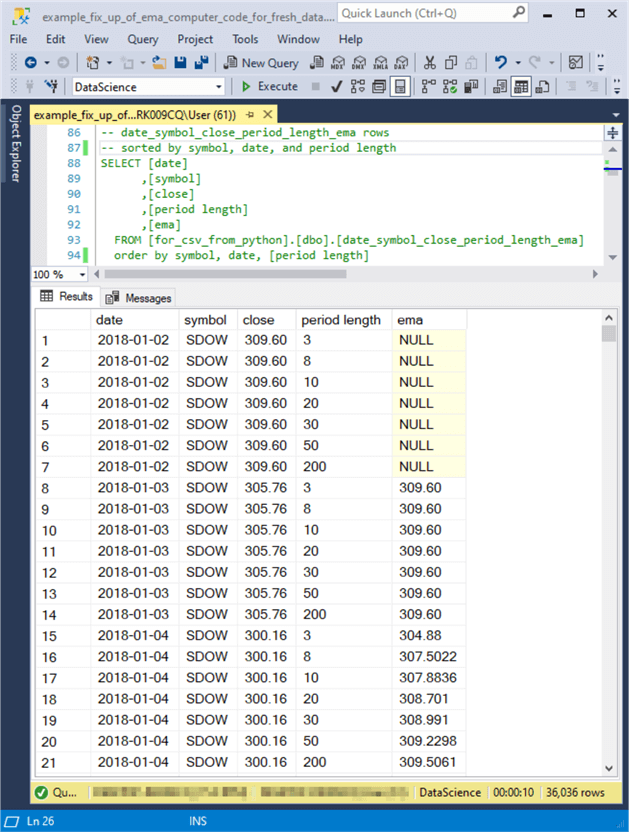 The following screen shot displays the last 21 rows in the date_symbol_close_period_length_ema table. 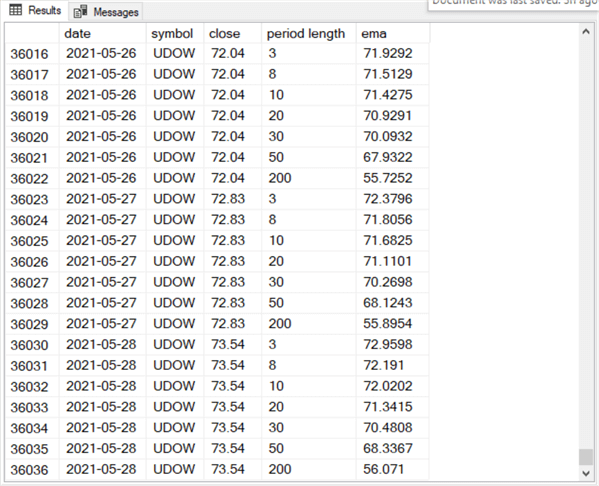 Displaying the computed ema values in a non-relational format

The date_symbol_close_period_length_ema table in the previous section stores seven different ema values for each of 5,148 time series values, whose values are unique from each other by symbol and date. The seven different ema values per time series value are derived from seven distinct period lengths so that the whole table contains 36,036 rows – that is, 5148 time series rows times 7 period length rows. While this kind of table design is convenient for joining the ema values to symbols and dates, it leads to a fact table that has many rows.

The following table displays the first and last seven rows of a table storing ema values with different period lengths in separate columns instead of separate rows.

Here’s a code segment for creating and populating a table like the one excerpted in the preceding table.

Instead of demonstrating how to modify the above script for each of six symbols and saving the results sets from the altered scripts in a table, the download for this tip contains two create statements – one for a fresh table, and the other for a fresh stored procedure.

After running the code to create fresh versions of the table in the DataScience database or whatever other database you use as your default database for running the code in this tip, you can run the following code segment to populate the table for each of the six symbols used in the tip.

The following table contains three excerpts from the results set for the select statement at the end of the preceding code segment.

This tip’s download file contains three files to help you get a hands-on feel for building a Python/SQL Server multi-step solution.

If you ever work with time series data, such as production for manufacturing plants, or weather for a collection of weather stations, or stock symbols, this tip (along with selected prior tips) can reduce your development effort to compute exponential moving averages. Furthermore, upcoming tips will demonstrate charting and modeling techniques for this kind of data.