Please provide several demonstrations for collecting stock data with Python. In addition to learning how to collect open-high-low-close-volume (ohlcv) data from a start date through an end date, I want to learn about collecting other stock data, such as stock dividends and splits as well as how to discover the sector and the industry for a stock. Include in the examples, code to display collected data as a printed report as well as save collected data in a csv file.

I have written and presented webinars about collecting stock market data several times over the years. Because of the evolving state of best practices for the activity, it seems that there is always something new and useful to share with fellow developers. There is a growing interest in Python among SQL Server analysts for collecting and storing stock data as well as other kinds of use cases. This tip exposes you to Python programming techniques that can facilitate the collection of any kind of time series data, such as weather observations and labor statistics.

The approach used in this tip is one that shows you short blocks of Python code along with a brief summary of each line or set of lines followed by a display of the output from the Python code. By tying the code to the output and building successively more powerful code blocks, you are empowered to acquire a core set of Python skills that goes beyond the basics – particularly for collecting data about stocks.

This tip has three key sections.

The source for all stock data in this tip is Yahoo Finance.

Working with the pandas data library

This section presents some sample historical stock price and volume data from the Yahoo Finance website along with four script files that show progressive improvements on how to retrieve the data with Python and the pandas library.

First try at getting historical data for a stock with pandas

Here are a couple of screen shots from the Yahoo Finance website that illustrate the results from a manual search to retrieve historical price and volume data for a ticker symbol. The company is Tesla, a well-known electric vehicle manufacturing company, and its stock symbol is tsla. 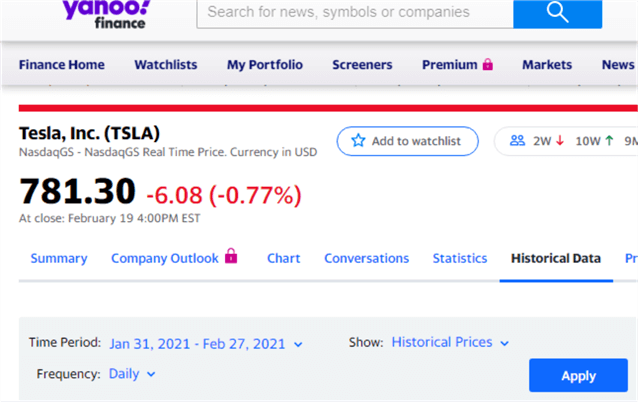 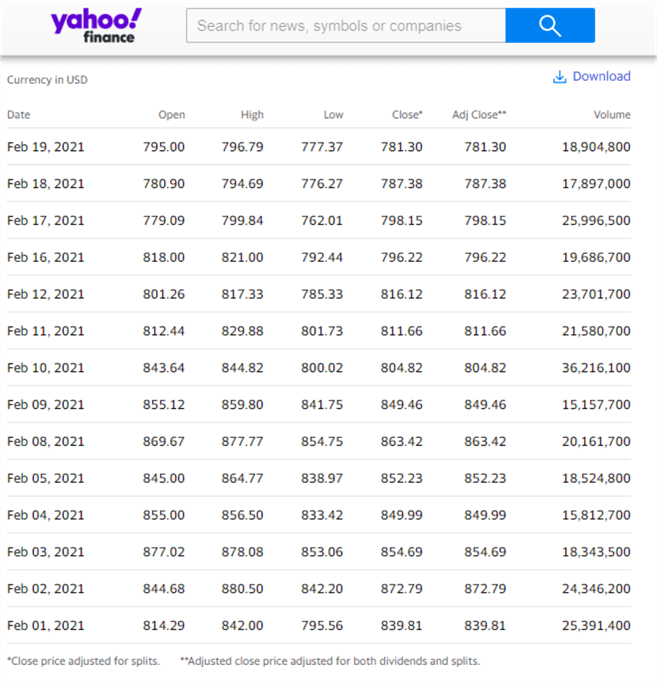 Here is a screen shot of a Python script for returning the same data range without going through the Yahoo Finance user interface. The code appears in an IDLE window. IDLE downloads automatically when you install Python from Python.org. IDLE is one of several developer environments for writing, saving, and running Python scripts. SQL Server professionals may find it useful to think of IDLE as a kind of an SSMS for Python code.

You can run the code in the preceding window by clicking Run, Run Module or by pressing the F5 key on your keyboard. The next screen shot shows the results from running the preceding script. This display is from another IDLE window that opens after the code completes running. 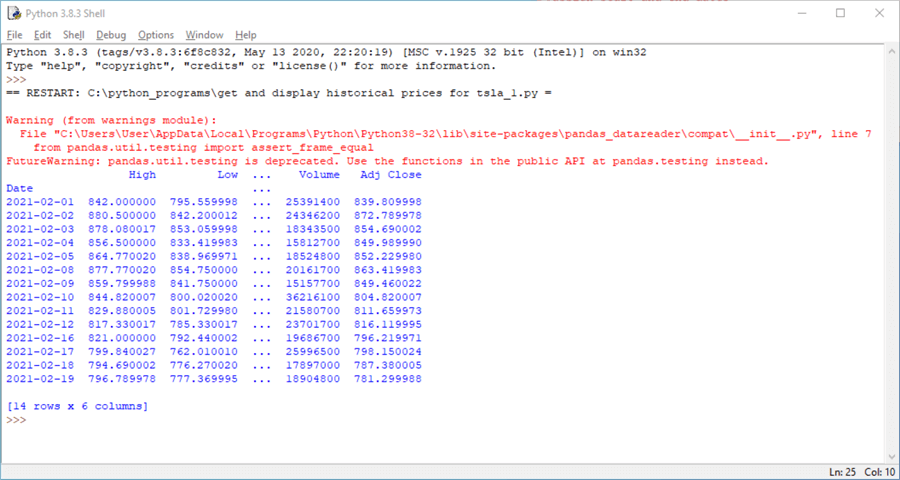 Second try at getting historical data for a stock with pandas

The screen shot below shows just the code window from IDLE for a modified version of the preceding script. The import warnings statement at the top of the script allows you to specify different types of actions for different categories of warnings. In this case, the instruction is to ignore FutureWarning messages so that they do not appear in the output for a script. 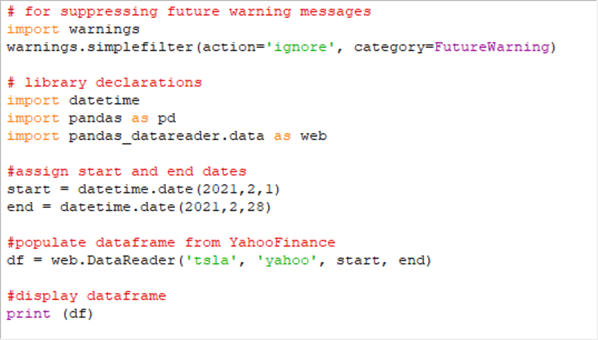 Third try at getting historical data for a stock with pandas

The following code window shows an additional line of code added to the script from the preceding sub-section. The new line is the next to last one that specifies the options.display.width setting. By assigning 0 to the setting, all the data columns appear in the results window. 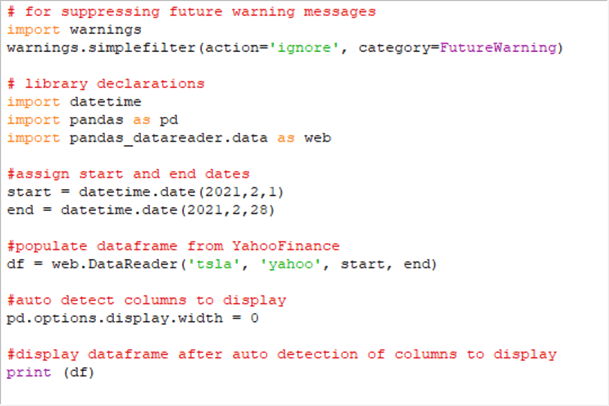 Here is the output window. Notice all six data columns plus the date index column appear in the output. Also, observe that there is no comment line reporting the number of data columns. This is because the assignment of 0 to the options.display.width setting causes all data columns to appear. 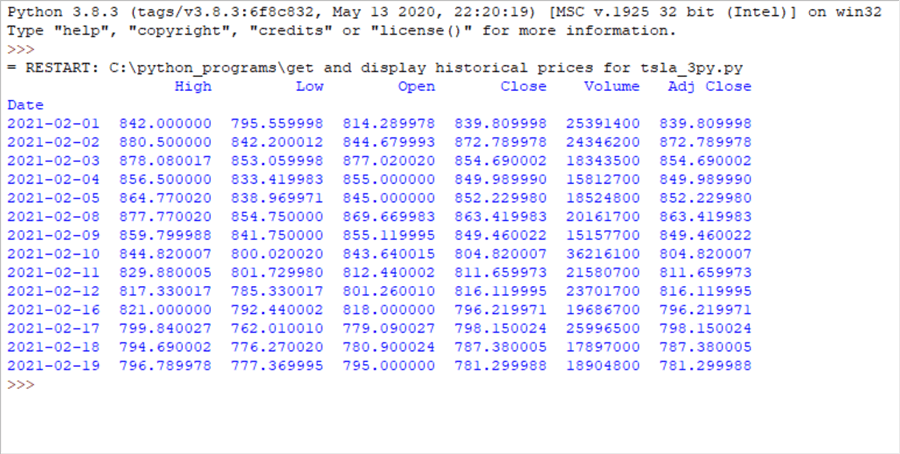 Fourth try at getting historical data for a stock with pandas 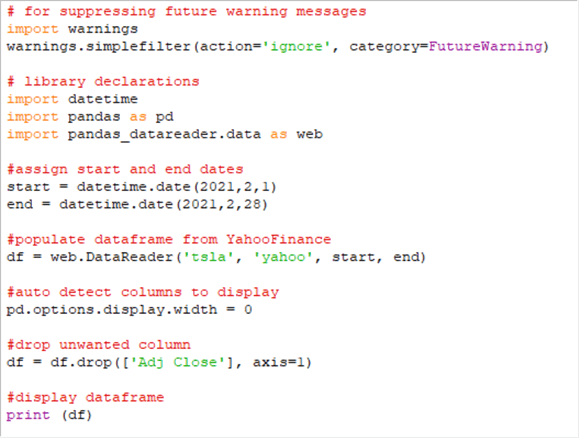 Here is the final output window from this code example. Notice that there are just 5 data columns because the Adj Close data column is dropped from the dataframe. 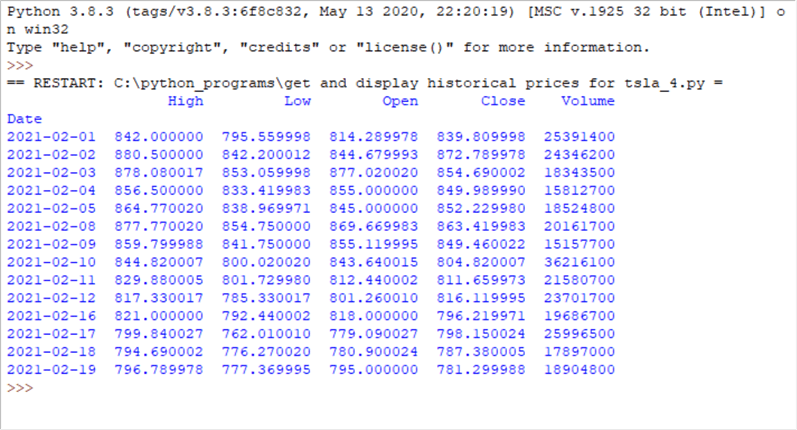 Working with the yfinance library

First try at getting stock data with yfinance

The next screen shot shows the results that will appear from running the preceding script file from the Python IDLE application; recall that you can do this as simply as pressing the F5 function key on your keyboard. There are two results sets in the Python output window. 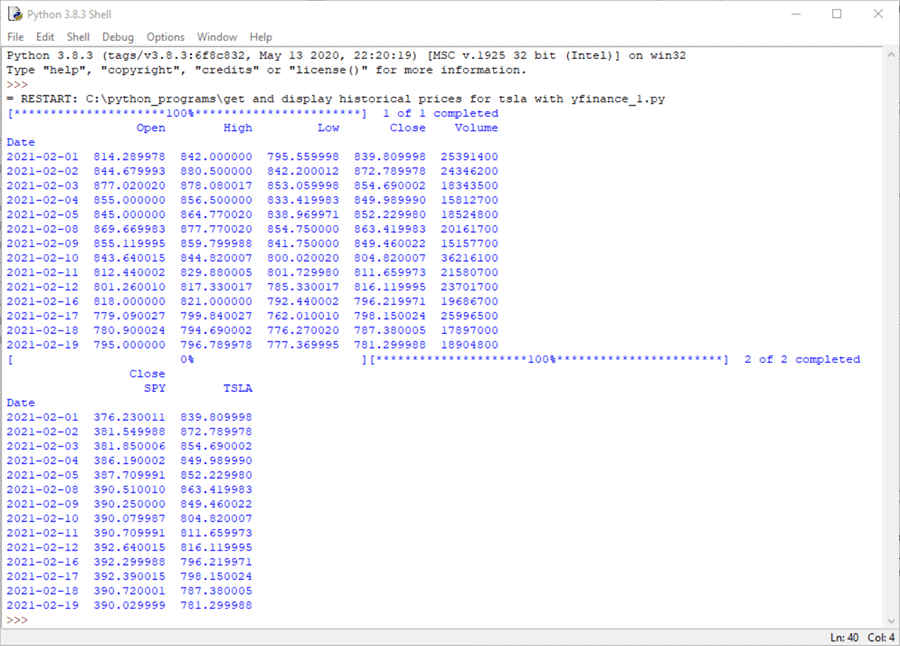 Second try at getting stock data with yfinance

The Python script below illustrates three approaches to collecting historical stock data with the history method for a ticker object defined via the Ticker method from the yfinance library.

The next table shows the Python code for the second uncommented history method and excerpted results from the print command.

The next table shows the Python code for the third uncommented history method and the results from the print command. 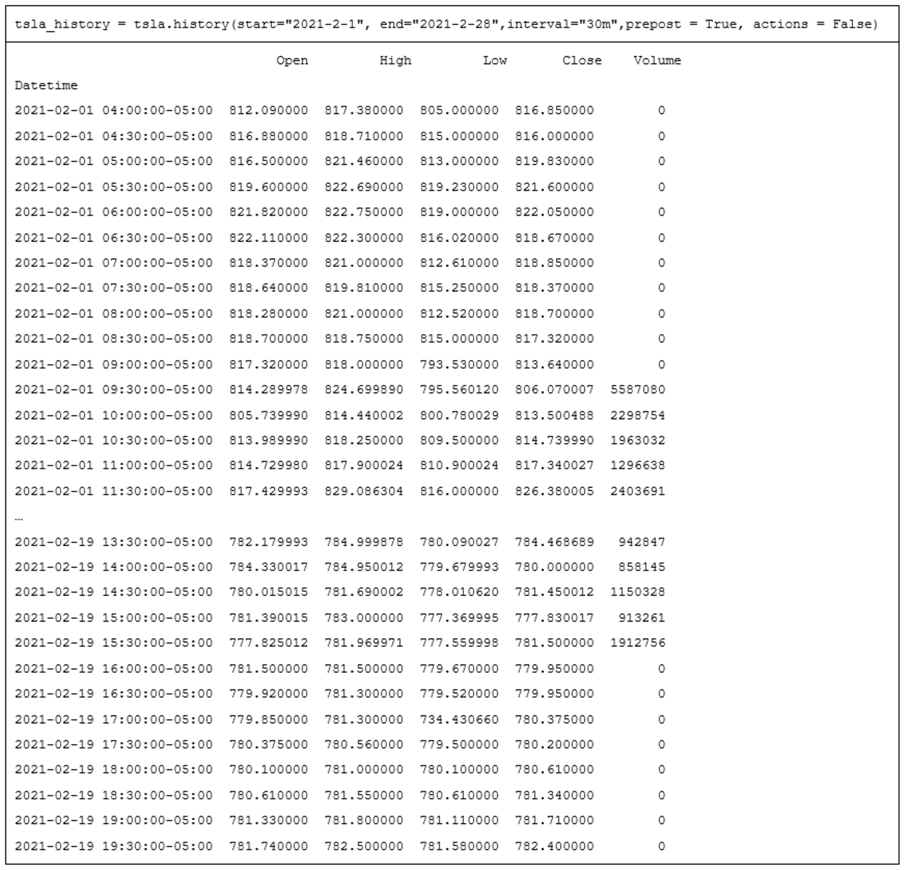 Third try at getting stock data with yfinance

The script within the window below starts with a pair of import statements for the yfinance and pandas libraries. The yfinance library reference is for extracting fields from Yahoo Finance. The pandas library reference is for controlling how the fields are displayed by the print command. Because yfinance is a library for Python, the display of outputs from yfinance methods can be controlled by Python display option settings.

The first substantive portion of the script starts by a reference to the yfinance Ticker method. The method assigns a ticker value (tsla) to a Python object named tsla. Then, the info fields and the actions fields for the Python tsla object are successively printed to the console (the IDLE output window). 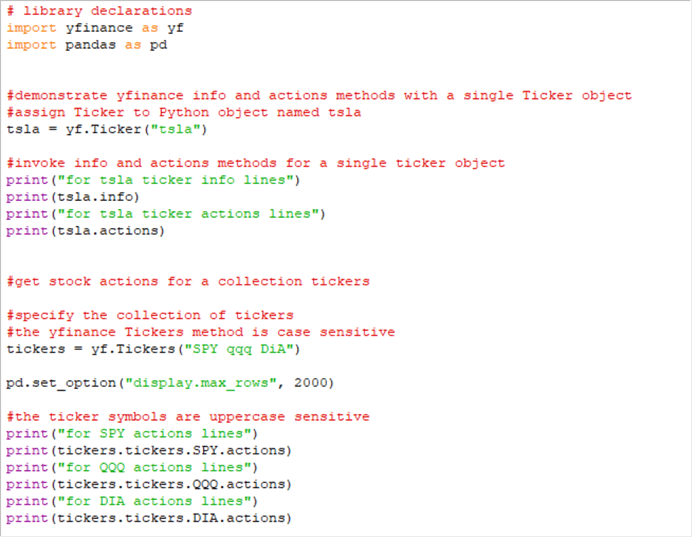 The first two fields with values for the tsla ticker are the info lines and the actions lines.

There is a set of actions field values for each of three tickers (SPY, QQQ, DIA) following the data for the tsla ticker. SPY, QQQ, DIA are three tickers that reflect values for widely monitored indexes, such as the S&P 500 (SPY), the top 100 NASDAQ stocks (QQQ), and the stocks in the Dow Jones Industrial Average (DIA). These three tickers each have their actions fields squeezed in the IDLE console. Recall that you can show the field values by double-clicking the button for a squeezed set of lines.

The following screen shot displays an excerpt from the IDLE output window of the tsla info field lines after they are un-squeezed by double-clicking the first button in the preceding screen shot.

The info field values appear as

For example, the first tsla info field has an attribute name of zip and a value of 94304.

Stocks are often classified by their sector and industry. Following the zip field value, you can see the sector field name, which has a value of Consumer Cyclical. On the last line in the excerpted screen shot, the industry attribute name appears; its value is Auto Manufacturers. 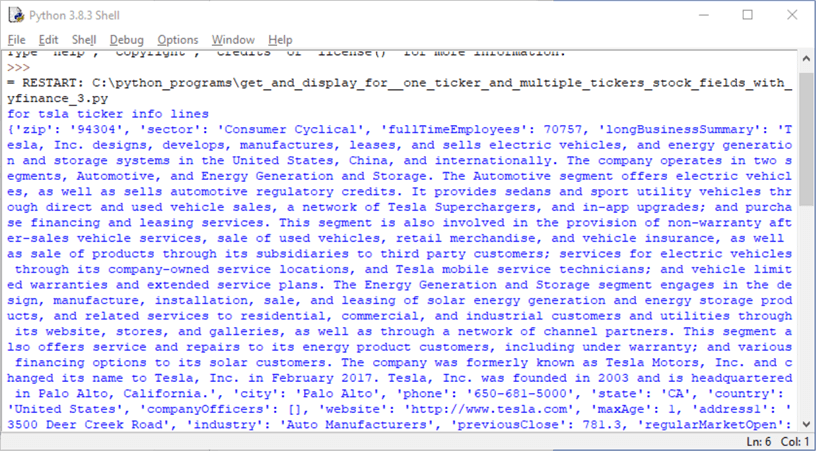 Pulling historical data from a file of stock symbols

This tip's Python scripts up until this point are appropriate for downloading data from Yahoo Finance for one or a relatively small number of stock symbols. However, it is not uncommon to require the downloading of historical price and volume data for scores or even thousands of stock ticker symbols. For example, if you needed to collect historical price and volume data for a watchlist of ticker symbols, you might typically track between 5 to 100 ticker symbols. To compare data science models for discovering stocks with the best growth potential or when to buy and sell stocks to maximize profits, you might need to collect data for thousands of stocks, such as all those on the NASDAQ, NYSE, and AMEX exchanges.

The Python script in this section is also of interest because it shows how to save collected data to a csv file. By downloading historical price and volume data to a csv file, you make it relatively easy to import the data into SQL Server. This can be useful for initially populating or updating a stock data warehouse in SQL Server. A freshly updated stock data warehouse can provide a basis for describing data, modeling a time series, determining the scope entities for which a model is applicable.

The Python script starts with the following library declarations.

The next block of code creates an empty list object named symbol. Then, a with open statement opens a file with a list of stock ticker values. Successive stock ticker symbols are appended to the symbol list object from the mssqltips_list_w_bad_ticker.txt file in the C:\python_programs path. The strip function in the append method removes trailing characters, such as carriage return and line feed after the symbol for a stock symbol. The code block concludes with the close method for the source file of ticker symbols.

Here is a Notepad++ image of the file with its stock tickers. Line number 4 purposely misspells a ticker symbol as FUNGU instead of FNGU, which appears in line 5. While there are only six symbols in this file, I have run this type of application with thousands of symbols in a file.

The next block of code sets the start and end dates for collecting historical data. The Python datetime module has a date class for specifying dates without associated times or time zones. As you can see, the format for the date specification is year, month, day. The code below populates the start object with a date value for February 1, 2021. Next, the code populates the end object with a date value for February 28, 2021.

The script for this section specifies a filename and pathname for receiving data collected with the pandas_datareader.data library. The assignment statements in the following Python code designate the filename (with file_out) and its pathname (with path_out).

The remaining code in the script appears below.

Here is a summary of key methods and processes in the try code block. This tip previously described the datareader and drop methods. If you feel the need, review the descriptions for these methods in prior sections.

If the try block does not execute successfully because of an error, then control passes to the except block.

Here is an excerpt showing the first 22 rows from an Excel spreadsheet open to the yahoo_prices_volumes_for_mssqltips_list_w_bad_ticker_to_csv_demo.csv file. 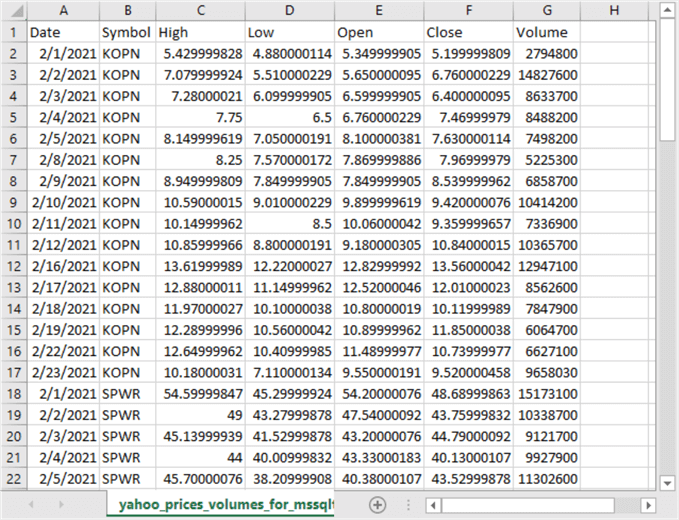 Here is another excerpt from Excel showing the final few rows from the csv file. 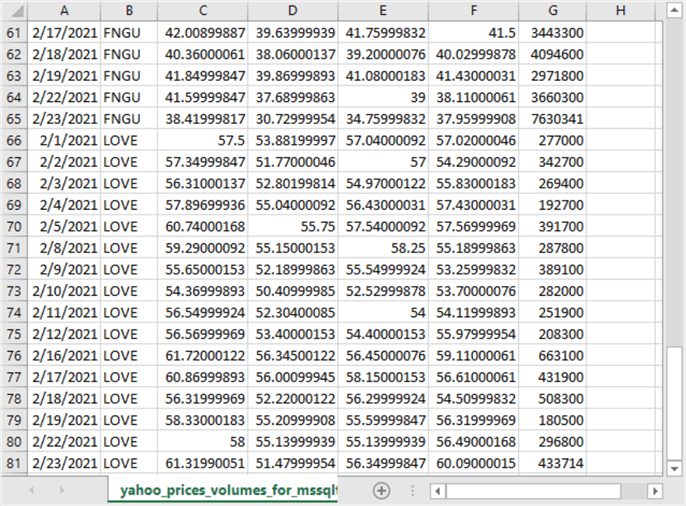 The following screen shot shows the log printed out by the script for this section. 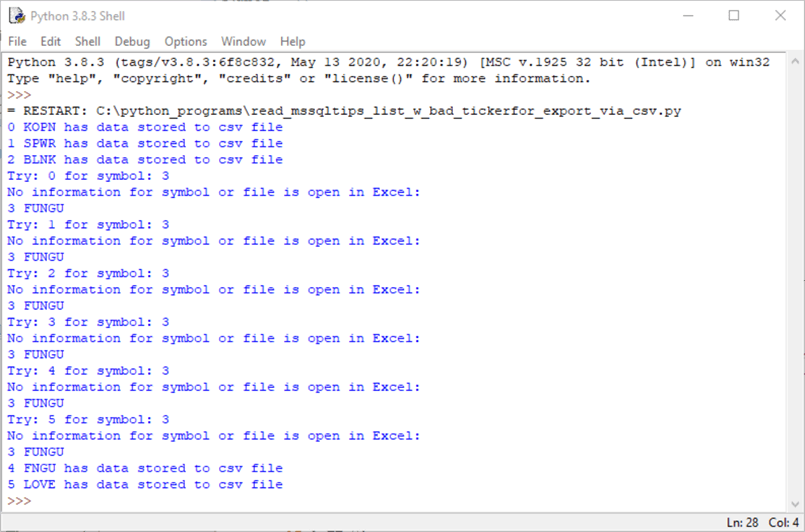 You can verify this tip's code by running the script in the download file for this tip. If Python is not currently installed on your workstation, you can download Python for Windows from https://www.python.org/downloads/windows/. You will also require the pandas and yfinance libraries for Python. Pip is a handy utility for installing libraries for use with a Python installation.

You can run the Python script from the "Pulling historical data from a file of stock symbols" section in this tip with sample symbol file (also available from the tip's download file).

Data Engineering a Solution with Python and SQL Server