Demonstrate some simple examples of how to build, populate, and query a data warehouse for time series data in SQL Server.  Please present sample code and results that facilitates adapting the solution to other time series datasets.

This tip demonstrates how to build on the prior tip by populating a data warehouse with the collected data.  More specifically, you will see how to create dimension and fact tables for a data warehouse.  You will also discover simple examples of how to query the data warehouse to answer common questions for time series data.

An overview of the data warehouse

The screen shot below shows a database diagram of the data warehouse model.  The model’s design can be easily adapted to time series data from many different domains. 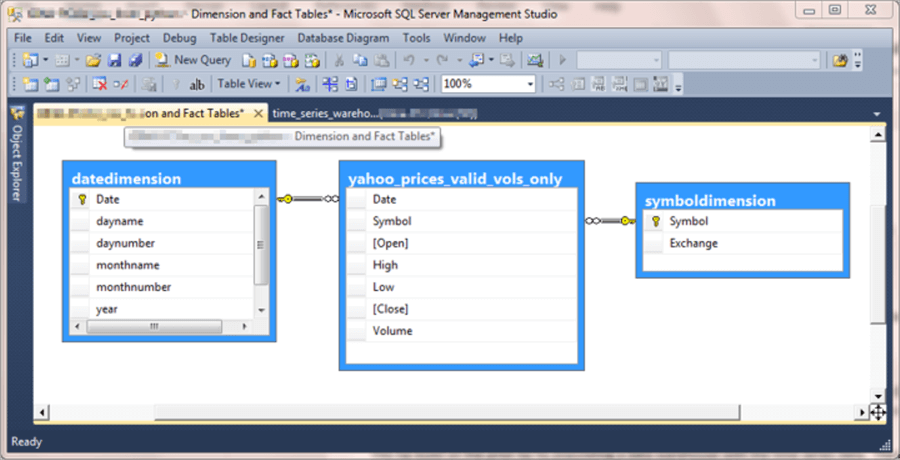 Building and populating the dimension tables

The following script populates and displays the datedimension table.  An insert statement populates the datedimension table from a select statement, which has an inner select statement named for_distinct_dates.  The query for_distinct_dates extracts distinct dates from a table named yahoo_prices_volumes_for_MSSQLTips.  The process for populating the table in the sub-query appears in the prior tip for collecting time series data for over 8,000 symbols from Yahoo Finance.  Dayname, daynumber, monthname, monthnumber, and year are computed fields based on date column values.

The following screen shot shows the first and last six rows from the datedimension table.

You will typically need a categorical dimension to track entities to which time series measurements belong.  This tip uses the name symboldimension for the table holding entity identifiers and other values that characterize entities.  The entities in this tip are symbols trading on one of three stock exchanges.  Each stock symbol is characterized by an exchange name where the stock symbol is listed for trading.

The following T-SQL script populates the symboldimension table based on two sources. 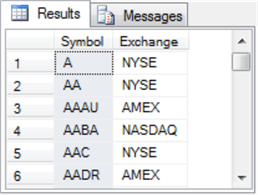 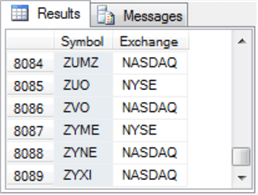 Building and populating the fact table

Here’s the script for specifying the fact table.  The fact table stores the time series data for the entities in the data warehouse.

Here’s a T-SQL script for populating the fact table from the yahoo_prices_volumes_for_MSSQLTips table, which contains the original source data from Yahoo Finance.

Here are excerpts from the full display of the fact table via a T-SQL script (select * from dbo.yahoo_prices_valid_vols_only).

Introduction to querying the fact and dimension tables

This section introduces you to some basics for querying fact and dimension tables with the data from this tip.  The following query computes three aggregations of the data for the fact table joined to the dimension tables.

Some readers may be able to enhance their understanding of the query code by examining its results set.

Is there a day-of-week effect?

One reason for performing queries on the contents of a data warehouse is to test different hypotheses about the warehouse contents.  For example, some manager or analyst may ask: are close prices consistently higher on one day of the week and lower on another day of the week?  This section reviews a couple of query designs with their results sets to illustrate different approaches for developing results bearing on a question like this.

Here’s the results set from the first query design.

The following script shows an adaptation of the preceding script.  Instead of reporting average close price and number of trading dates by day of the week across all symbols, the following script reports these results for a single symbol  -- namely, SPY, which is a symbol based on the aggregation of price and volume for all individual symbols in the S&P 500 index.

The largest average close price is on Friday for all the selected symbols, except ENPH.  This outcome is at variance with the results across all symbols where the average highest close price is on Wednesday.  The smallest average close price varies among the members of the select set of individual symbols.  Also, the smallest average weekday close across all symbols does not match the smallest weekday close for any of the select set of symbols.  The easy take-away from these query results is that there is no evidence of a consistent day-of-the-week effect 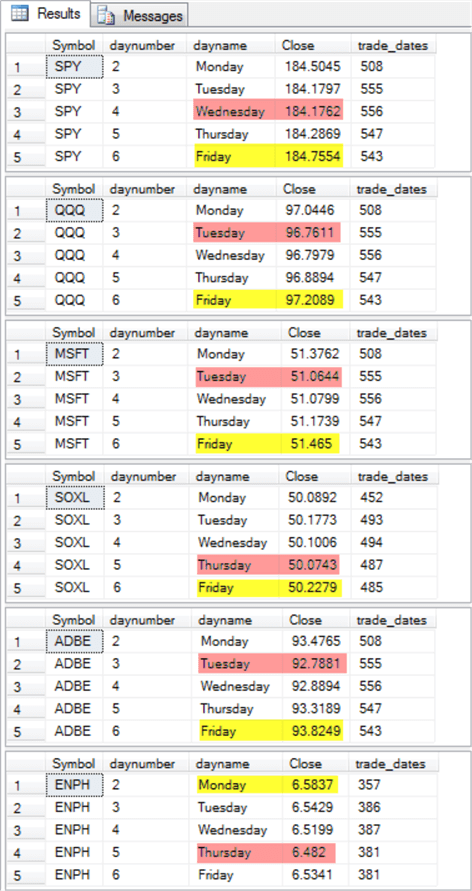 Try out the code examples for this tip.  All the referenced scripts are in this tip’s download file.  You will additionally need to run the scripts from this other tip to create the dbo.yahoo_prices_volumes_for_MSSQLTips table and ExchangeSymbols table to which this tip refers.