Time series data (from the internet and other sources) are becoming an increasingly frequent type of data for SQL Server professionals to encounter.  Time series data are defined by the association of data values with time periods, such as days or weeks.  For example, a meteorologist may want to track daily temperature and amount of rainfall from weather stations across the country or globe.  A manufacturing company may track daily inventory, new orders, and orders shipped by product over the past ten years.  Investment analysts and traders may track security prices by high, low, open, and close prices along with volume of shares exchanged on each day a market is open.

This tip uses Python with security price data from Yahoo Finance, because Python has an easy-to-use interface for extracting security prices on sequential trading days.  You can learn more about how to collect data from the internet with Python through these prior MSSQLTips demonstrations (here, here, and here).  This tip goes beyond prior ones in that it focuses on extracting data with Python via csv files.

When managing any kind of time series data there are at least three common tasks.  This tip gives you a simple demonstration for each of these tasks.

Before you can set up a time series dataset, you need to collect the data.  You may collect the data from your company's transactional or data warehouse databases.  You can also use a public internet-based source.  You must associate one or more measurements with two types of values: a time period and an item identifier.

The simple demonstration for this section collects time series data for a set of stock symbols from the MSSQLTips_4.txt file.  Here's a view of the file from a Notepad++ session.

The following screen shot shows historical price and volume data from the Yahoo Finance site for the Microsoft Corporation. 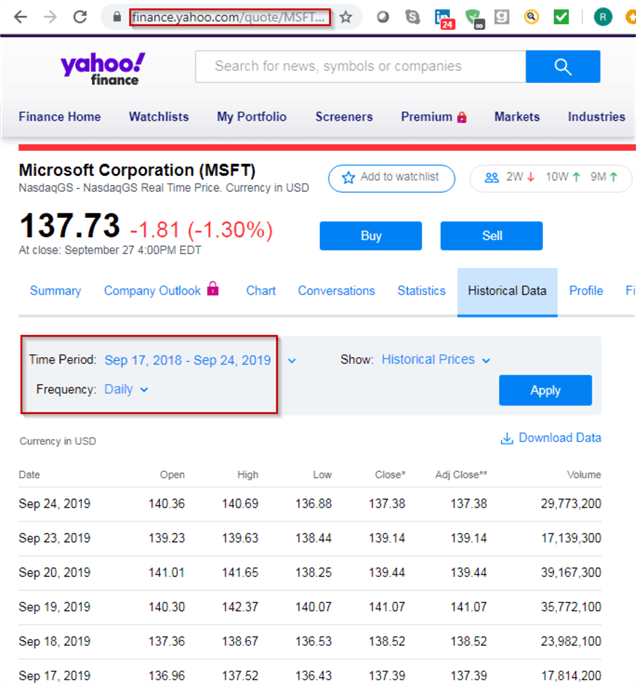 The following Python script is for collecting time series data for the symbols in the MSSQLTips_4.txt file from the Yahoo Finance site (finance.yahoo.com).  The script was saved with a file name of read_mssqltips_4_for_export_via_csv.py.  This script file can be run with the IDLE application that installs with Python version 3.6.  Step-by-step instructions for installing Python are available from this prior tip.  The instructions do not require any particular version of SQL Server.

Here's a summary of the operations performed by the script.

The preceding script writes the data to the yahoo_prices_volumes_for_MSSQLTips_4_to_csv_demo.csv file.  The following screen shot shows the csv file from Excel after the close of the market on September 24. 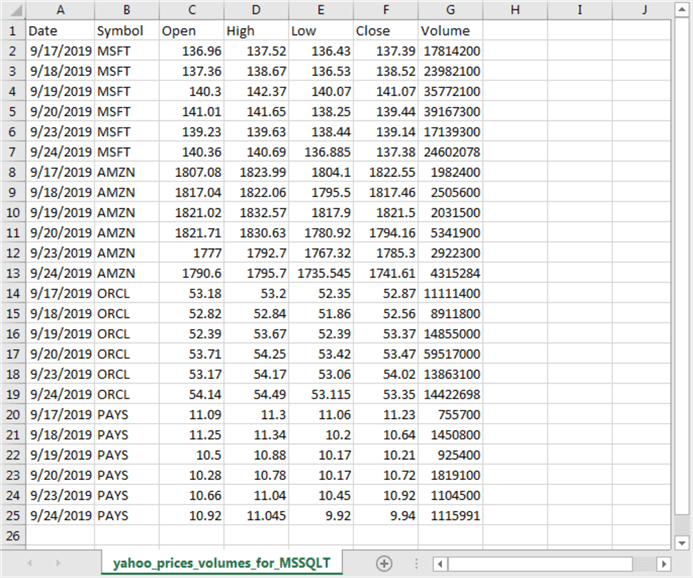 You can insert the time series data from the yahoo_prices_volumes_for_MSSQLTips_4_to_csv_demo.csv file into a SQL Server with a bulk insert command.  The following script demonstrates the process. 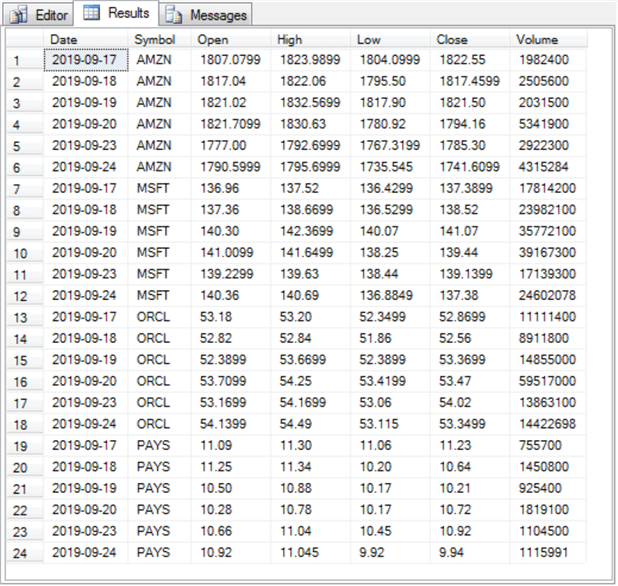 After you create an initial load of time series data in SQL Server, it is likely the time series data will need continued management in at least two ways.  This section presents the process and some code for implementing one of these maintenance activities.

The time series data users may ask for data on additional items beyond those in the initial load.  For example, users may request your code track price and volume data over the same range of dates as for the initial load for three more symbols, such as ENPH, INS, and KL.  You can start to satisfy this request with a txt file such as the one pictured below in a NotePad++ session. This file has the name MSSQLTips_3.txt, and it has the same layout as the txt file of ticker symbols for the initial load.

For your easy reference, here's the csv file created by invoking read_mssqltips_3_for_export_via_csv.py.  The csv file name from the referenced Python script is yahoo_prices_volumes_for_MSSQLTips_3_to_csv_demo.csv. 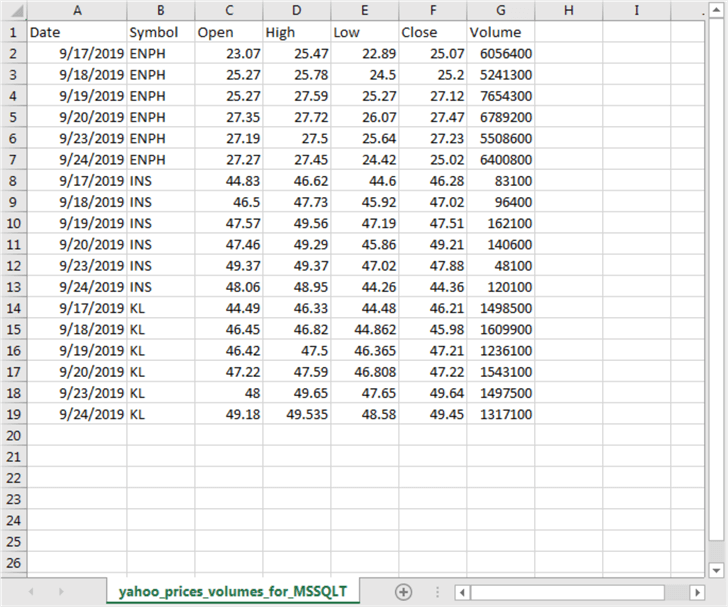 You can update the watchlist of historical price and volume data in SQL server previously populated in this tip.  This update can be accomplished with a bulk insert statement that pumps the yahoo_prices_volumes_for_MSSQLTips_3_to_csv_demo.csv file contents into the yahoo_prices_volumes_for_MSSQLTips table.  The following script shows the T-SQL code for updating the table from the most recently populated csv file.

The preceding script ends with a select statement that shows the watchlist table of historical price and volume data after it is updated with data for the ENPH, INS, and KL ticker symbols.  Recall that the watchlist table initially had historical price and volume data for the initial load for four other ticker symbols (AMZN, MSFT, ORCL, PAYS).

Here's the display of data from within SSMS.  The watchlist table contains forty-two rows of data.  This count results from six rows of historical data for each of seven ticker symbols. 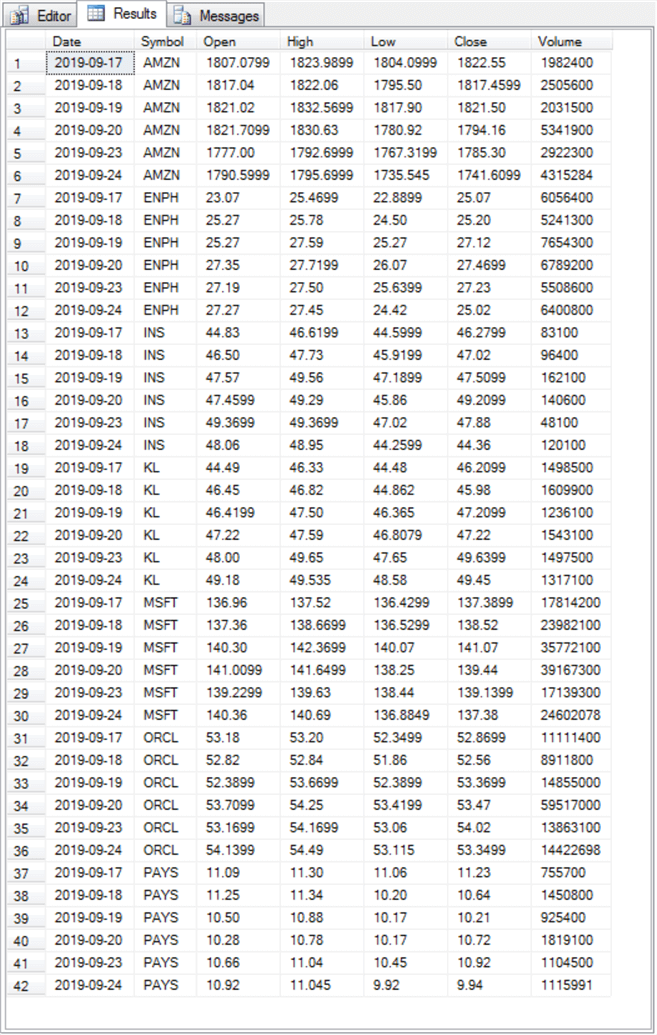 This section gives you an overview of the code changes for updating an existing table of time series values in SQL Server with data for an additional time period.  Up to this point in the tip, the initial load and the updated load for new ticker symbols both had data from September 17, 2019 through September 24, 2019.  When working with time series data, it is common to update the data for each additional period on a regular basis, such as once per day.  Because our examples use sequential trading days and September 25, 2019 is not a weekend day, we can demonstrate the addition of data for a trading date by inserting a row for all the symbols with the new trading date.

The screen shot below shows a Notepad++ session with four ticker symbols from the initial load as well as the update load with three more symbols.  The name of this new file of ticker symbols is MSSLQTIPS_7.txt.  This file with a set of consolidated ticker symbols from both prior loads will be the source for the third load that adds a row of fresh time series data for each ticker symbol. 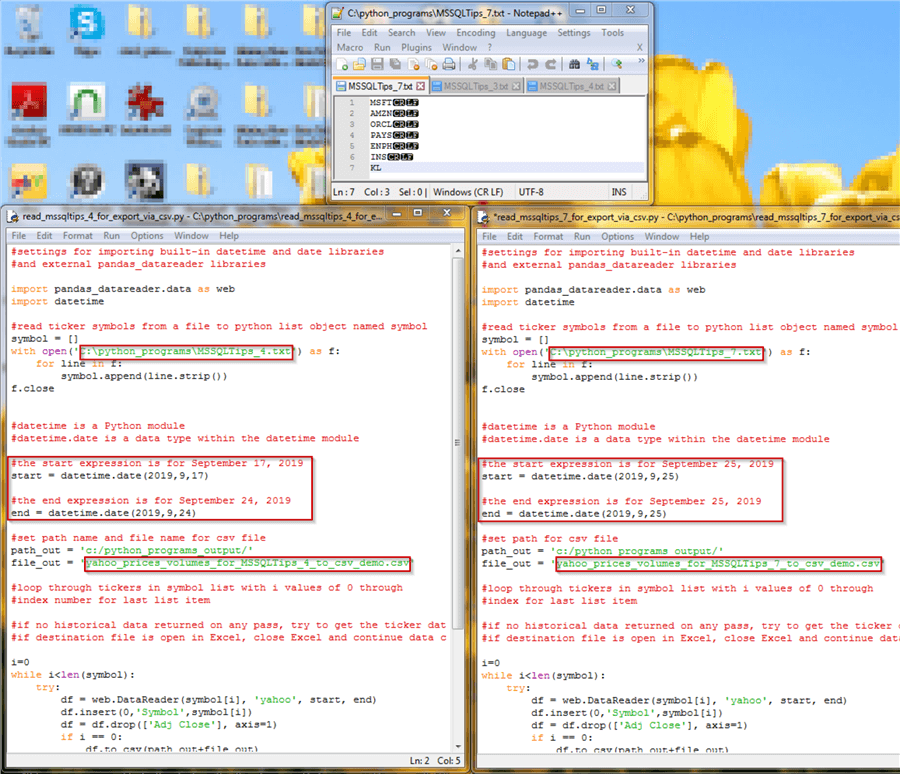 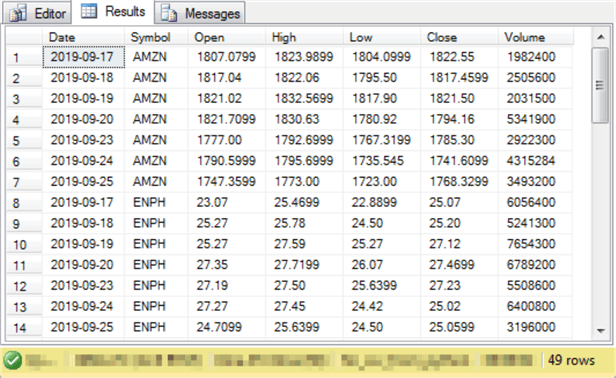 You can try out the code examples for this tip.  All the scripts referenced in this tip are available from this download file.