Our company needs HTML table contents from different web pages around the internet to support our analytical initiatives and for basic data tracking requirements. Please provide a sample programmatic solution to download HTML table contents into SQL Server tables that is cheap, easy to implement, and runs quickly.

The introductory solution on scraping web pages with Python for SQL Server did not consider HTML tables as sources for populating SQL Server tables. However, HTML tables are widely used at web sites because of their flexibility for containing and arranging data. HTML table tags contain a set of row tags each of which contains a set of cell tags. Each cell within a row set can contain text, links, images, and other tagged content. You need to account for this kind of diversity when devising data extraction strategies for HTML tables. Also, a single web page can easily have multiple HTML tables. Therefore, before starting to extract and download data from an HTML table within a web page at a web site, you may need to select a specific table from a web page at a site.

This tip demonstrates how to extract all NASDAQ stock ticker symbols and some related company data from the NASDAQ web site. A ticker is an alphanumeric string representing a stock. NASDAQ is a stock trading exchange for thousands of companies from throughout the world. Many of these companies are technology-related so they are potentially of interest to SQL Server professionals.

The NASDAQ web site also makes available stock tickers for other major exchanges, such as NYSE and AMEX exchanges. These additional resources enable you to readily extend the approach demonstrated here for stocks traded on other non-NASDAQ exchanges. Also, the same general approach to downloading ticker data from HTML tables on the internet is broadly applicable to web sites containing data for different types of domains, such as from congressional members to jail inmates. Just before the Next Steps section, this tip itemizes some general guidelines for downloading data from any kind of web page to SQL Server.

Getting started with web scraping with Python for SQL Server

There are three preparatory steps for scraping web pages via Python with HTML tables for SQL Server tables.

The Python software and associated external libraries are available for download from the internet without charge. This makes the approach cheap - actually, FREE!

There are two key libraries to reference when web scraping with Python 3.6. The Requests library is a built-in Python library that lets your code specify a URL and receive a response from the site. If your code connects to the url successfully, Python will get a response from the web site just like a browser does when you point a browser at a URL. The text from your Python request to the URL is coded as HTML text. You can inspect the returned HTML text and compare it to a browser display of url content to get a feel for how data is encoded in the HTML.

Also, Python is both an exceptionally robust language and an easy language in which to program. These considerations are among the reasons that Python is growing rapidly in popularity among developers. This is, in turn, among the considerations why Microsoft opted to allow 2016 and 2017 versions of SQL Server to launch Python programs, but this tip shows you how to launch Python programs from any version of SQL Server that can run the xp_cmdshell extended stored procedure, which is at least as far back as SQL Server 2000.

As indicated in the Solution section, this tip reveals how to download selected content from an HTML table at the NASDAQ web site. The heading and first several rows of the HTML table appear in the following screen shot. 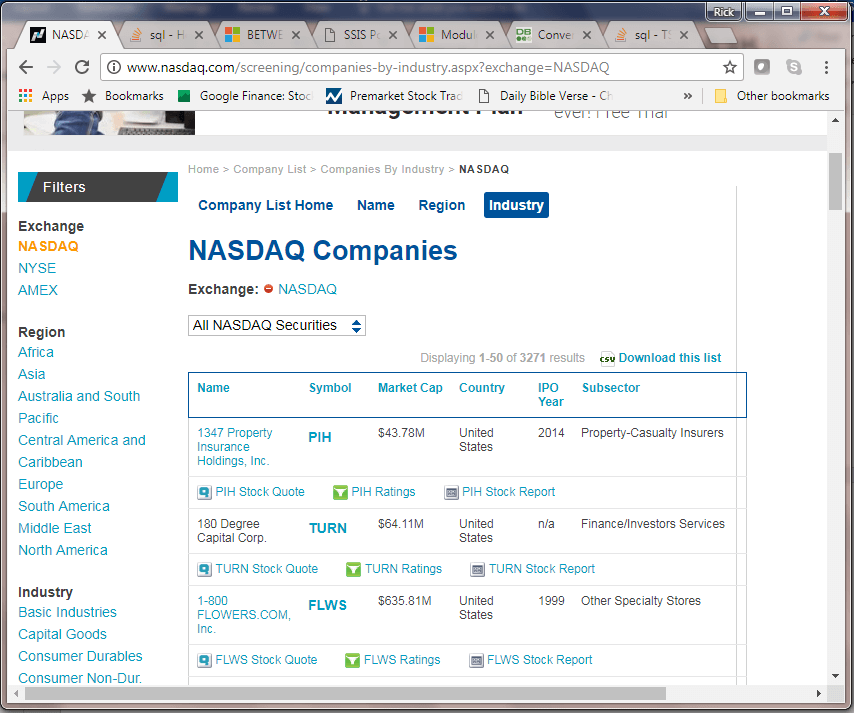 The next screen shot shows an image towards the bottom of the page from the preceding screen shot. 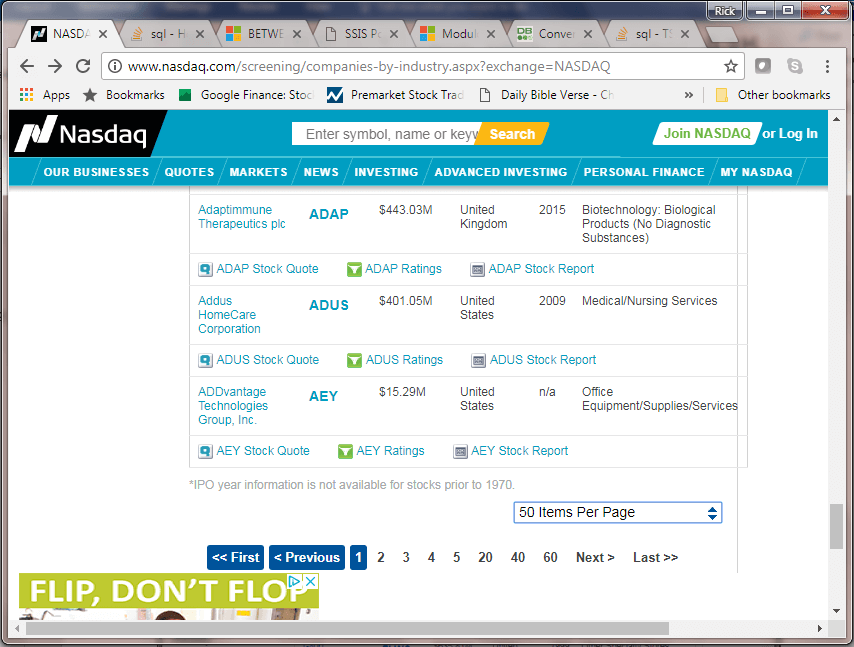 The following screen shot shows a simple Python script for getting all the row values from the HTML reviewed in the preceding section.

Notice that the argument for the get method includes a pagesize parameter with a value of 4000. This value is more than large enough for the extraction of all NASDAQ ticker values and associated company data from the NASDAQ exchange web site.

The HTML page returned by the get method has several different table tags. The following screen shot from Notepad++ shows an excerpt from the top of the table tag for the table examined by browser views in the preceding section. The excerpt was copied from the IDLE output application that installs automatically with Python installations. Results were copied to Notepad++ because they were easier to examine in this application than IDLE. 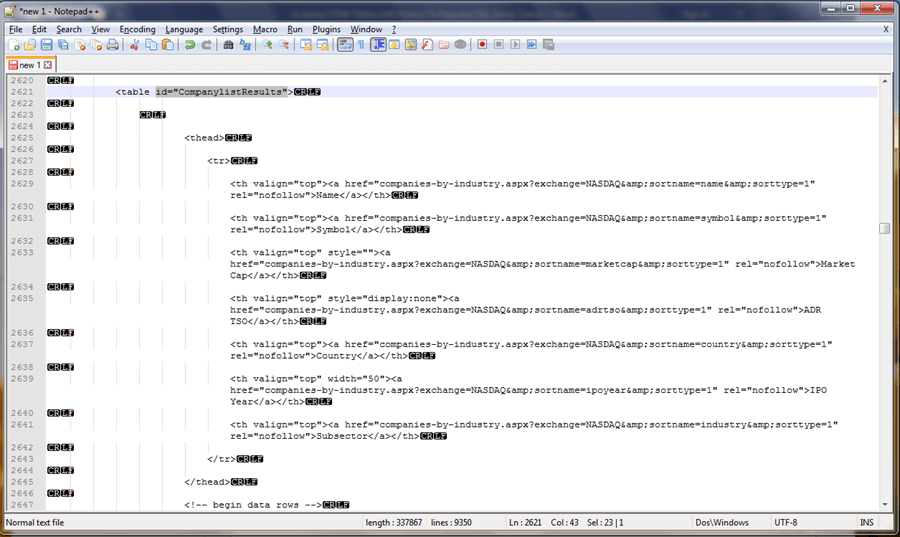 The next excerpt from the CompanylistResults table block shows the first two rows of marked up data for the first ticker - the one with a value of PIH. 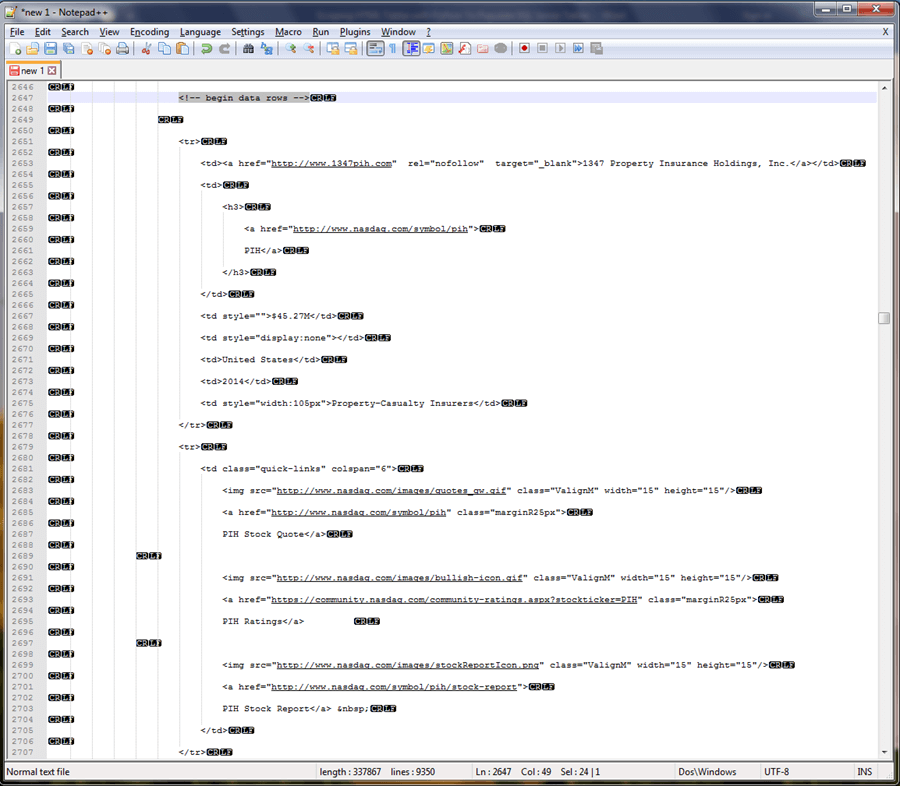 Programmatically listing the table rows for an HTML table

The following script is Python code for listing the rows and cells of the CompanylistResults HTML table at our source url. The code is from a file named all nasdaq companies with beautifulsoup.py. The two parameters at the end of the url for the get function argument designate the specific type of tickers (NASDAQ) and the maximum number of tickers (4000) that the script processes. For example, if there were only 3272 NASDAQ tickers when the ticker values were extracted, then information about stocks would only be extracted for 3272 stocks although the pagesize parameter is set to 4000.

Comment lines start with a # sign. This Python code sample starts similarly to the one for inspecting the page. Namely, it extracts all text values from the page and saves them in a Python variable (data). However, instead of immediately printing the page contents after this, the code transfers the text values to the BeautifulSoup library for parsing with the its html parser; the BeautifulSoup library also has a xml parser.

The next line of code extracts and saves the HTML for the table with an id value of CompanylistResults. This table contains all NASDAQ tickers along with associated information, such as company name and market capitalization.

Within each row of the selected table, there are the cells for all column values according to the headings denoted in the thead block. Nested for loops pass through each cell value for each row in the table.

Two functions clean up the output from the Python code.

An excerpt from the preceding script's output appears in the following screen shot. The first seven lines of output for the first stock are highlighted. 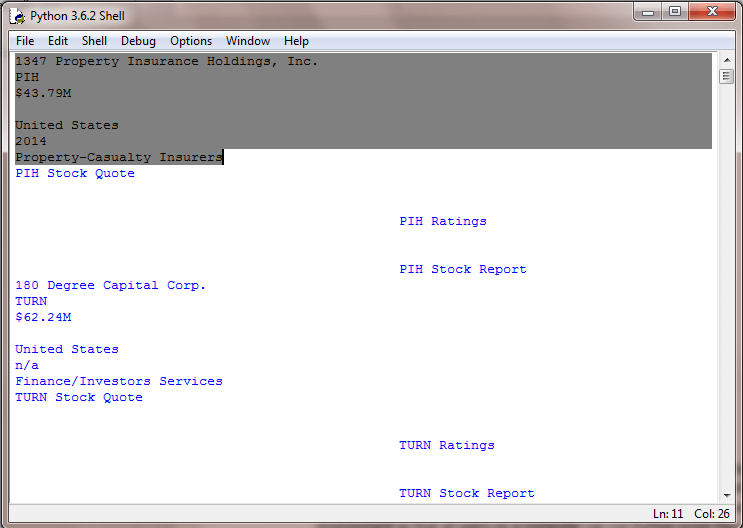 You can confirm the validity of the extracted row values by comparing those from the preceding screen shot with those from the first excerpt for the browser page of NASDAQ ticker symbols and related information in the Visually inspecting HTML table sources for web scraping section. Slight differences between the Python output image and the browser output image are possible when the two images were taken at different times. The stock market data are like data from a typical production database - it can change so long as transactions are occurring or other processing is occurring to update the data in a database.

To help clarify this specific transfer of results from an HTML table, the processing is discussed in three distinct steps.

The Windows batch file to run the Python program has the name all nasdaq companies with beautifulsoup.bat. There are two commands in the file.

The first thirty-two rows from the #Results table in the preceding select statement appears in the screen shot below.

Just as the first and third lines contain values that map to NULL values in SQL Server so does the very last line in the #Result table. These NULL values are for lines that do not need to be processed for converting HTML table values to SQL Server table values. 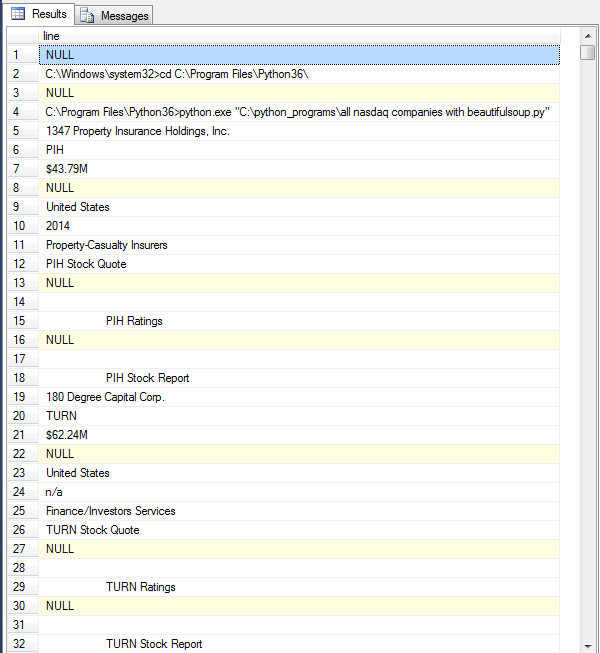 The following T-SQL excerpt demonstrates how this step is accomplished with a sequence object and a new temporary table named #Result_with_to_delete_row_number. 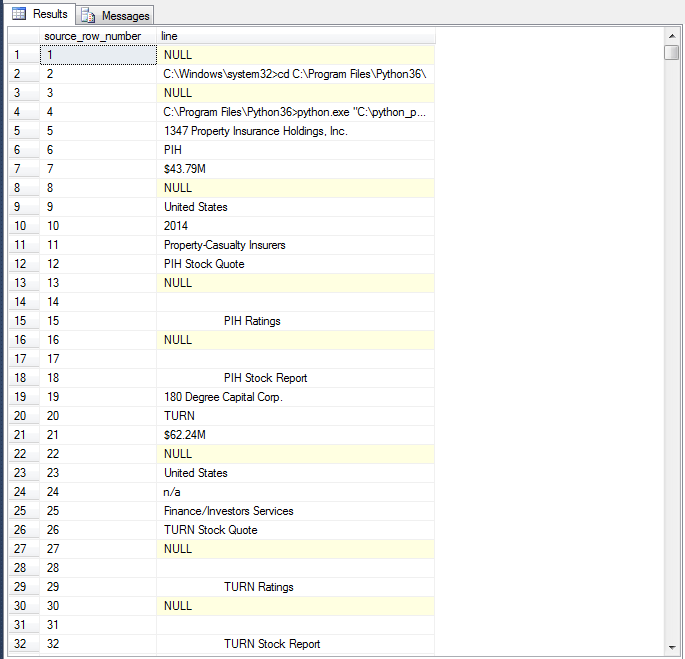 Here's a screen shot with results for the first two stocks from the second processing step. You can compare these values to those from the preceding screen shot to confirm how the code operates.

An excerpt from the #pivotsource result set for the first two stocks appear in the following screen shot. There are several changes to these 12 rows from the output in the preceding screen shot showing second-step processing results. 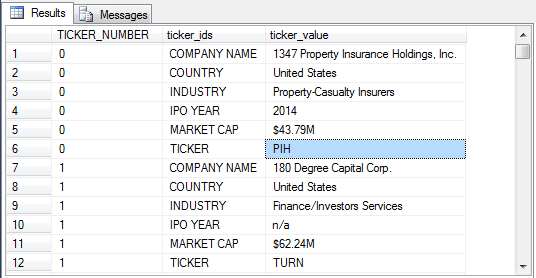 The code for pivoting the values in the #pivotsource result set appears next.