I need a simple and easily modifiable SQL Server T-SQL expression for computing moving averages for time series data. Also, show how to compare moving averages for different lengths, such as short duration of just a few periods versus longer-range durations covering hundreds of periods. Finally, demonstrate the expression's use in a production-scale context where it develops results for thousands of time series.

Time series data are sequences of values collected at regular intervals. These can be the number of weekly shipped orders by item from an online sales catalog, the monthly unemployment rate, or quarterly Gross National Product (GNP) values - with one series for each country.

An initial step in analyzing time series data with SQL Server is getting the data into a database. MSSQLTips.com presented a prior tip for downloading end-of-day stock prices and volumes for all the companies listed on the NASDAQ exchange with historical prices and volumes in Yahoo Finance. Historical data commence as early as the first trading day in 2014 and continue through early November 2017. This data source includes historical price and volume time series for nearly 3,300 ticker symbols. A ticker symbol is a short alias for a company's name. There are over 2.6 million rows of data. The time series from this prior tip were stored in a SQL Server database that will be mined with moving averages in this tip. As additional tips are added for mining time series data, the collection of code will gradually build a data mining library suite for analyzing time series data with one consistent data source.

This tip has several key sections intended to progressively grow your understanding of data mining with moving averages.

A quick introduction to this tip's time series data

The following screen shot shows the queries returning the first 5 rows and the last 5 rows for the AAAP symbol. For this symbol, trading did not start until November 11, 2015. This is essentially the initial public offering date for the AAAP ticker symbol. Furthermore, the last date with trading values was on November 7, 2017. When the snapshot was taken, Yahoo Finance had not yet started updating this ticker's historical data for November 8, 2017. 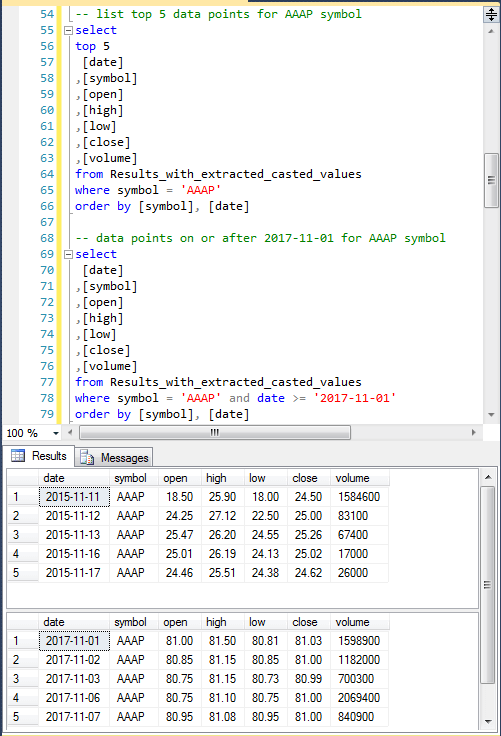 The next screen shot shows the results from a comparable pair of queries for the AAOI ticker symbol. In this case, the initial public offering was before the first trading date in 2014 (January 2, 2014). Beyond that, this symbol's trading data extends through November 8, 2017 - one day later than the data for the AAAP ticker symbol. As of the time this tip is being prepared (December 2, 2017), the values in our dataset precisely match, except for the most recent date, those in Yahoo Finance database for AAOI. It is likely that Yahoo Finance was still loading historical data for AAOI when data were harvested from Yahoo Finance. It is also likely that the incomplete status of the update for November 8, 2017 explains the difference for that day between Yahoo Finance and this tip's sample dataset. 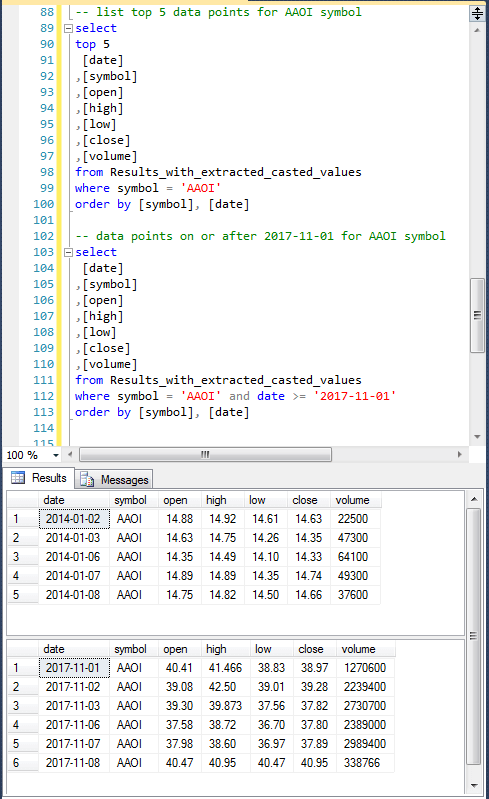 The next screen shot shows a count of ticker symbols by last date. There are 3266 total symbols in the sample dataset for this tip. 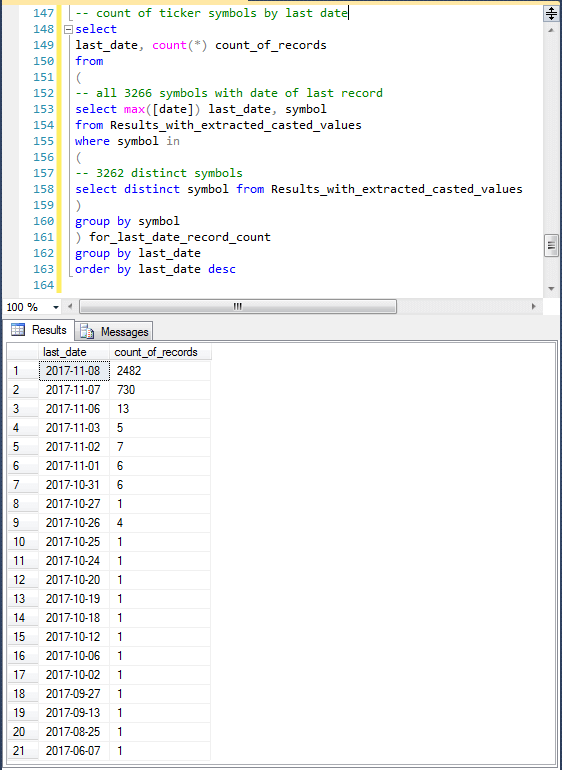 How to compute a moving average

The smoothing operation of a moving average comes from the fact that each moving average value is itself an average of several other data points. When moving from one period to the next in a moving average time series, all except for two of the raw values contributing to each of the averages are the same. This substantially dampens the variability between moving averages for two contiguous periods versus raw time series values for the same periods.

The following screen shot displays the first nineteen rows of the result set with the first six columns. 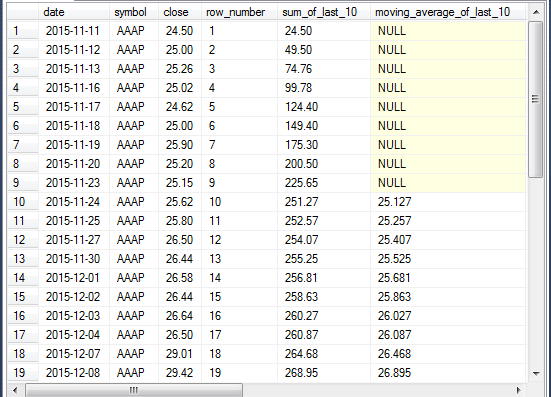 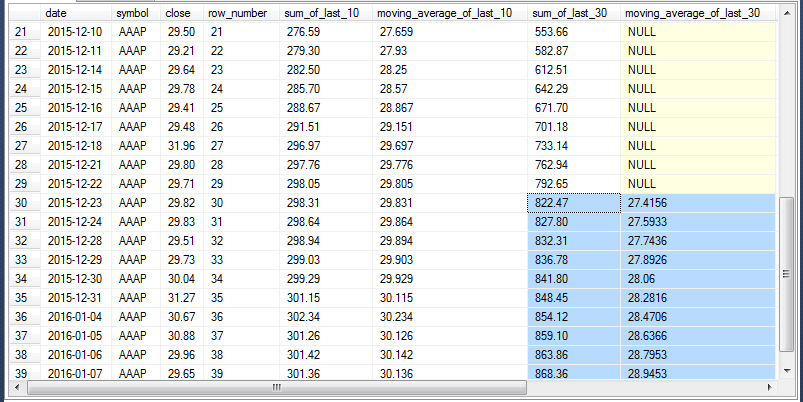 Now that the tutorial demonstration is completed, let's review the code for computing moving averages for all the stock tickers in the Results_with_extracted_casted_values table within the AllNasdaqTickerPricesfrom2014into2017 database. The following script shows an approach for computing moving averages for periods of ten, thirty, fifty, and two hundred for all ticker symbols.

How to detect an uptrend based on trending moving averages

There are many reasonable approaches for assessing if moving averages are in a trend. In this tip, the means are declared to be in an uptrend only when

By examining the values of the moving averages before and after a day, you can assess if the day is the start or end of a contiguous block of uptrend days.

The code below returns start and end dates for contiguous uptrend blocks throughout a time series. In trying to decipher and use the code below, it will help if you understand a few basic features.

The duration and peak close value for uptrends vary from one uptrend to the next across and within ticker values. However, having just two uptrends in the time series for a ticker symbol is relatively rare. You are encouraged to change the ticker to another one that may be of interest to you. For example, the MSFT ticker symbol for Microsoft has ten uptrends.

One best practice for analyzing uptrends is to see if you can uncover some material facts that help to explain an uptrend. For example, was the company sponsoring a stock buy-back program that reduces the number of outstanding shares and therefore drives up the earnings per share? If you were tracking the unemployment rate, you might look at the Gross National Product to see if it is falling at a time when the unemployment rate is rising; this would suggest workers are being laid off as the economy weakens. The point here is that the more you know about the time series you are analyzing, the better equipped you will be to interpret why series changed previously and how they will change in the future. 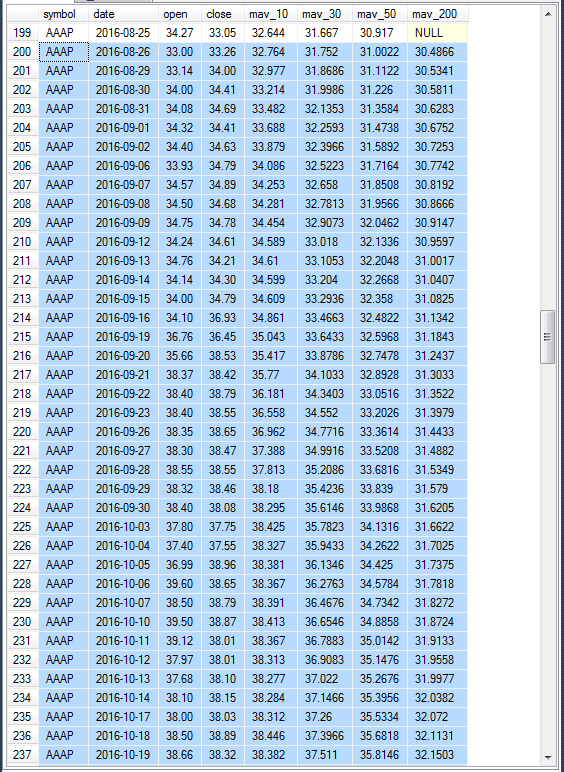