A reversal in a time series signals a turn-around in the direction of the values within a time series. It is often useful to learn about reversals as quickly as possible so your business can avoid bad consequences from unexpected outcomes. For example, it is better to have an ample supply of materials in inventory for servicing orders before clients make other arrangements for meeting their requirements because of unshipped orders from your firm. Reversal detection is an especially popular topic for financial securities time series. You can sometimes achieve more gain from a security by purchasing stock in a company before others buy it and drive the price up. Similarly, you can minimize the loss from a security’s price through by selling it in the initial stages of a price decline.

There are multiple indicators for shining a light on time series reversals. One indicator that has stood the test of time is the Relative Strength Index (RSI). This indicator was initially proposed back in 1978 by J. Welles Wilder in a book titled "New Concepts in Technical Trading Systems". Numerous authors contributed content about how to compute and/or use RSI (here, here, here, and here). It is the continuing stream of the content about RSI over a span of decades which suggests its value for trend reversal detection.

A prior MSSQLTips.com article from several years ago illustrated how to compute the indicator with a T-SQL script as well as demonstrate a use case for the RSI. This tip revisits the topic to describe in detail an algorithm for computing RSI values. The description is then linked to T-SQL code so that you can clearly understand how different code blocks link to elements in the RSI computational algorithm. The earlier T-SQL code for computing RSI is improved to have more precision and to be more flexible in accommodating different ticker symbols and different date ranges. Beyond these refinements, this tip illustrates how to compute RSI values for time series from the Stooq.com historical data source, which is free and easy to use with SQL Server.

The RSI is an oscillator. That is, its range of values extend from a high value of 100 through a low value of 0. RSI values depend on the ratio of the average percentage gain to the average percentage loss over a set of periods within a timeframe. The default timeframe value of 14 trading days is widely used, but some analysts prefer longer or shorter timeframes. Other analysts apply the RSI with multiple timeframes to facilitate their analyses of reversals in time series. This tip focuses on how to compute the RSI with its default value of 14 periods. The tip also focuses on the computation and verification of RSI values for three securities.

If the average loss equals 0 because the all the previous periods returned gains, then the prior RS expression does not compute because of a 0 divisor. In such a situation, RS should be assigned a value of 0.

The RSI is computed with the following expression. It is this expression which causes the RSI to vary between 0 and 100.

In practice, RSI rarely reaches its theoretical extreme values of 0 and 100. If RS equals 0 because all the periods in the timeframe have a 0 loss, then RSI equates to 0. As the average loss for a period grows from 0 in comparison to the average gain, RSI increases in value relative to its theoretical limit of 100.

The centerline RSI values of around 50 are also sometimes used in reversal analyses.

The sample dataset for this tip

The sample dataset for this tip includes selected time series data for three ticker symbols from the stooq_prices table in the DataScience database. Three csv files are included in the download for this tip with the time series data for which RSI values are computed. Stooq.com maintains a free historical database for stock prices. A prior tip introduces SQL Server professionals to this data source.

The query below followed by its results set selects the three ticker symbols for which RSI values are computed in this tip.

The next query and its results set shows the first five time series records for the AAPL ticker that are included in this tip. 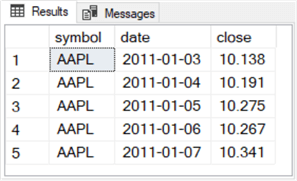 The following query and results set display the last five records for the GOOGL ticker that are included in this tip. 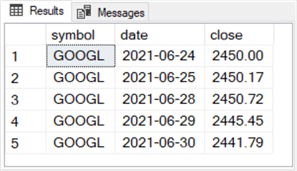 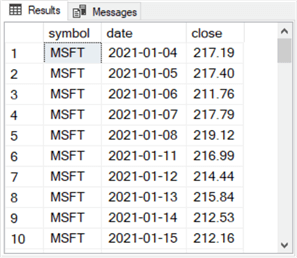 Here is an excerpt with the last ten rows from the results set for the preceding query. The row numbers are 73 through 82. The last row number is 82 because there 82 trading dates in the date range for this tip. The calendar dates April 24, 2021 and April 25, 2021 are weekend days on which the US stock market is closed. Therefore, these two weekend dates do not appear in the time series. 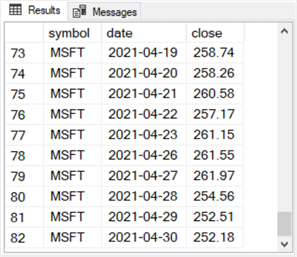 Here are three more queries that show the count of trading dates in this tip for each of the three ticker symbols in the tip. These queries reference three local variable (@symbol, @start_date, and @end_date) from the top of the preceding query.

Here’s the results sets from the three select statements in the preceding code excerpt. This query confirms that each ticker symbol in the dataset for this tip has data for 82 trading dates. 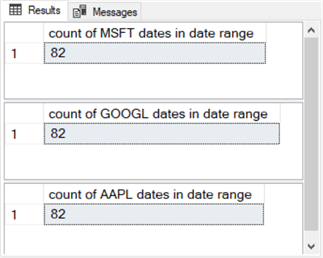 There are two main parts to the T-SQL code for computing RSI values. The first part creates a temp table and populates selected column values in the table of 82 rows. The second part focuses on computing RSI column values for the temp table initialized in the first part. In addition, the second part also populates selected other columns, such as for average gain and average loss, which are required to compute RSI values.

The inner query named for_14_row_avg_gain_loss pulls data from a table named stooq_prices in the DataScience database. The stooq_prices table is queried in the preceding section to familiarize you with some types of data it contains. The columns extracted with the inner query include symbol, date, and close. Additionally, several computed fields are populated in the subquery and further modified in the outer query as well as some trailing T-SQL code.

The outer query computes average gain and average loss values over the first fourteen rows of the #for_all_avg_gain_loss table. The outer query also specifies two columns named "relative strength (rs)" and rsi for the #for_all_avg_gain_loss table. These columns are for storing RS and RSI column values computed in the second part of the T-SQL code. At this point in the process, the values for these two columns are specified to contain null values.

After the initial select statement with inner and outer queries, a pair of update statements moves the avg_gain and avg_loss values from the fourteenth row to the fifteenth row and clears the avg_gain and avg_loss values from the fourteenth row. This movement of two column values from the fourteenth to the fifteenth row is necessary because the average of the first fourteen rows in the gain and loss columns is computed with a SQL Server avg window function. The preceding and current row clause of the function computes the average gain or loss and stores the average in the current row (row 14). However, the RSI computational algorithm calls for the first average gain and loss column values being saved in the following row (row 15 with the default timeframe of 14 periods).

The final statement in the script below is a select statement that displays the contents of the #for_all_avg_gain_loss table.

Here are two excerpts from the results set for the select statement at the end of the preceding script.

The following script shows the T-SQL for implementing this kind of dependence on two rows for avg_gain and avg_loss column values. The script is heavily commented for details so that this tip’s code commentary focuses just on major issues.

Here are two excerpts from the results set for the select statement at the end of the preceding script.

This final tip section aims to validate the T-SQL code for computing RSI values by comparing results from the T-SQL code from this tip with another source based on a spreadsheet. The spreadsheet was published along with a technical trading tip from StockCharts.com. The results are compared for three ticker symbols (AAPL, GOOGL, MSFT) for trading dates from January 4, 2021 through April 30, 2021. Close prices are derived from the Stooq.com database. If you change any of these conditions, you can obtain different results.

The following two screen shots show the first and last 26 rows of the GOOGL RSIs tab in the "RSI workbook for GOOGL and AAPL and MSFT.xlsx" file. 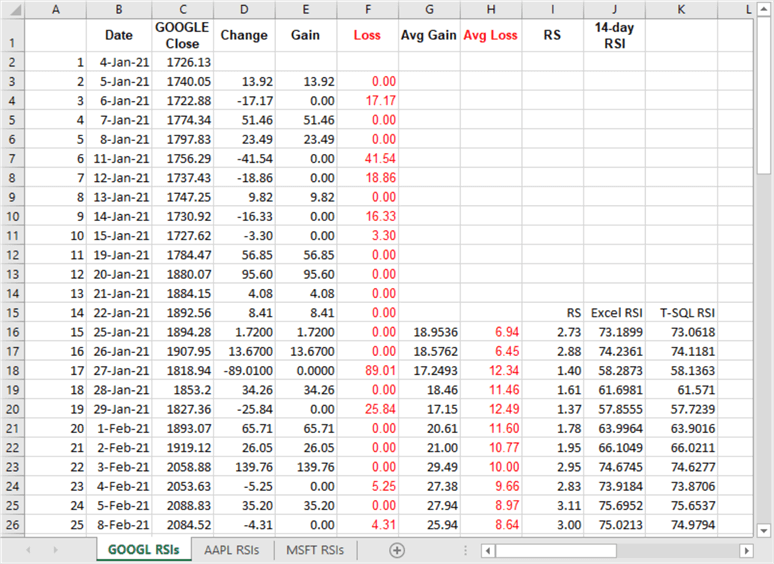 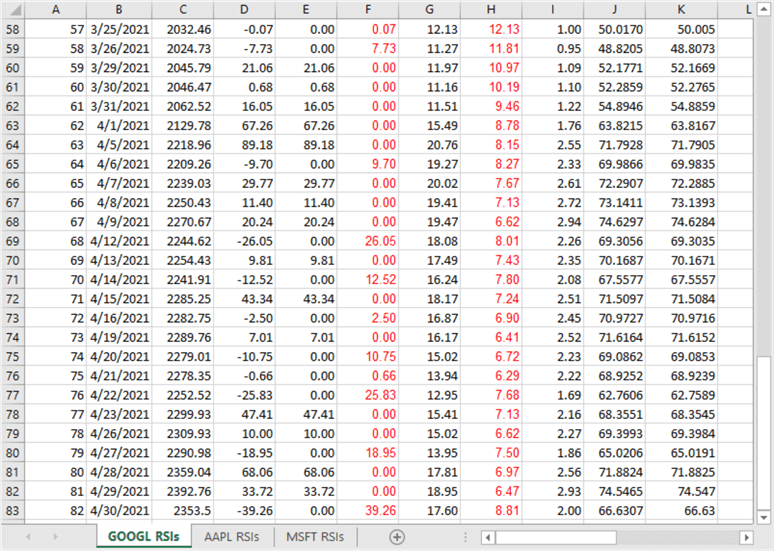 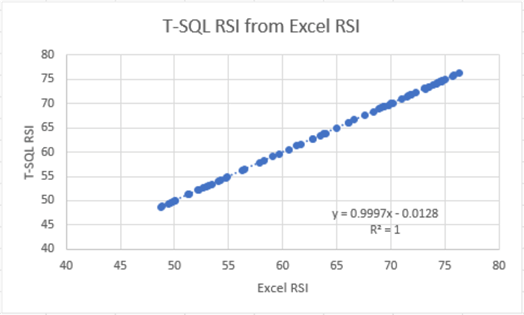 The following table shows the trend line statistics for each of the three symbols. The main point of this table is that for all three symbols the variance of the T-SQL RSI values is completely accounted for by the variance of Excel workbook file (because R2 = 1). The T-SQL presented in this tip matches the corresponding results from the spreadsheet file available from the StockCharts.com site as well as from download for this tip.

Your next steps with this tip are to confirm that you can detect reversals for any financial security ticker over whatever date ranges you prefer to analyze. By examining how RSI reversal detection worked in the past for identifying profitable trades, you can discover how it may work in the future.

The download for this tip includes three files that will allow you to replicate the results prepared in this tip. The download includes: