Collecting stock symbol data over multiple years can allow you do to time series analysis on stock prices.  In this tip we look at how to download stock prices for all stocks over a set period of time and load the data into SQL Server for analysis.

One of the most common questions among data professionals in the finance industry is how do I collect historical price and volume data for a lot of security symbols from Yahoo Finance (https://finance.yahoo.com/).  The Yahoo Finance site is interesting because it provides free time series data on tens of thousands of securities from multiple markets across the globe.

This tip demonstrates how to import Yahoo Finance time series data into a SQL Server table.

Some sources for collecting ticker symbols

Yahoo Finance maintains an immense amount of historical time series data about symbols for securities, but it is not straightforward to know all the symbols tracked.

Stackoverflow.com offers several alternative answers to the question of how to get a complete list of ticker symbols from Yahoo Finance for one or more stock market exchanges.

Investexel.net published an Excel workbook file with many security symbols.  The data for their symbol list was gathered in September 2017.  To my knowledge, the web site has not updated its free, publicly available list since then.

Here’s a screen shot from the eoddata site from which you can download its list of ticker symbols for an exchange.  The Exchange selection box allows you to pick from many international exchanges, including the three exchanges used in this tip (NASDAQ Stock Exchange, New York Stock Exchange, and American Stock Exchange).  Clicking the DOWNLOAD SYMBOL LIST link downloads a txt file with Symbol and Description columns for ticker symbols in the selected exchange.

Here’s an excerpt from the symbol list from within Windows Notepad.  The preceding screen shot and the one below shows the first ten symbols in alphabetical order from the NASDAQ Stock Exchange, but a complete list of symbols for an exchange downloads.  You must have a standard membership to perform the download, but there is no charge for a standard membership. 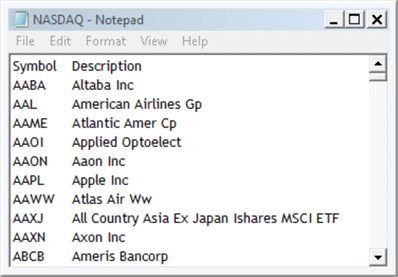 After I downloaded the results from eoddata, I added another column to indicate the exchange from which the symbol was selected.  The rows of symbol data were arranged alphabetically by symbol within exchange.  The downloads available with this tip include a csv file named ExhangeSymbols.csv.  You can use your preferred technique for parsing the download data columns and loading the results into a SQL Server table.  This tip references a SQL Server table named ExchangeSymbols that is populated from the file.  Within the context of this tip’s code, the table resides in the dbo schema of the for_csv_from_python database.

Here’s an excerpt of two sets of ten rows from SQL Server table for the downloaded symbols.  As of the time the download was performed, there were 8856 symbols tracked by eoddata across the three exchanges. 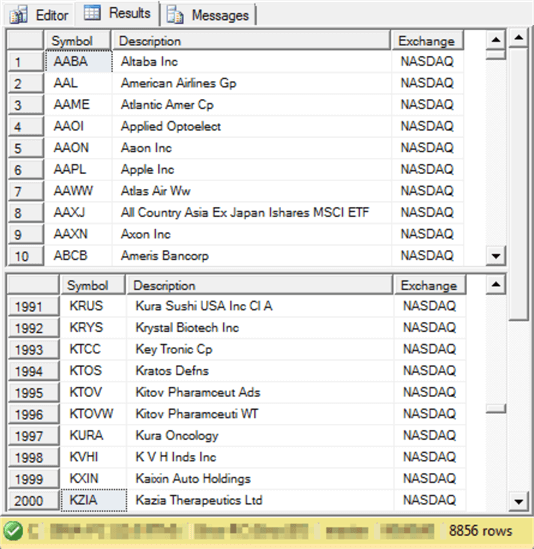 This section presents and describes a Python script for extracting historical price and volume data from Yahoo Finance for each of the three sets of symbols referenced in the previous section.  The enhancements in this tip relative to a prior tip are primarily to handle symbol mismatches between eoddata and Yahoo Finance and inappropriate data in one or more columns of time series data values.  This section also displays excerpts from the script output to clarify how the code interacts with its data sources.

The bullets below walk you through the script.

The next screen shot shows the log for the first thirteen symbols from the first set of symbols.  This log prints by default in an output window from the IDLE application that ships with Python 3. 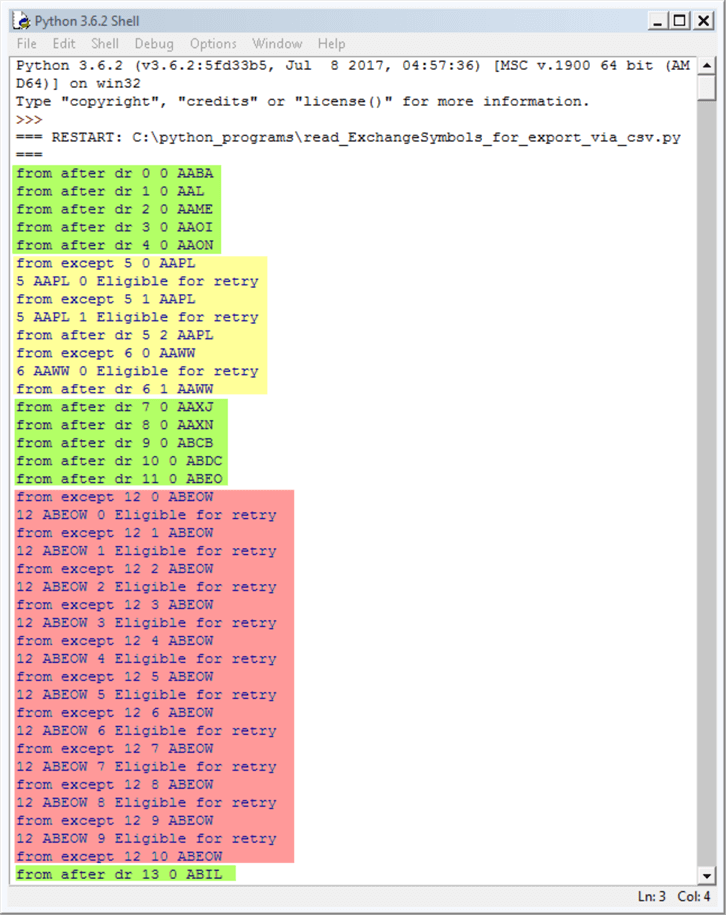 After the conclusion of a run for the preceding Python script for a set of symbols, the csv file was renamed manually.  The Python script was run for each of the three sets of symbols.

The next pair of screen shots shows from a Notepad++ session the first and last ten data rows for the csv file created by the preceding Python script for the first set of symbols. 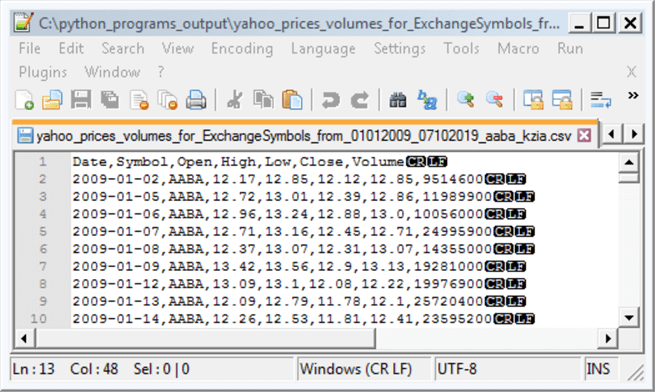 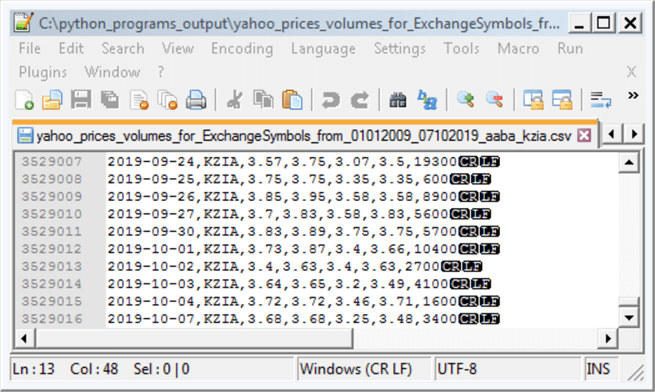 The csv files for the second and third sets of symbols follow the same layout as for the preceding two screen shots.

This section describes a two-step process for importing and transforming the csv files with price and volume data.

The T-SQL code for inputting the csv files for each of the three symbol sets appears below.

Future tips will drill down on the data in the yahoo_prices_volumes_for_MSSQLTips table within the for_csv_from_python database.  However, it may be helpful to present in this tip some queries for the table to give you a feel for what was downloaded from the Yahoo Finance and eoddata websites in this tip.  You will generally want to confirm a data load of millions of rows with some validation queries that confirm the data you inserted into SQL Server. 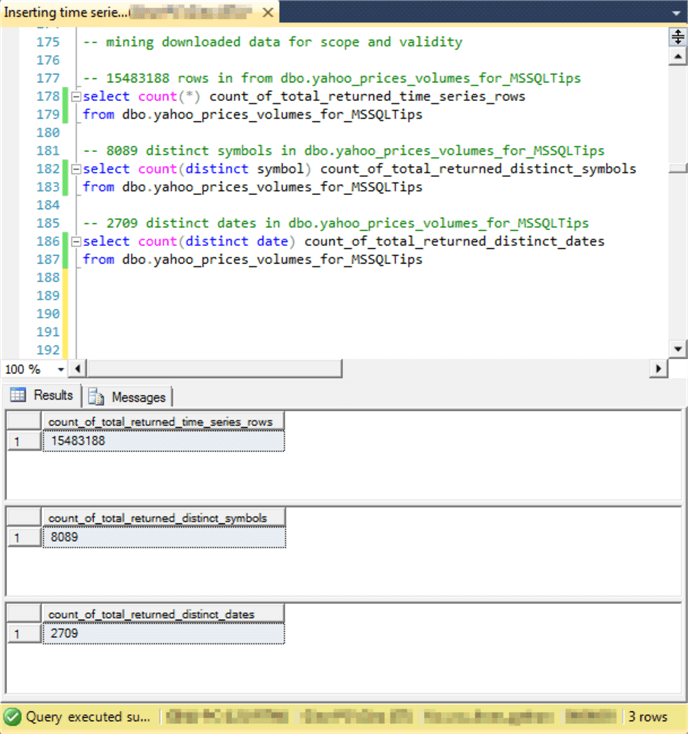 The following screen shot shows of an excerpt of the first 13 symbols in alphabetical order from the downloaded ExchangeSymbols table from the eoddata site.  As you can see, the table contains 8,856 symbols from three different exchanges (NYSE, AMEX, and NASDAQ). 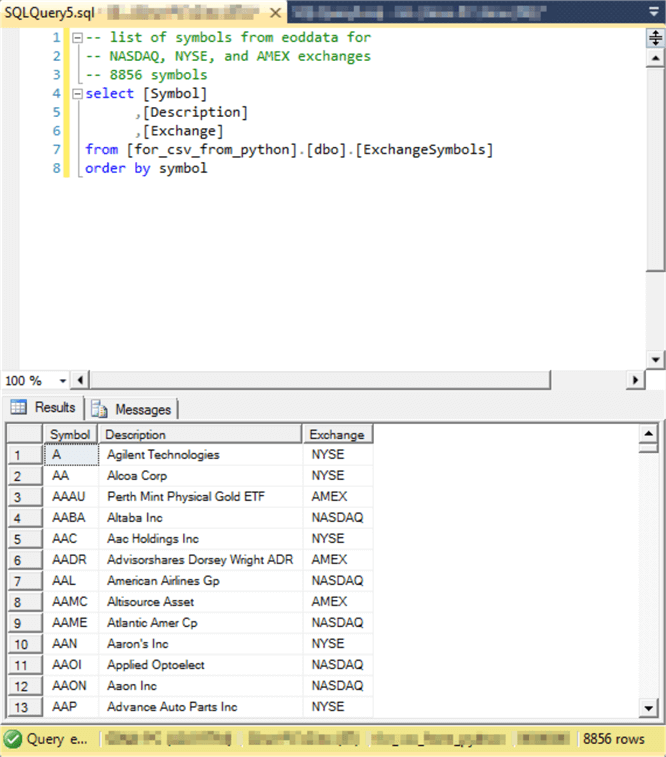 The next screen shot shows a query and an excerpt of the first thirteen rows from its results set.  This query returns the eoddata symbols (ExchangeSymbols) that are also in Yahoo Finance (yahoo_prices_volumes_for_MSSQLTips).  Notice that the total count of rows is 8,089; this value matches the result from the initial set of three queries with the title of count_of_total_returned_distinct_symbols. 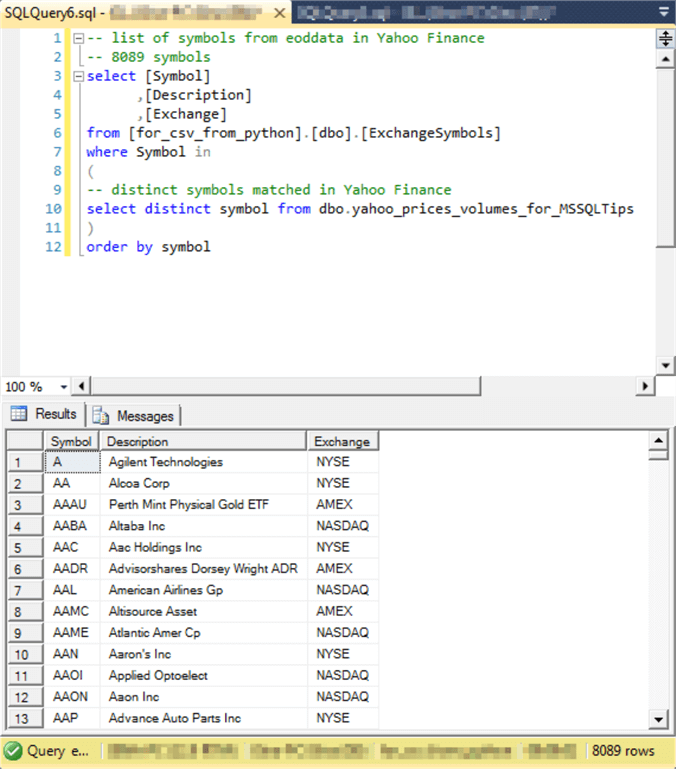 The last screen shot in this tip shows another query and an excerpt of the first thirteen rows from its results set.  This query returns the eoddata symbols that do not match any symbols in the Yahoo Finance web site interface for Python.  There are 767 total rows in the results set.  The sum of 767 rows from the following query and 8,089 rows from the preceding query matches the total number of symbols returned for the three exchanges from the eoddata web site as of the time this tip was prepared. 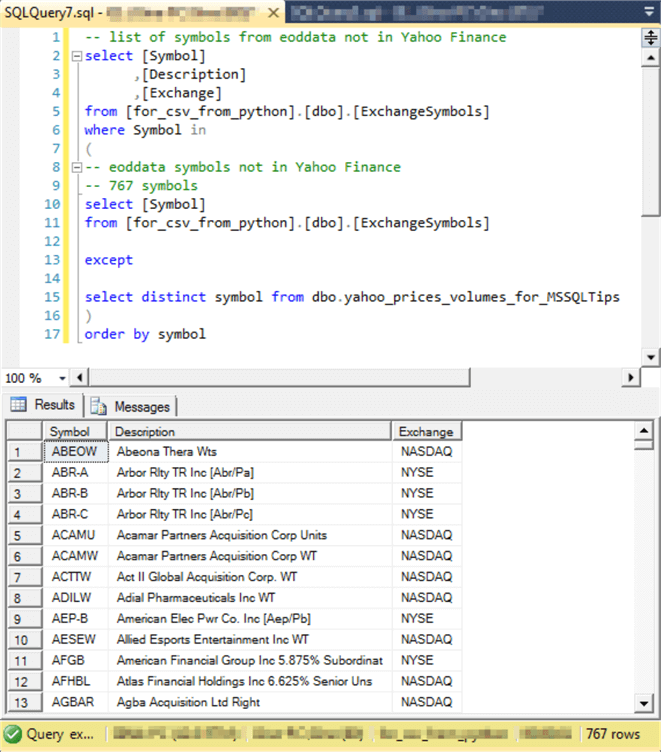 You can try out the code examples for this tip.  All the referenced scripts along with a csv file having all the symbols referenced from eoddata are available in this tip’s download file.