Please present some use case examples for when it is correct to code While and Goto loops in T-SQL with time series applications. I have often read that loops are a bad practice for T-SQL development. However, a growing percentage of my work is with time series data, and some time series analysis methods are iteratively based and cannot be resolved by a set-based approach.

Here is a good rule of thumb about when iterative development techniques are ok to use with T-SQL development: use iterative techniques only when a process cannot be implemented with set-based techniques. This tip uses the term iterative to denote a process that successively operates on the individual rows of a query results set or a table instead of sets of rows in the columns of a table or query results set. With time series data and technical analysis techniques, there are multiple solution frameworks that cannot be implemented with a set-based approach. This tip drills down on two use cases for iterative techniques that require loops for a successful implementation.

A technique is inherently iterative when the value for a current time period is based on one or more prior time periods. This goes beyond the simple running sum use case. While it is true that a running sum can be calculated with a sum window function, the data for the function in this use case is dependent on observed values for each prior period. However, what if an analysis method were dependent on antecedent computed values instead of the observed values, and what if the computed values for a prior period were, in turn, dependent on computed values from other prior periods. In this kind of use case, an iterative computational approach can be required. This is because the antecedent data for the computation of a value in the current period is not known until the antecedent computed values are computed from one or more prior periods. Computing exponential moving averages (emas) are a common example of this kind of use case.

Another time series example that calls for iterative techniques is when you need to discover the duration between pairs of events that are separated from each other by a varying number of periods. In this kind of use case, the start of an event needs to be based on its position relative to the end of a preceding time period. For example, an algorithm may need to search a set of values on two or more criteria, such as the end of a preceding event and the beginning of a new event. When analyzing buy-sell cycles over a set of dates, you can encounter situations like this.

The third equation in this section is the basic expression for an exponential moving average of period length l in period t (emal,t). This basic expression includes just two terms on the right-hand side of the equal sign.

The values of α extend from greater than 0 through less than or equal to 1, such that

The value of t is for the period number of the current period. When computing exponential moving averages for time series data, there must be at least three periods in the time series, but there are frequently many more time series values.

When working with financial data α is determined by the period length. For example, for a period length of 10,6 the expression for computing α is 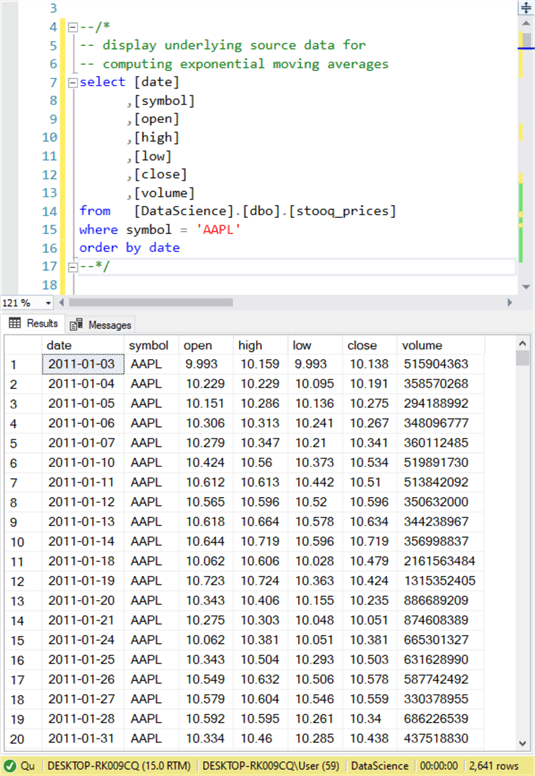 The image below shows all the trading dates in January 2011. There are just 20 dates in the trading calendar for January 2011 (see the row_number column). As you can see, some day numbers are missing. 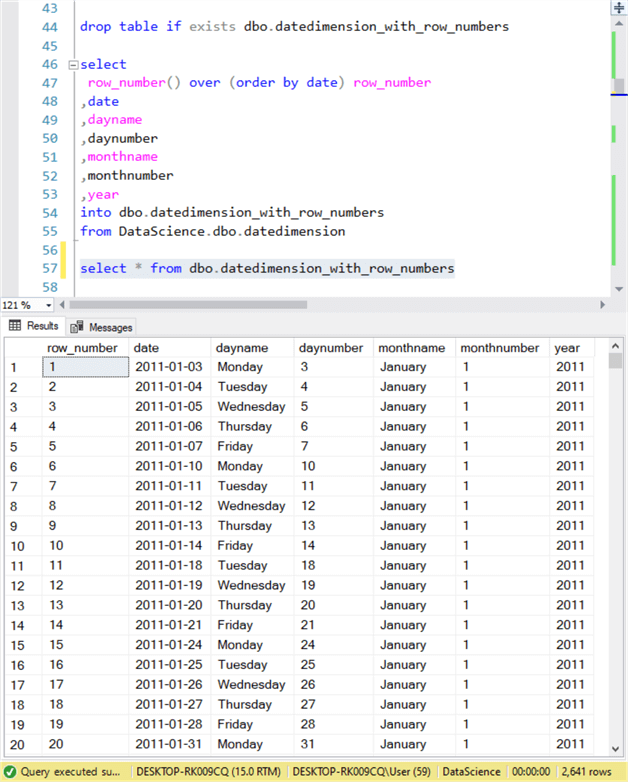 The following script is for creating a table (emas_for_stooq_prices) for holding exponential moving average values. The table has five columns: row_number, date, symbol, ema_10 and ema_20. The last two columns are, respectively, for holding exponential moving averages with period lengths of 10 and 20. You can designate a separate column for each ema that you require.

There is one remaining table used in the process for computing exponential moving averages. This table named table_of_symbols tracks all the symbols in stooq_prices table of underlying time series values. Recall that ticker symbols partly identify a set of time series values. The table_of_symbols table contains a separate row for each distinct ticker symbol in the stooq_prices table. On each row, there is symbol_number identifier value and a string value for the symbol.

The following code excerpt illustrates an approach to creating a fresh copy of the table_of_symbols table with a row for each distinct ticker symbol in stooq_prices. The drop table if exists statement removes a prior table version if one already exists in the dbo schema of the default database. A nested pair of select statements pulls distinct symbols from stooq_prices in its inner query. The outer query uses the T-SQL row_number() function to assign a numeric identifier (symbol_number) for each distinct symbol. The into clause populates the table_of_symbols table with the results set from the outer query.

The code for computing the exponential moving averages relies on two nested while loops.

Before starting the while loops, the code for computing exponential moving averages declares a set of local variables and populates some of them for use on the first and/or all passes through the loops.

The code for the while loops appears next.

Here is a screen shot with the first and last ten rows from the emas_for_stooq_prices table from the preceding script excerpt. 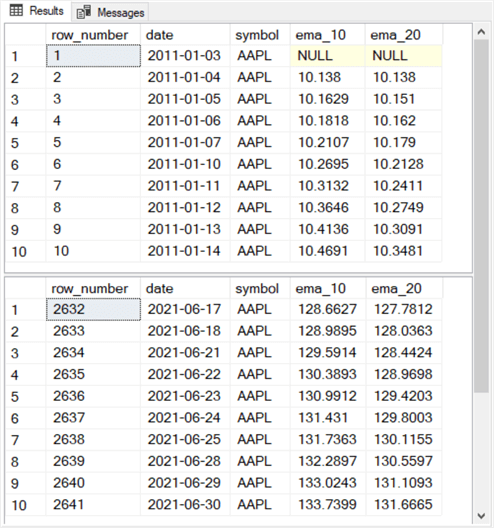 Based on these two relationships, you can detect reversals between two contiguous periods in the underlying time series values. If you are able to buy a financial security shortly after it reverses from a falling to a rising trend, then you may be able to sell the security shortly after it reverses again from a rising trend to a falling trend. This section introduces some T-SQL code that allows you to compute profitability of this reversal detection strategy with historical data.

The full query statement that includes the preceding excerpt appears is in this prior tip Assessing Time Series Model Performance with T-SQL. The full query statement writes a log of rows with the computed buy_sell_signal and buy_sell_price column values. Each log contains multiple buy-sell cycles that depend on the criteria, such as those appearing in the preceding excerpt. Each buy-sell cycle starts with the row after a buy signal and continues through the first row after the next sell signal. 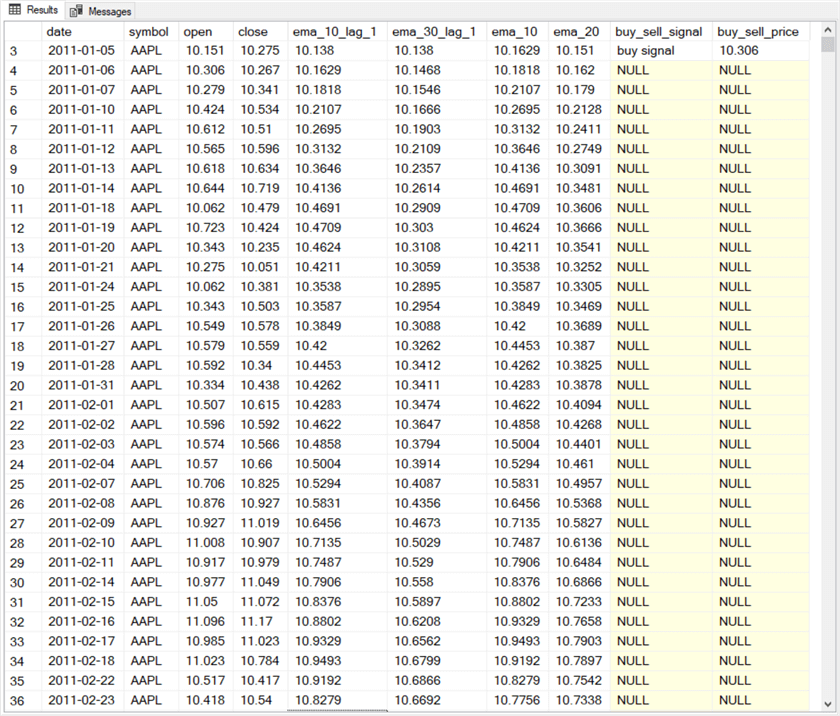 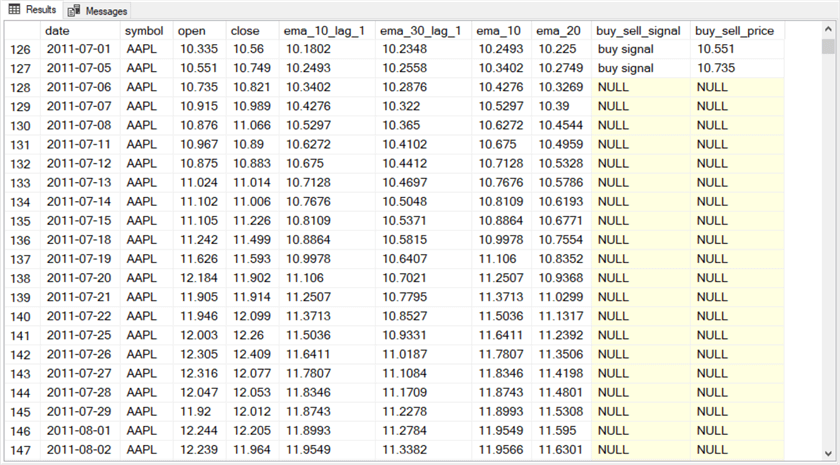 As the preceding screen shots show, it is easy to have buy signal and sell signal rows in time series data that do not necessarily recommend any action from a model. Code for compiling start and end dates for buy-sell cycles from a log table needs to distinguish between buy signal and sell signal rows that recommend an action from those that do not. The following script demonstrates how to use a goto statement inside an if…else statement to navigate through a log table and extract the start and end dates for a series of buy-sell cycles. This kind of action is required as a first step to compute the gain or loss associated for each buy-sell cycle.

The log table from the preceding section has a row for each date from the first date through the last date in a test dataset for evaluating a model that recommends when to buy and sell securities for a ticker symbol. This tip uses a test dataset that has its first trading date at the beginning of January in 2011 and runs through June 30, 2021. The dataset also has a separate set of log rows for each of six ticker symbols: AAPL, GOOGL, MSFT, SPXL, TQQQ, UDOW.

The following code excerpt declares the local variables and extracts the subset of log rows for a designated ticker symbol. The excerpt starts with the a declare statement for seven local variables.

The second part of the excerpt below performs a subset from the log table (log_for_buy_at_ema_10_gt_20) for the rows belonging to the current @symbol value; the subset table is assigned the name symbol_temp_log. Additionally, the second part adds a new set of column values to the subset table that are not in the full log. The new column has the name next_date. The value for this column is the date column value of the next row in the log table.

This tip illustrates two appropriate use cases for iterative development techniques with time series data. Some time series requirements call for computing or extracting current values based on antecedents. You can recognize these use cases and other use cases as appropriate for iterative development techniques because you are computing or compiling new row values that cannot be known until after prior row values become computed or compiled.

Because SQL Server applications typically rely on observations instead of computed or compiled values from prior rows, set-based approaches are almost always the best way to perform data manipulations. However, with some time series applications, that is not necessarily the case. After iterative techniques are used to compute or compile a set of time series values, then set-based approaches can be appropriate for referencing the values derived by iterative techniques.

For those who want to try some of the programming techniques discussed in this tip, there are four files in the tip’s download.