I seek an example of how to implement a securities trading model based on MACD indicators. I want the example to readily work with any securities symbol without doing anything other than specifying a new symbol. I also want the demonstration to provide feedback on the amount of return and rate of return from the model for different securities symbols.

MSSQLTips.com published a couple of prior tips (here and here) for SQL Server professionals that introduced and applied MACD indicators. Both prior tips illustrate how to compute the MACD indicators and correlate indicator values with close price changes. However, neither of the prior tips presents a model for when to buy and sell securities. While it is important for security indicators to be correlated with current and future securities close prices, correlations do not directly indicate when to buy and sell securities – nor do they confirm the amount gained or lost as a result of buying and selling a security. Yet whether you are trading securities for yourself, or you are working for or consulting to a trading organization, it is possible that securities will be bought and sold on a regular basis.

This tip demonstrates how to build a model for buying and selling securities based on two of the three MACD indicators. This tip also presents summary results from the model for six different symbols. Unlike an earlier time series modeling tip, this tip completes all model and evaluation steps in a single T-SQL script instead of restricting SQL Server to just storing the data and implementing the model, but performing an evaluation of the model results in Excel. With the script from this tip, all a user has to do is specify a security, designate a starting date for trades, run the script, and then save the summary report for the model with the security symbol.

A refresher for the MACD indicators

MSSQLTips.com published numerous tips on how to compute and use exponential moving averages (for example, here and here). Exponential moving averages (EMA) are most often computed in a loop. The loop goes back to the second value in a time series where the second value is initialized to the first value in the underlying time series – namely, the close price for sequential trading days. This tip illustrates how to use a while loop for computing an exponentially weighted moving average (ewma). Within this tip, the period lengths for the MACD indicator are 12 and 26. The expression for what is commonly called the MACD indicator is

The third indicator is usually called the MACD histogram. The indicator's value is computed as the MACD indicator less the signal indicator. This tip does not use the MACD histogram indicator, but it is included in the demonstration code so that others who require it can have some code for computing it.

The MACD indicators are for assessing the momentum of the underlying series, such as daily close prices.

Computing the MACD indicators with T-SQL

There are two parts to the T-SQL code for computing the MACD indicators.

The first part computes ewma_12 and ewma_26 based on the daily close prices of a security. Results are saved in the #temp_for_ewma temp table. Each security is represented by a ticker symbol. This tip section shows the code for the TQQQ ticker symbol. However, the tip reports results for six ticker symbols – namely, TQQQ and five other securities with ticker symbols of AAPL, GOOGL, MSFT, SPXL, and UDOW. The string value of TQQQ is assigned to the @symbol local variable in the script below. By changing assignment value, such as to AAPL, you can exponentially smooth the ticker whose data is processed.

In the second part, the exponential moving averages are used either directly or indirectly to compute the three MACD indicators. Three columns are added to and populated in the #temp_for_ewma table – one column for each of the MACD indicators.

The T-SQL for the first part

The first part initializes several columns for the #temp_for_ewma temp table. The columns include date, open, and close prices for successive trading dates from the stooq_prices table in the DataScience database. Another key column has the name row_number, which is populated by the SQL Server row number () function. A while loop in the first part computes ewma_12 and ewma_26 column values.

Here is a results set excerpt showing the first five rows from the commented select statement at the end of the preceding script excerpt.

The T-SQL for the second part

The second part of the T-SQL code for computing the three MACD indicators appears in the following script excerpt. There is a separate sub-part for each of the three indicators. The first line of code for each sub-part starts with an alter table statement for the #temp_for_ewma table. This first line of code within each sub-part adds a new column to the #temp_for_ewma table. The column names in the first, second, and third sub-parts have these names, respectively

The third sub-part begins by adding a third column named macd_histogram to the #temp_for_ewma table. The code for populating the macd_histogram column computes successive rows as the macd column value less the signal column value.

Here is a results set excerpt that shows the first five rows from the commented select statement at the end of the preceding script excerpt.

The MACD trade model focuses on two ways that a security can show increasing positive momentum.

Here is the code for creating and populating a table (#for_macd_trade_model) with MACD indicators, their underlying values for the indicators, one additional column for specifying buy and sell prices, and two additional columns of values that denote the beginning of major cycles, the beginning of minor cycles as well as the ends of periods of increasing positive momentum.

Two new columns in the #for_macd_trade_model table are computed with case statements.

There is one additional data source for the MACD trade model. This source data is from the #first_buy_date_and_last_date_for_positive_macd_runs table. The T-SQL code for creating and populating this table is in this tip's download. The results set from the table for the TQQQ symbol contains just three columns of data for 9 rows for the sample data reported on in this tip.

The source data for the model in this tip depends on trading data from the first trading date in 2019 through the last trading date on or before June 30, 2021. Over this range of trading dates, there are 9 major cycles for the TQQQ ticker symbol. The following screen shows the results set displaying the 9 rows for the three columns of data. 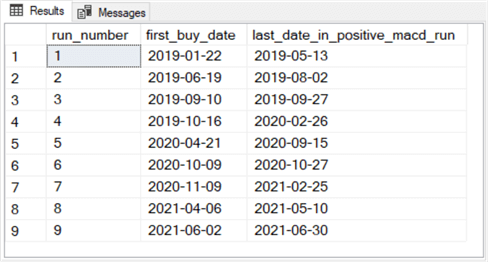 The contents of the #for_macd_trade_model table and the #first_buy_date_and_last_date_for_positive_macd_runs table can be processed to create and populate a new table with just buy and sell rows that follow the rules of the MACD trade model. The T-SQL code that implements the processing concatenates three results sets

Here is an excerpt from the top twenty rows of the #buy_price_sell_price table. Each buy_sell cycle is represented by two rows. 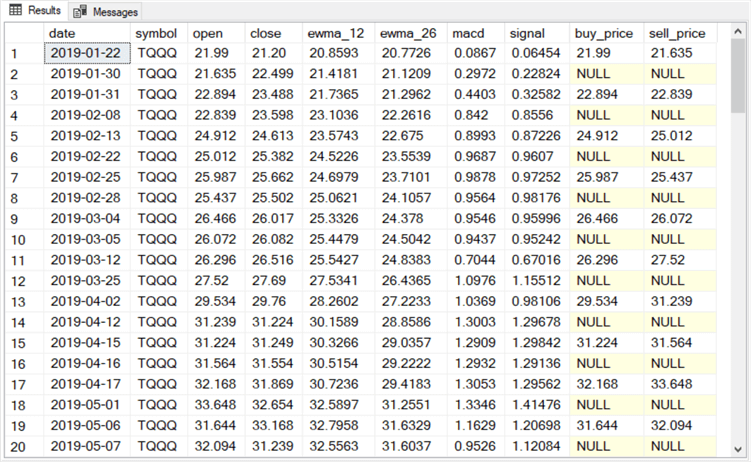 Reports for ticker symbols from the MACD trade model

The goal of this section is to reveal the performance of the MACD trade model for the six ticker symbols evaluated in this tip. Naturally, there is a bit of data manipulation to generate even the simple reports shown in this section. In the interest of keeping the focus on the model, this code is not discussed in the tip, but it is available for your review from the tip's download.

The following table includes a single column with six rows – one for each of the six ticker symbols evaluated with MACD trade model. The script for this tip extends over 500 lines. The last hundred lines or so are devoted to reporting results for a ticker symbol. At the top of the script for the model (see the screen shot below), there is a declare statement for assigning a ticker symbol to the @symbol local variable. By changing this assignment statement between successive runs of the script, you can generate a report for each of the six ticker symbols that reveals model performance. The following screen shot shows a script excerpt with UDOW assigned to the @symbol local variable. By examining the table below, you can tell that UDOW is the last ticker symbol used when running the script.

Within each table row are three types of information

The preceding table shows that all six ticker symbols had a final cumulative trade balance that was greater than the initial balance of $1000. If these results were typical for any ticker symbol, then the results confirm the model can accumulate wealth over a series of trades for any ticker. While these six ticker symbols are not necessarily representative for any ticker, they include three tickers for widely traded companies (AAPL, GOOGL, and MSFT) as well as three broad index exchange traded funds (SPXL, TQQQ, and UDOW). The overall rate of change of the final cumulative account balance relative to the initial account balance ranged from 48 percent gain for TQQQ down to 10 percent gain for MSFT.

The MACD indicator and signal indicators can be combined in a model to find winning trades that cause account balances to grow over a period of two and a half years. The T-SQL code illustrates how to design such a model. To get a hands-on feel for how the model works try the script for this tip with the sample open-high-low-close-volume data in the download for this article.

Note: this article is meant to illustrate analytical modeling techniques for securities over time. The tip does not endorse any technique nor ticker symbol.