A quick review of MACD indicators

Picking and packaging stock symbols for this tip

This tip works with data from the AllNasdaqTickerPricesfrom2014into2017 database, which was initially created in a prior tip and enhanced to include MACD indicator values in another prior tip. The Next Steps section describes how to get a backup copy of the database and a script to add all three MACD indicators to the database.

The following screen shot shows an Object Explorer view of the macd_indicators table in the AllNasdaqTickerPricesfrom2014into2017 database. As you can see, the table contains a column for each of the three MACD indicators (macd, signal, and macd_histogram). Additionally, there is a column of close values in the table as well. The values in each row are uniquely identified by their symbol and date column values.

There are 3266 distinct stock symbols in the database, but only a fraction of these symbols is well suited for use in this tip. The primary filtering objective is to find investment grade stocks with substantial amounts of historical data. The following four criteria discovers a total of 245 stocks that meet all primary filtering objective criteria from within the AllNasdaqTickerPricesfrom2014into2017 database. The result set is ordered by the difference between the maximum and minimum close prices for historical close prices within each symbol, and each symbol is assigned a row number. This facilitates the selection of two relatively matched sets of stock symbols based on odd or even row number values.

The criteria for investment grade securities that are also good for testing purposes are briefly described below.

The following script draws the sample of 245 investment grade stock symbols with substantial historical data in the AllNasdaqTickerPricesfrom2014into2017 database. Notice that each row is assigned a row_number value and that row_number values are based on the difference of the maximum close price less the minimum close price. The ordered stock symbols with associated filtering data are saved in the ##symbol global temporary table. Two queries at the end of the following script show how to specify a sample of the top ten symbols with either odd or even valued row numbers. These two sets of symbols are comparable in terms of the filtering criteria.

If you run the script, you will discover a symbol value of PCLN. This symbol is for a company named PriceLine.com at the time that the sample was drawn from the NASDAQ exchange website (nasdaq.com). Shortly after the sample was drawn, the company changed its name to Bookings Holding with a symbol value of BKNG. I have two reasons for pointing this out. First, the PCLN symbol is no longer listed on the NASDAQ stock exchange; the company is now represented by the BKNG symbol. Second, you should understand that historical stock data is constantly evolving as circumstances change. This real-world feature is one reason historical price and volume data represents such a good source for demonstrating database development techniques.

Identifying start and end dates for MACD up cycles

This tip focuses on how the three MACD indicators can point to trading dates that are better on average than other trading dates for owning or not owning a stock. This tip designates the start date for an MACD up cycle as the first trading date where the MACD value moves from below zero to above zero. The hold duration for a stock is arbitrarily specified as twenty days from the buy date. This relatively short hold period is long enough to capture many close price changes for each stock over the four-year time span for which historical stock prices and MACD indicators are available in the AllNasdaqTickerPricesfrom2014into2017 database. In fact, this relatively short hold period probably understates the magnitude of the gain in MACD up cycles because larger price gains are associated with longer MACD up cycles. This understatement is not important because the goal of this tip is to highlight how each of the three MACD indicators impact stock price movement in the twenty days after the MACD crosses from below to above its centerline value.

The following screen shot displays an excerpt from the output of the preceding select statement. There are two sets of rows in the output - one for the NVDA symbol and another for the OLED symbol; both symbols represent technology hardware manufacturing companies. 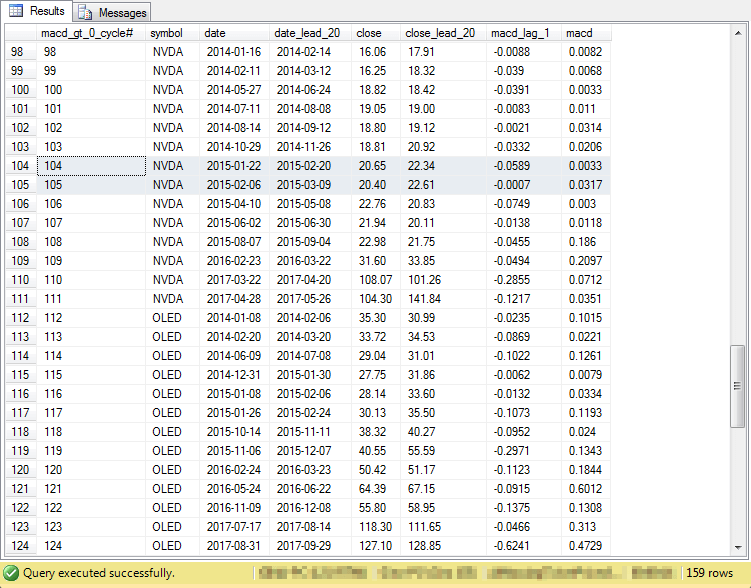 The following script illustrates the basics for how to join macd_indicators table rows with ##macd_gt_0_cycles table rows. Notice that the inner join between the two tables matches rows on three criteria. This code sample is not actually used in the solution, but it is a basis for more complex code that is used in the solution to accomplish the join and perform other functions as well.

The following screen shot shows an excerpt from the preceding select statement. 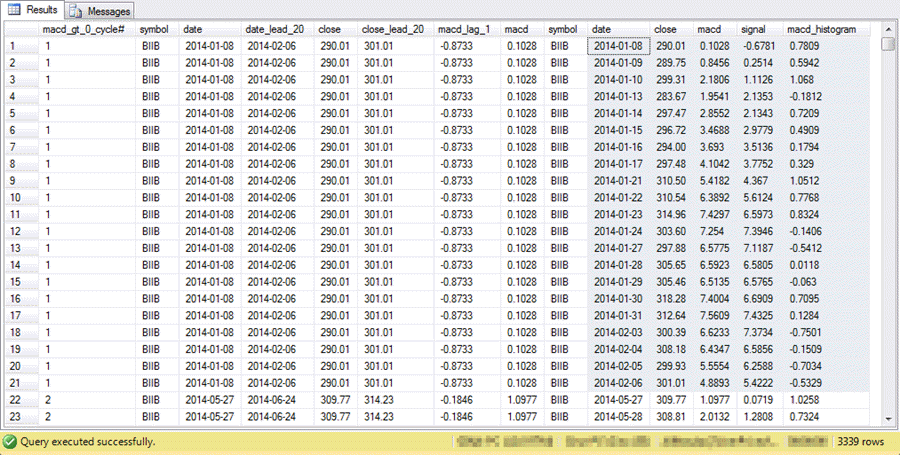 The next script builds on the demonstration code in the preceding script.

There are two main types of accounting fields based on macd indicator values.

The preceding script to populate the ##macd_gt_0_for_accounting table has so many columns that they are not easily viewed in a single screen shot. Furthermore, there are natural groupings to the columns in the table. Therefore, the following four screen shots each display a subset of the columns for the first twenty-five rows in the table. As you can see from the border in each of the screen shots, there are total of 3,339 rows in the overall table. I often use a quantity such as this for unit testing my code. 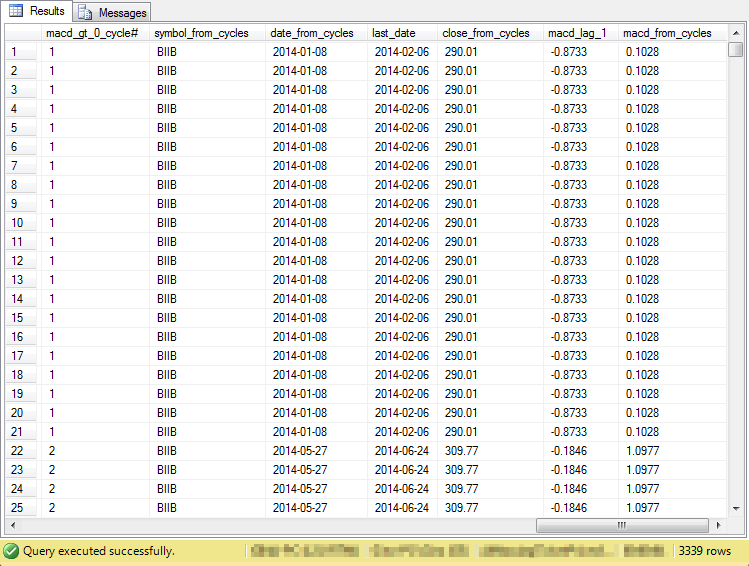 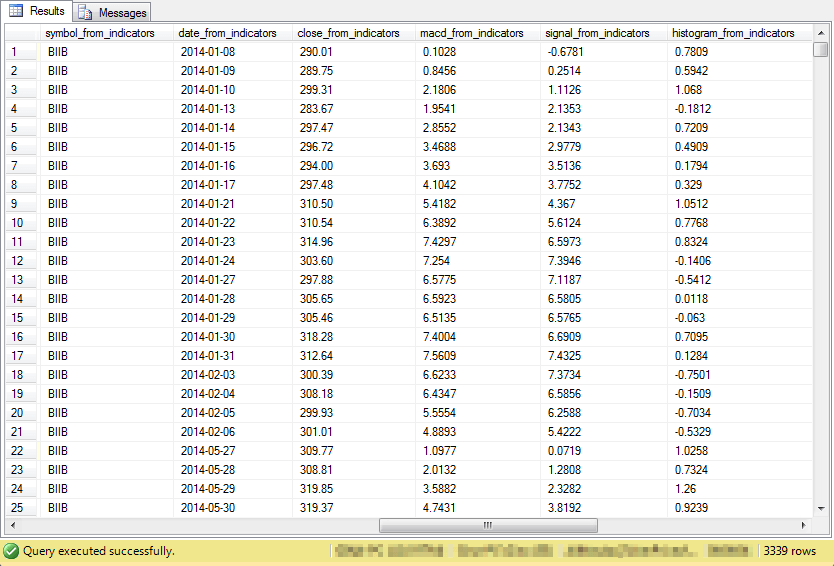 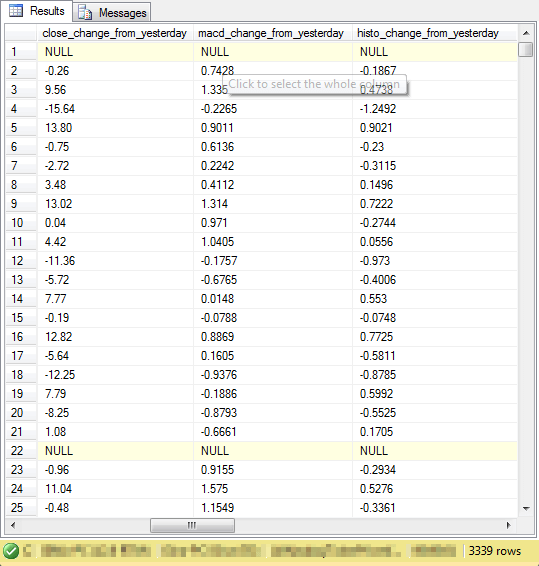 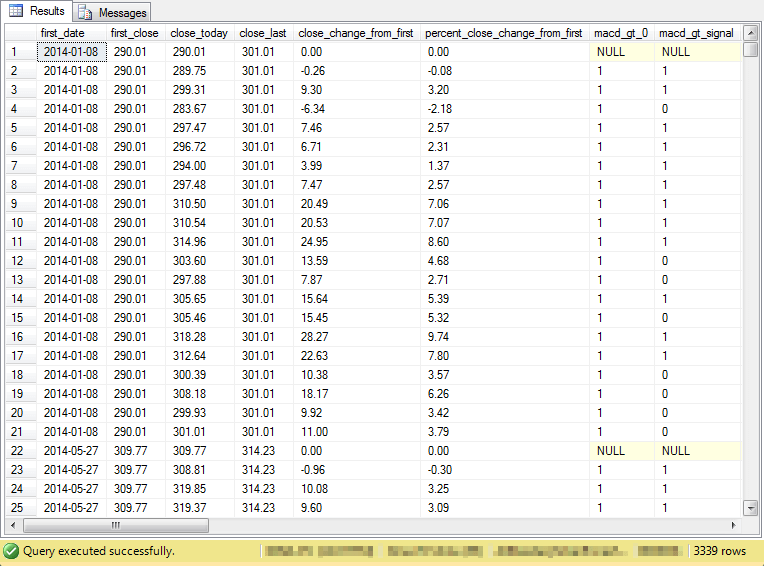 The combination of macd_gt_0 and macd_gt_signal field values can identify four times during which it may be beneficial to own or not own a stock. See below category names for four times based on these field values.

In the twenty-trading trading days after the beginning of potential up cycles based on the MACD switching from below its centerline to above its centerline, the MACD can

In each of these twenty trading days, the MACD value can be above or below the Signal value. Recall also that some twenty-day cycles end after the next twenty-day cycle starts. Therefore, it is possible for some days to belong to more than one up cycle.

The following script computes the average percent change in close price from the beginning of a cycle and the frequency of trading days by macd_gt_0 and macd_gt_signal values.

See below a screen shot of the query's result set in the Results tab. Notice the results are implicitly ordered by their macd_gt_0 and macd_gt_signal values because of the group by clause and actual values of the two category fields. The order of rows in the result does not match the ownership timeline, but each timeline point links to one pair of macd_gt_0 and macd_gt_signal values. 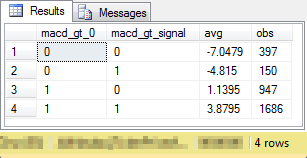 The next screen shot shows the results after copying raw output to Excel. Additionally, there is some minor processing of the copied results. These results are based on trading days for symbols with odd row numbers.

The next screen shot shows the same kind of results tabulated for symbols with an even row number. Although the tabulated outcomes are not identical for those based on trading days from the odd symbol set, the general pattern of key relationships is the same.

Linear regression analysis for estimating change in close from yesterday

This section demonstrates how to reference the two stored procedures from the prior tip with three columns of data from the ##macd_gt_0_for_accounting table.

Here's the script for implementing the first regression line fit.

Here's the output from the preceding script. As you can see, the compute_slope_intercept_correlation_coefficient stored procedure returns a result set with a single row of values.

To compute the line of best fit and coefficient of determination for close_change_from_yesterday field values versus macd_change_from_yesterday field values all you need to do is modify the line for specifying x values in the preceding script. For example, make the following swap. The macd_accounting_for_odd_symbols.sql script file that is available for download with this tip has the complete version for both pairs of x and y values so that you can verify the outcomes without any swapping of lines.

Cross validation of linear regressions for odd versus even symbols

One way to answer these questions is to use the model based on odd symbols to predict y values for the data with even symbols. In like manner, you can use the model based on even symbols to predict y values for data with odd symbols. This is an example of cross validation in that each model is tested with the data for the other sample of symbols. You are validating the models across different data sets. This is why we call it cross validation.

The following script demonstrates cross validation of the model developed based on the data for even symbols with the data for odd symbols.

The next screen shot displays selected output from the preceding script. 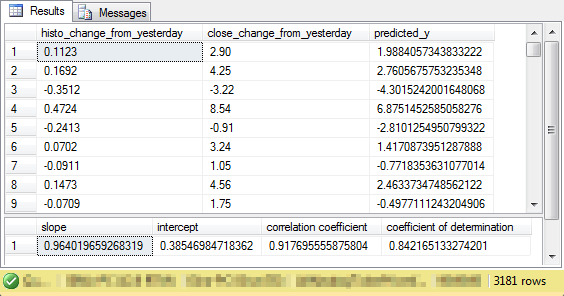 The next screen shot shows the output for estimating predicted close_change_from_yesterday values for the even symbol sample based on a prediction model using slope and intercept derived from using data for the odd symbol sample. For your easy reference, the macd_accounting_for_even_symbols.sql file, which is available as one of the files with this tip, has the full script for generating the results shown below.

From a prediction perspective, the most important value may be the one for the coefficient of determination. Notice that the value is slightly more than .88. Recall that a coefficient of determination of .88 was also calculated for the model of close_change_from_yesterday values versus histo_change_from_yesterday for the even symbol sample. Therefore, whether we use the model from the odd sample or the model from the even sample, we get the same eighty-eight percent of the variance explained in the even sample.

Based on these results, two conclusions are supported. 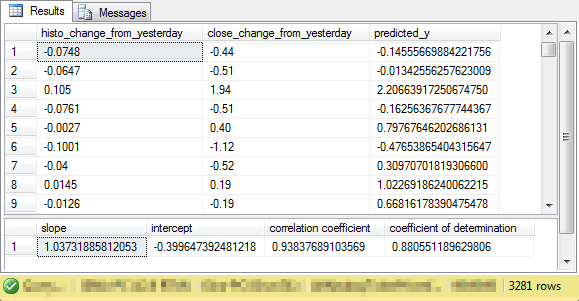 There are four steps necessary for trying out the scripts from this tip.