Candlestick and Heikin Ashi Charts from Yahoo Finance and Stooq.com

We have covered many different aspects of analyzing stock data in various MSSQLTips articles, but one thing that is extremely helpful when working with data is to use charts effectively. In this article we will look at how to create charts for price time series data from both Yahoo Finance and Stooq.com. More particularly, we will look at candlestick and Heikin Ashi charts.

It is sometimes said that a picture is worth a thousand words. The same general thought applies to chart images and the numerical values that they display. One chart can convey more insight than all the numbers in it.

A prior MSSQLTips.com article, Migrating Time Series Data to SQL Server from Yahoo Finance and Stooq.com, demonstrates how to download to SQL Server financial security price and volume time series data from Yahoo Finance and Stooq.com. Analysts may want to graphically preview the data on Yahoo Finance or Stooq.com before downloading them into SQL Server. Additionally, database professionals may have a requirement from end-users to capture selected chart images along with price time series data that are downloaded for ticker symbols. This tip equips you to start achieving either of these goals with candlestick or Heikin Ashi charts.

What is a candlestick chart?

A candlestick chart includes a candle for each date in a range of trading dates. Each candle depicts open, high, low, and close prices for a trading date.

There are two basic kinds of candle images.

When the open price is less than the close price, the candle can appear as below. This is for a candle with a rising price over the timeframe for the candle, which is often a trading day, but can also be one minute, one hour, one week, etc.

When the open price is greater than the close price, the candle can appear as below. This is for a candle with a declining price over the timeframe for the candle.

The following screen shot denotes a basic candlestick chart generated with Yahoo Finance for the MSFT ticker symbol running from October 28, 2021 through February 10, 2022. The horizontal time scale in a candlestick chart only has markers for dates during which the market is open. Therefore, the chart below does not have a marker for either October 30 and 31 in 2021 because these are weekend dates and markets are closed on weekends. 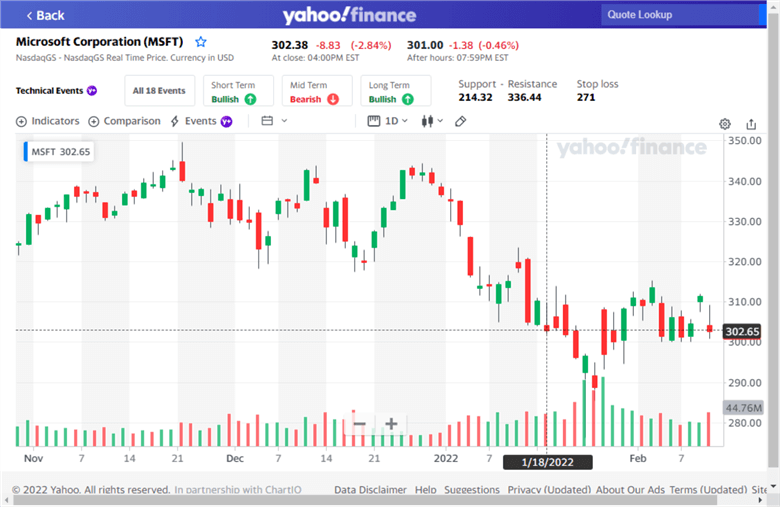 How to create a candlestick chart

After you configure a chart with either Yahoo Finance or Stooq.com, you can save the chart by simply performing a screen capture. It is likely that you may not want the whole screen for a chart as it may contain ads that are sponsoring the web site or menu items that are no longer needed after you have configured a chart. This tip used the greenshot application for capturing screens, editing them, and cropping them to display just the key portion of a chart window. You can download a free copy of greenshot from this web page. The greenshot application along with many other screen capture applications allows you to save edited and cropped screen images. 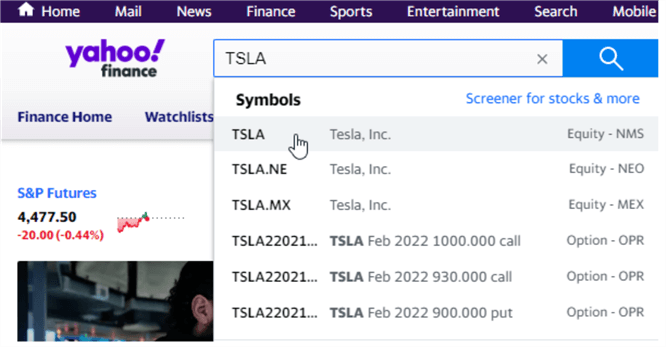 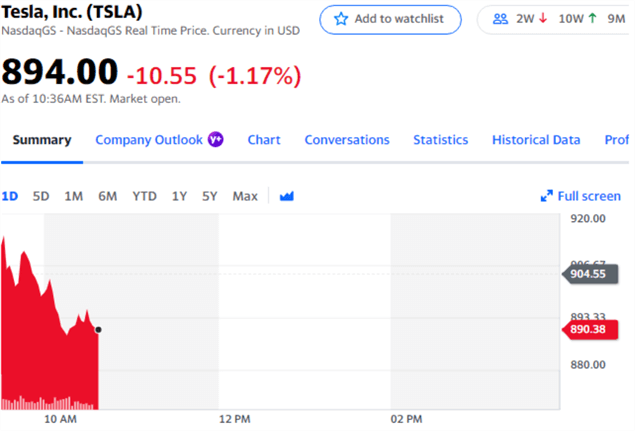 After you enter a Full screen view of the TSLA chart, select Candle from the chart type selector. The following screen image shows the selection of Candle for a candlestick chart. 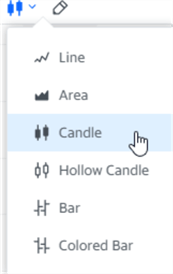 When the candlestick chart opens, it shows the most recent set of candles. If you want to preserve these candles, then you can take a screen shot and save it. Alternatively, you can drag the chart image to a prior set of candles that you want to view and or share with others. For example, the following image was taken on February 11, 2022, but the chart image was dragged to a prior timeframe than the most recent candles. The candles in the screen image below start in late September and run through early December in 2021. You can drag the chart window to a prior set of dates before the most recent dates by holding down the left mouse near the left chart border and dragging it to the right.

The candles in the following chart image were selected to illustrate the big white candle pattern. This is an oversized white candle; recall that white and green denote the same type of candle in candlestick charts. The big white candle pattern typically initiates a sequence of increasing prices for a ticker symbol. There is a red box that extends from a big green candle upward toward the end of a progression of candles that indicate generally increasing prices. Designating the end of a progression of candles can be subjective. 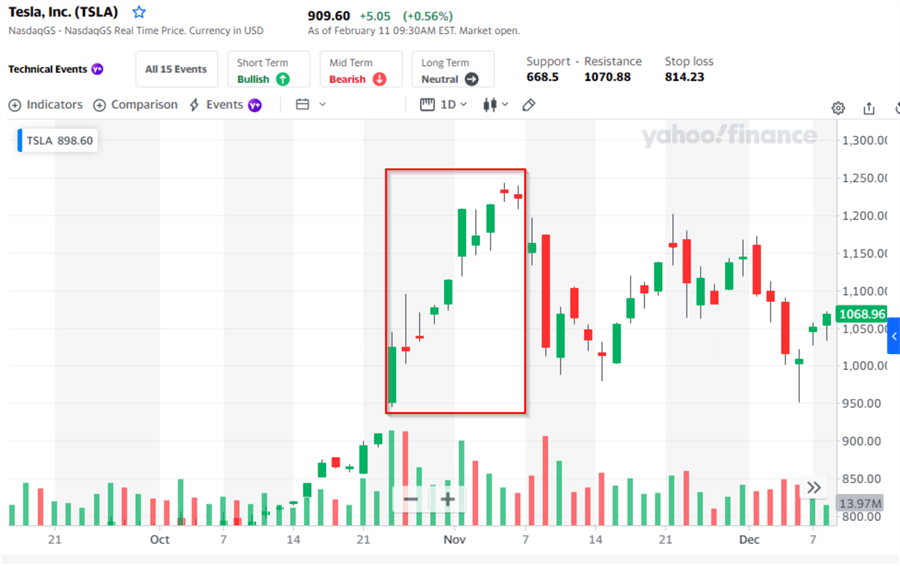 Here’s another example of a candlestick chart from Yahoo Finance for the TSLA ticker. The red box denotes the start of the candlestick pattern and the progression of candles that follow it in a trade. 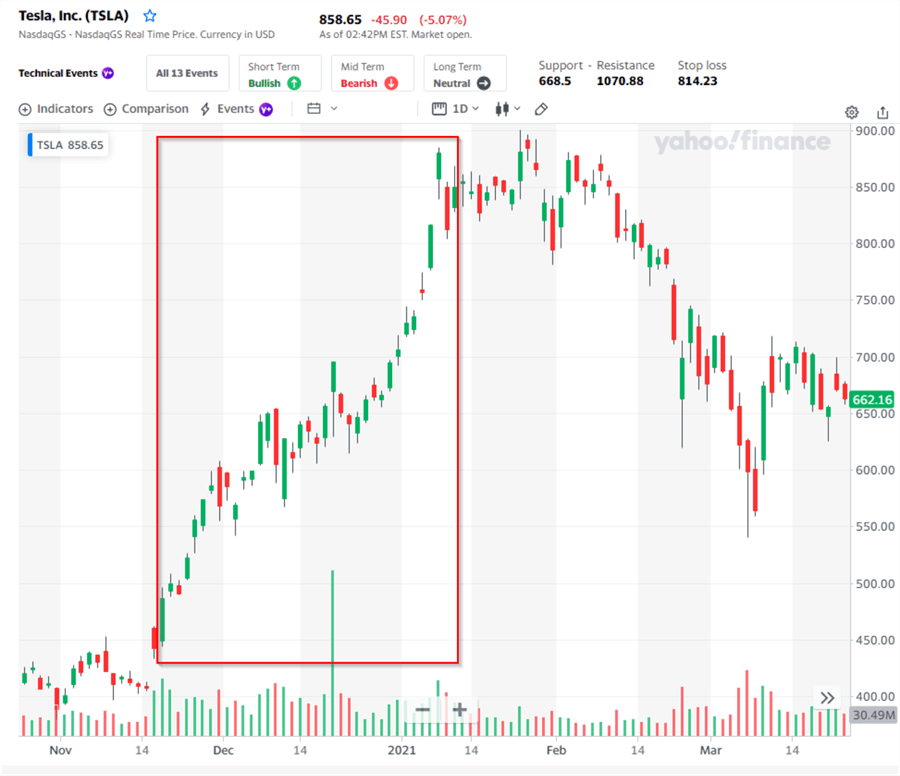 A third example of a candlestick chart from Yahoo Finance illustrates the three white soldier pattern for the MARA ticker symbol. MARA is the ticker symbol for a bitcoin mining company named Marathon Digital Holding, Inc. 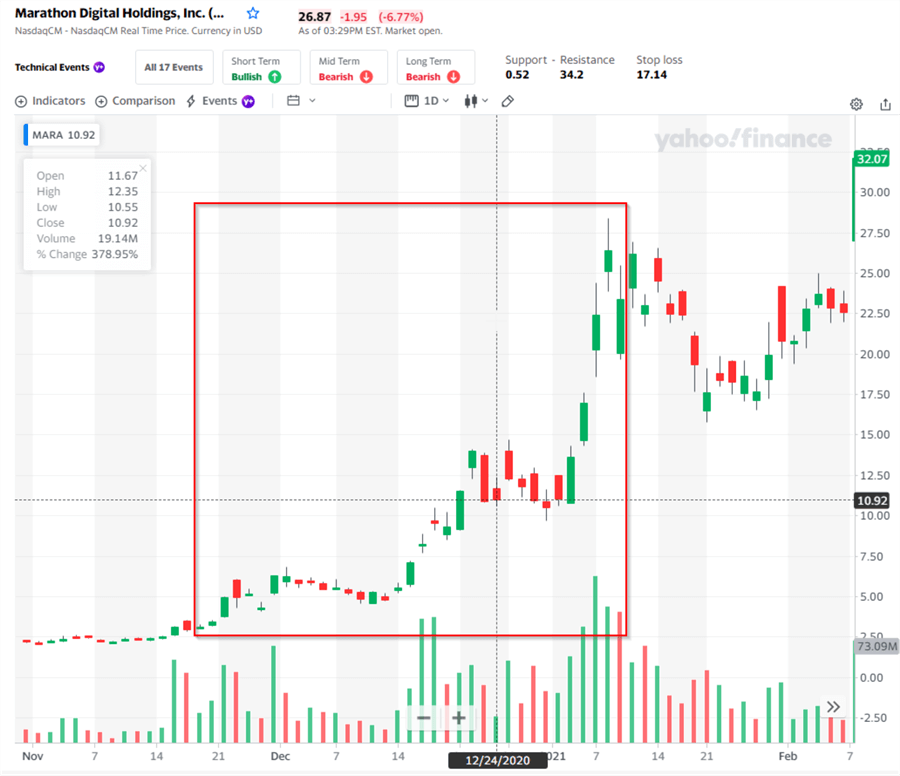 After clicking the ticker symbol from the drop-down menu, a standard chart window displays with a menu of options to the left. From the menu on the left, choose Chart HTML 5.

Once you enter the Chart HTML 5 view of the chart, click the X in the VOLUME & OPENINT panel to remove the panel and allow more space to display the candlestick chart of the open, high, low, and close prices. The following screen shot shows the cursor in position to make this selection. 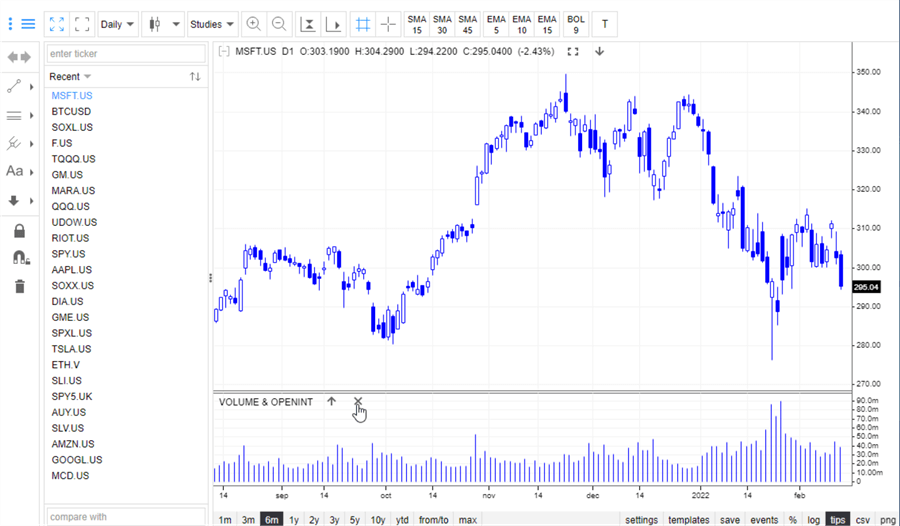 At this point, you can click the chart type selector. This allows you to view, the full selection of chart types available. The following screen shot shows Candle selected for a candlestick chart. In this tip’s next section, we will show charts with the Heikin Ashi chart type selected. 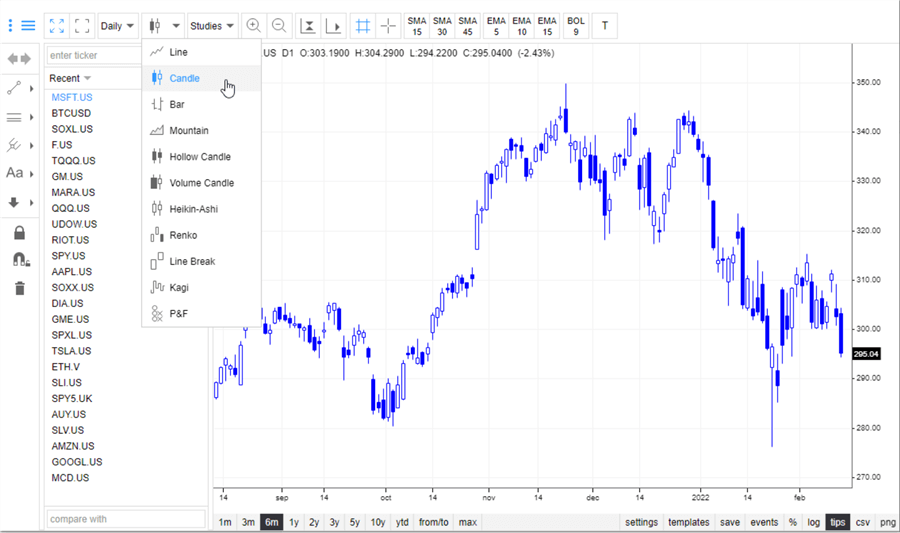 Just as with Yahoo Finance, Stooq.com initially shows the most recent dates. If that’s what you want to view, you are ready to start examining the candlestick chart. Alternatively, you can drag the chart image from left to right as many times as necessary to show candles for an earlier range of dates.

You can also use the wheel on your mouse to change the range of dates for which candles appear. 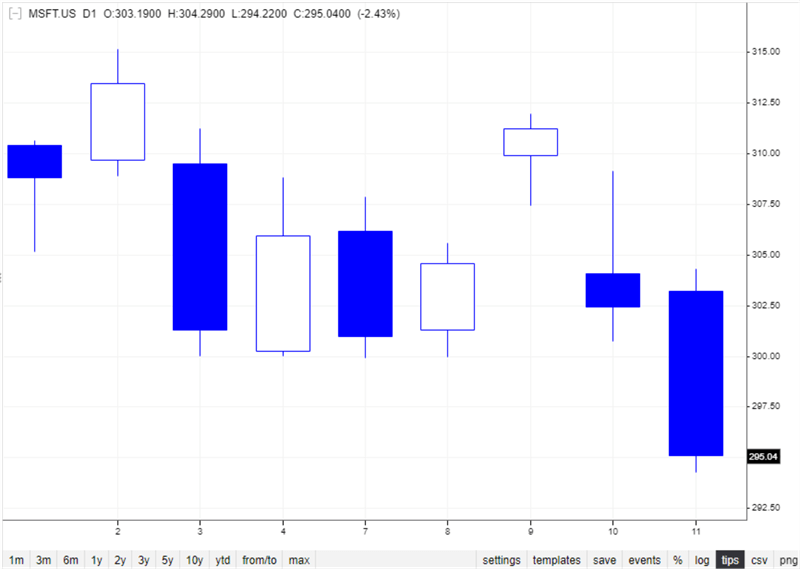 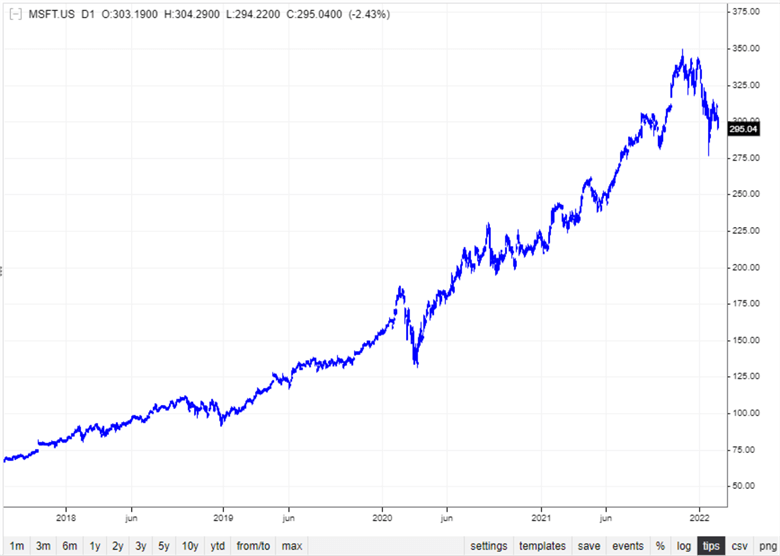 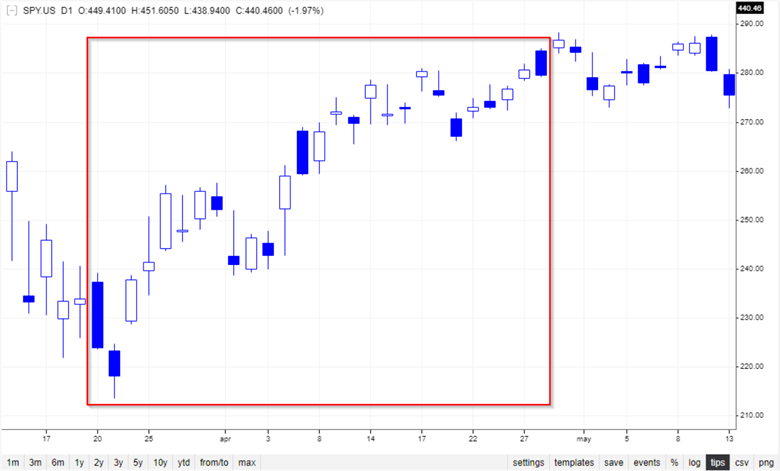 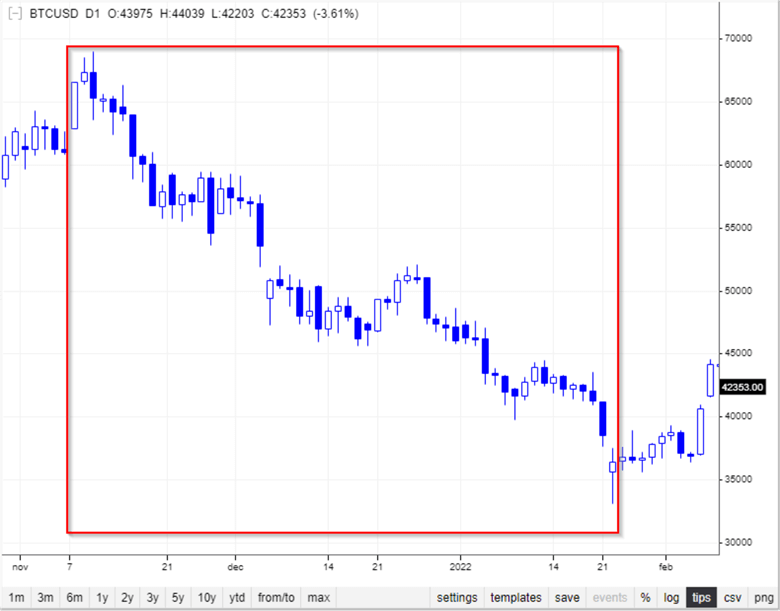 The last example pattern in this subsection is for a bullish harami. This is a two-candle pattern with a long black candle trailed by a shorter white candle. An easy way to remember the pattern is to think of it as resembling a "pregnant lady’s belly".

When this pattern follows a generally declining sequence of candles, it can signal a reversal to generally rising candles. 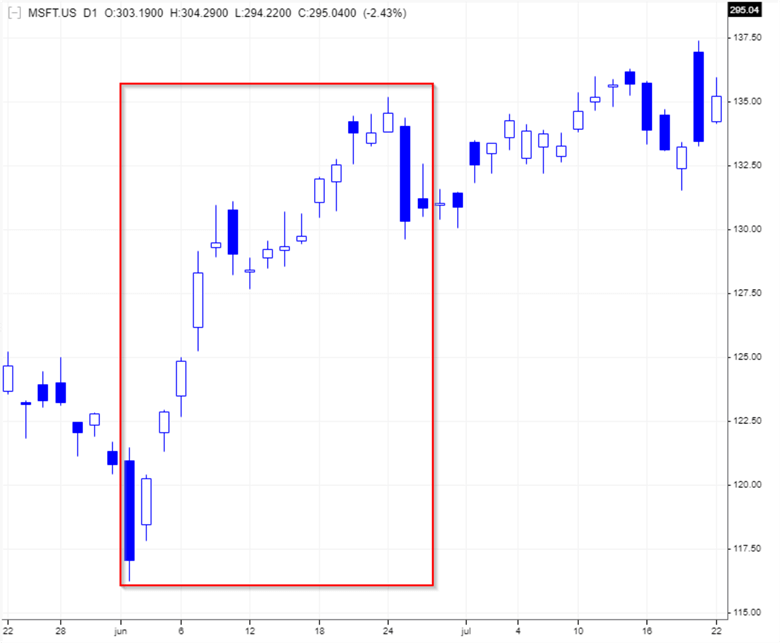 How to create a Heikin Ashi chart in Stooq.com

The expressions for the first period Heikin Ashi candle are as follow.

The expressions for the second and subsequent period HA candles are as follow.

HA charts are not available from Yahoo Finance. HA charts are available from Stooq.com. The only difference in menu selections within Stooq.com for traditional candlestick charts versus HA charts is the selection of the chart type. The following screen shot shows the selection of Heikin Ashi in the chart type menu for the creation of a HA chart. Because you are relying on the Stooq.com website for computing HA values, a detailed understanding of the preceding expressions for HA values is not critical. Nevertheless, you may find it helpful for understanding the source of the values. 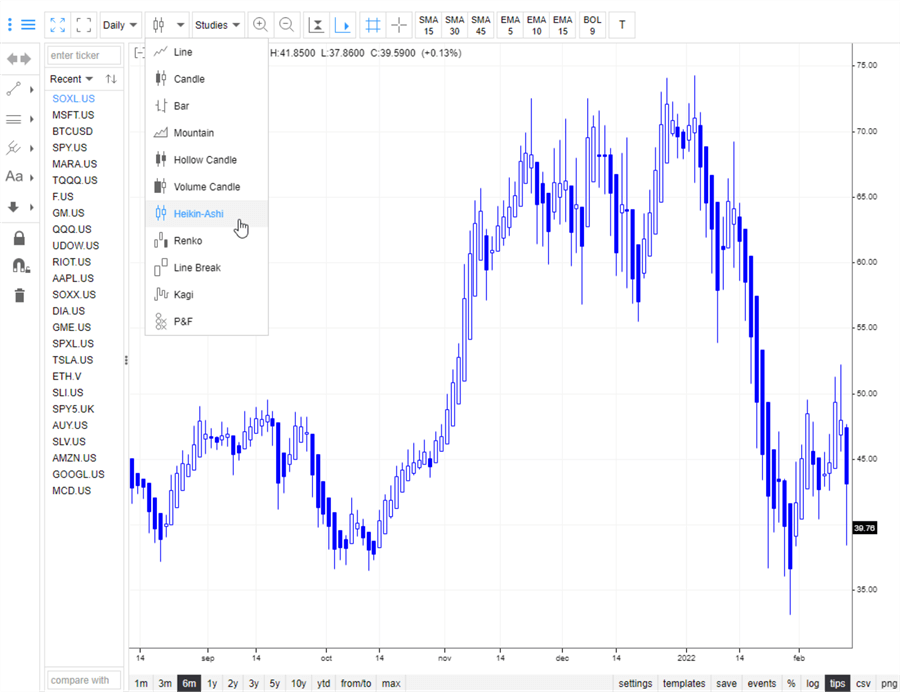 The next screen image shows a HA chart for the SOXL.US ticker symbol from Stooq.com. 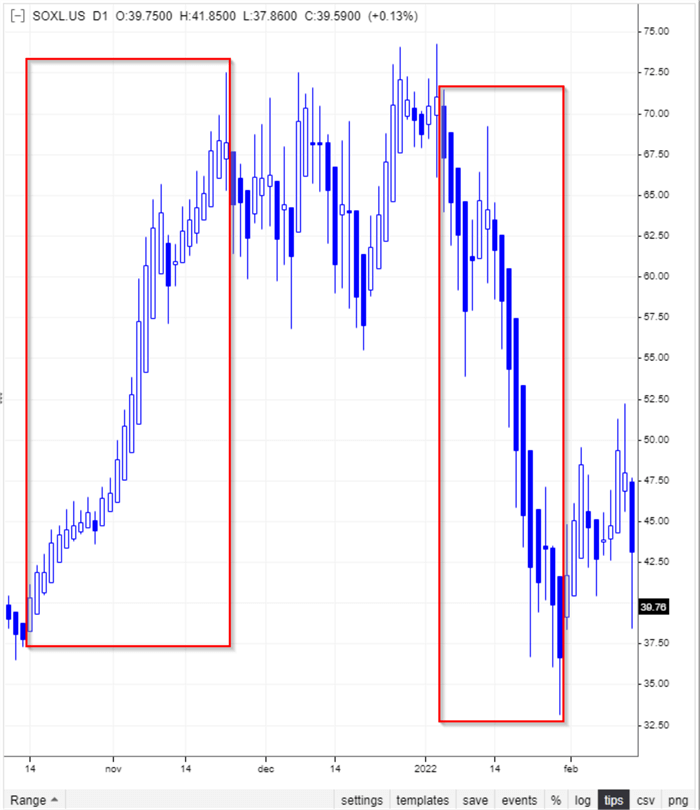 The following screen shot shows a traditional candlestick chart for the same overall date range as the preceding HA chart. 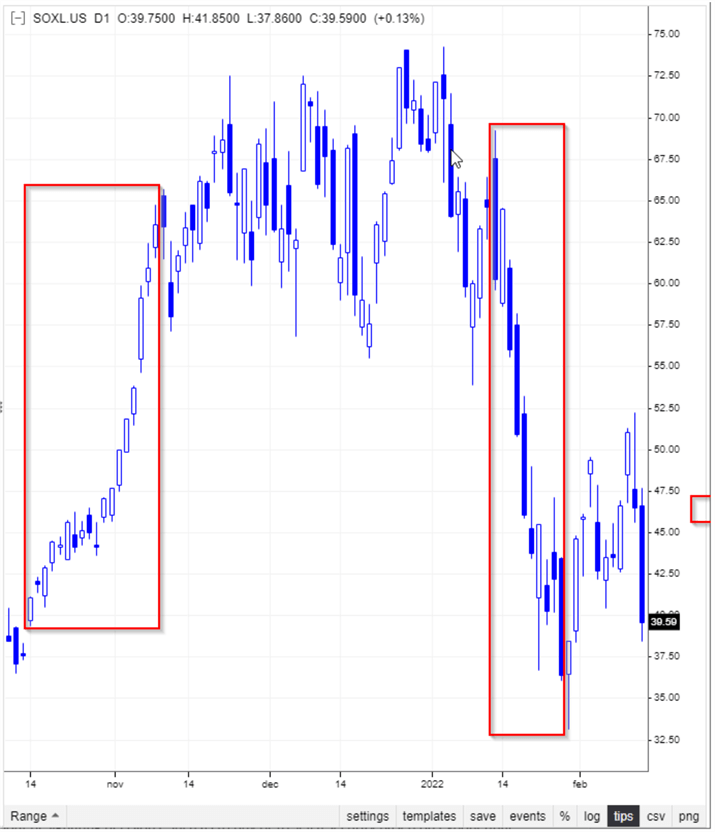 While the uptrend and downtrend patterns are not always as long as in this example for the SOXL.US ticker sample, they are often very obvious in HA charts relative to standard candlestick charts. Many traders and securities analysts find this feature particularly attractive.

To further illustrate how to spot an uptrend with a HA chart, three additional HA charts are presented and briefly described.

The chart below is for the NVDA.US ticker symbol at Stooq.com. The red box identifies a relatively strong uptrend. 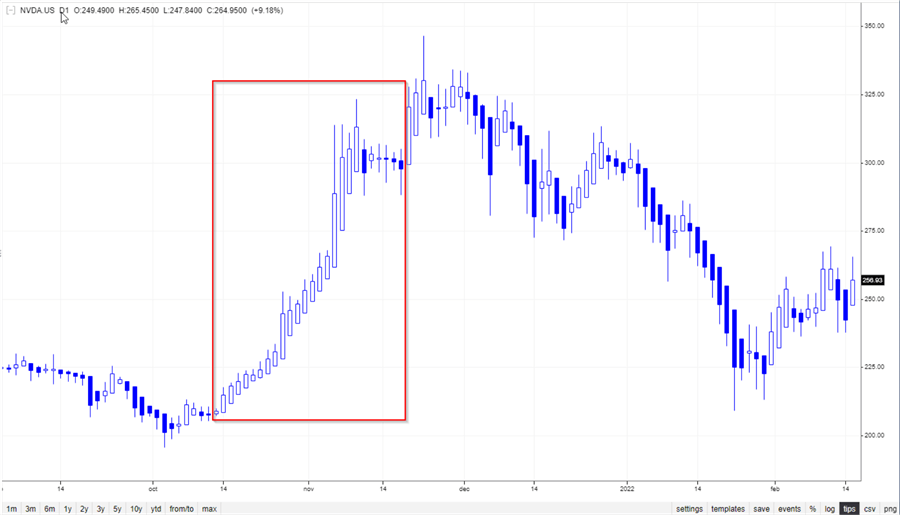 The next chart is for the Ford Motor Company ticker symbol (F.US). This chart contains three uptrends, which are each of their own red box. 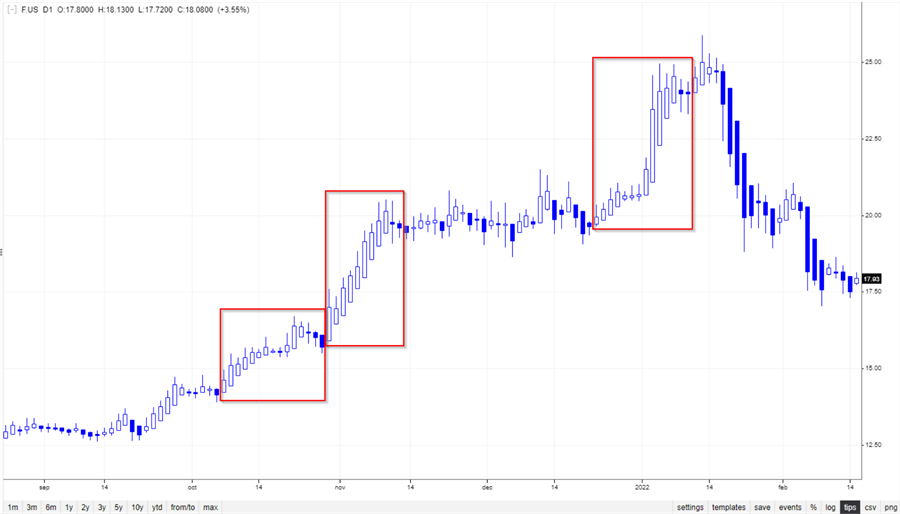 The final chart in this tip is for Laredo Petroleum, Inc., a gas and oil exploration and development company based in Texas. This chart reveals just one uptrend. 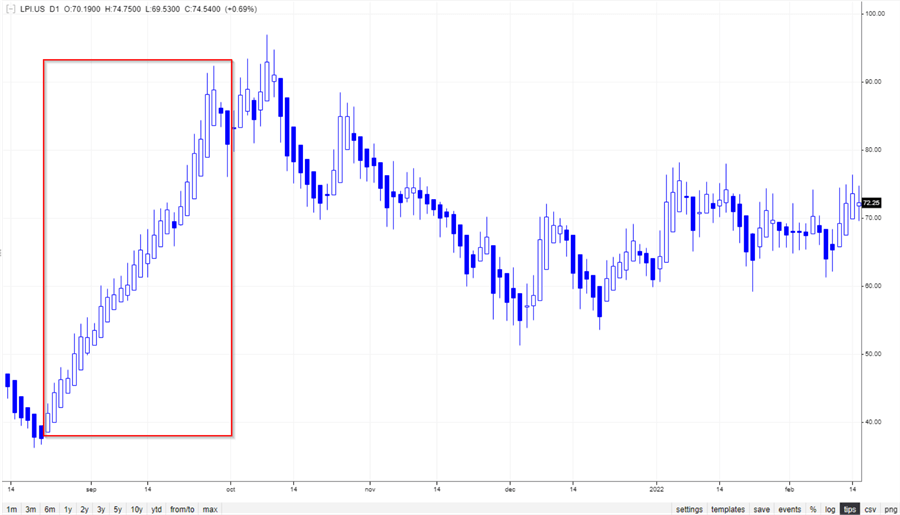 One obvious next step is to follow the instructions in this tip and see if you can generate the same chart images as those that appear in the tip. If you have other ticker symbols that you watch besides those covered in this tip, they would be especially good ones to examine in next steps. Use both traditional candlestick charts as well as Heikin Ashi charts for whatever ticker symbols you include in your next steps.