I am a database professional and an aspiring data scientist. I seek data science principles and data management best practices that facilitate the prediction of things like when to buy and sell financial securities. Please present and describe a model implemented with SQL code to predict based on the Relative Strength Index when to buy and sell financial securities. Demonstrate how to select better-performing model parameters.

The Relative Strength Index (also commonly referred to as the RSI) is widely used by stock market analysts and personal investors who are technically inclined. The tool was initially developed in 1978 by a technical analyst named J. Welles Wilder in a book titled "New Concepts in Technical Trading Systems". Stock market analysts refer to the RSI as a price momentum oscillator. RSI values can oscillate in the range of 0 through 100. A value of 0 indicates no rising price momentum, and a value of 100 indicates maximum price momentum. For stock-based securities, the RSI typically varies from somewhat below 30 through somewhat above 70. When the RSI is 70 or greater it is often called overbought. Likewise, when the RSI is 30 or less, it is often called oversold. Examples of how to use the RSI to decide when to buy and sell securities are abundant (for example, here, here, here, and here).

MSSQLTips.com published two previous tips on the RSI. The first prior tip was a general introduction to the RSI for T-SQL developers. This tip covered some computational issues with T-SQL for the RSI, and it showed some sample RSI results for six ticker symbols over a four-year timeframe from 2014 through 2017. It was a data mining tip that tried to link RSI values to stock prices, but it offered no model on how to predict when to buy and sell dates based on RSI values. The second tip drilled down on the computational process for the RSI with SQL. Furthermore, it offered a more complete comparison of RSI values computed with SQL versus RSI values published from a spreadsheet as in this authoritative source for stock market technical analysts.

The current tip represents the third examination of the RSI in MSSQLTips.com. The tip has two primary goals.

The code for computing RSI values for multiple ticker symbols

The code for computing RSI values for multiple ticker symbols is presented in two parts to clarify the main design issues.

Managing multiple ticker symbols in a while loop

The following code excerpt highlights the approach for looping through multiple ticker symbols. It also references the code for computing RSI values for each trading date for each symbol with a pair of comment lines that read as follows:

The next subsection focuses on the process details and code for computing RSI values for the trading dates for a ticker symbol.

The following code excerpt starts with a use statement that declares DataScience as the default database for the code. You can use any other database name you prefer so long as it contains the source time series data for the ticker symbols in a SQL Server table. Data are retrieved and processed from this table in the next subsection.

After the use statement, a declare statement designates five local variables.

Next, an insert into statement populates the @table_of_symbols table variable. This table variable has two columns: symbol_number and symbol. The symbol_number column has an int data type, and the symbol column has a nvarchar data type. The six symbols for this tip include: AAPL, GOOGL, MSFT, SPXL, TQQQ, UDOW. The first three are for mega cap technology stocks, including Apple, Google, and Microsoft. The second three symbols are for triple-levered exchange traded index funds: the SPXL symbol is based on the S&P 500 index, the TQQQ symbol is based on the NASDAQ Composite index, and the UDOW symbol is based on the DOW index.

The last statement before the while loop is a statement to create a table (rsi_and_close_values) that stores computed RSI values for ticker symbols on trading dates. Two columns (symbol and date) are row identifiers. The close column holds close prices from the source data table; close prices are used to designate buy and sell prices in the next section of this tip. The rsi column holds computed RSI values.

The next portion of the following code excerpt shows SQL statements to manage the while loop.

Computing and saving RSI values for a particular ticker symbol

The details of the code and processes for computing RSI values for a particular ticker symbol are described and illustrated for a small sample of 82 periods for three tickers in this prior tip. The current tip adapts the approach of the prior tip, and the current tip saves the underlying close values for the computed RSI values in a SQL Server table (rsi_and_close_values) for future reference. The sample for the current tip uses the same three tickers as the prior tip plus three triple-levered index exchange traded funds; the number of periods per ticker in the current tip is 2641. This tip's download includes a SQL file for populating the rsi_and_close_values table as well as creating and saving buy-sell cycle model results based on the values in the table.

This subsection presents the conceptual underpinnings of the computational approach to help you build customized SQL code for computing and saving RSI values in your own applications. There are four main steps to the process for computing RSI values. 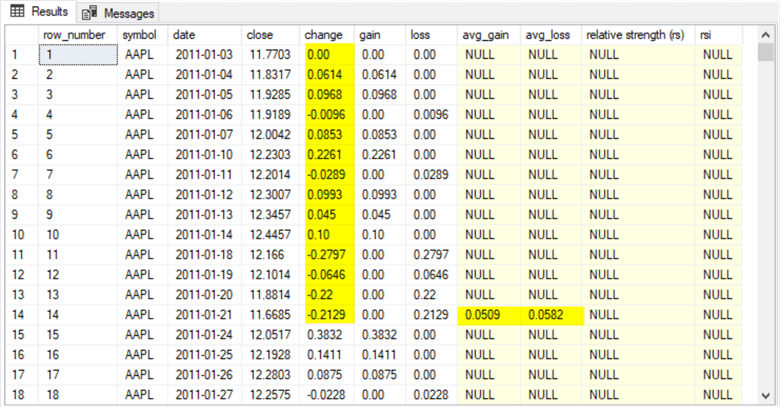 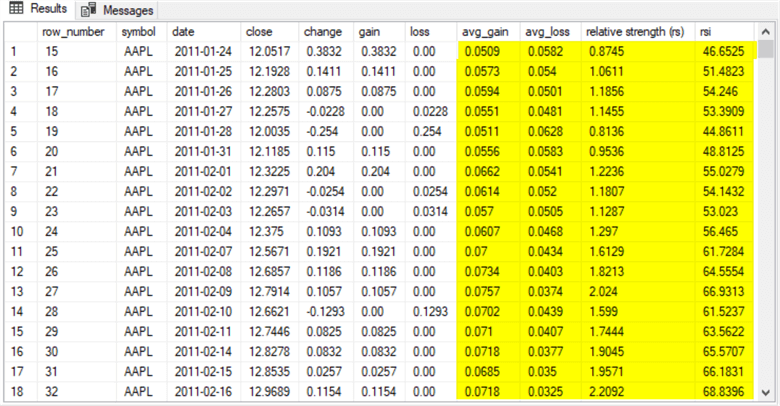 An interesting question is: how do you calculate the results in the preceding results set? The sql file in the download for this tip implements one possible answer to this question. However, there may be other reasonable answers to the question. The following points reveal why this may be so.

The following screen shot is for the first 18 rows in the rsi_and_close_values table. As you can see these are for the first eighteen trading dates in 2011 with both close and rsi column values for the AAPL ticker. 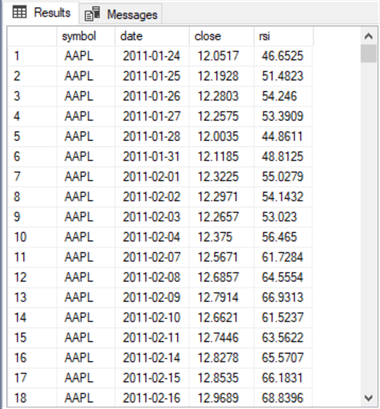 The next screen shot is for the last 18 rows in the rsi_and_close_values table. As you can see these are for the last eighteen trading dates ending on June 30 in 2021 with both close and rsi column values for the UDOW ticker. 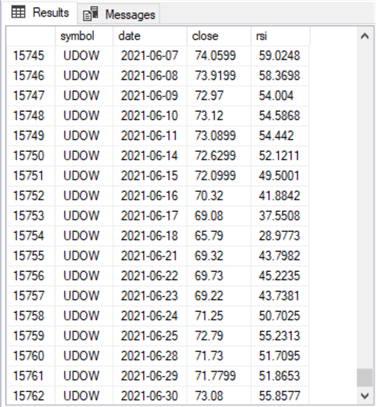 One model with two parameter sets

You can simulate strategies for trading based on historical RSI values and close prices with T-SQL code. This section presents and describes T-SQL code for evaluating two variations of an RSI security trading strategy. By simulating two or more variations, you can compare the results to assess which strategy variation yields the more profitable outcomes for a set of securities over a timeframe.

This section presents and describes the T-SQL code for implementing these two strategies. The results for each strategy is computed for the six ticker symbols in the rsi_and_close_values table that are populated in the preceding section. Buy-sell cycles are created for each ticker symbol over the nine and a half years of computed RSI values. The close values in the rsi_and_close_values table reflect the price at which securities are bought and sold, respectively, for buy and sell signals.

The rest of this section walks through the code for implementing the first of the two strategies. This tip's download includes two T-SQL scripts – one for each trading strategy mentioned above.

The code starts with the setup for a while loop that is similar to the code in the preceding section for populating the rsi_and_close_values table. Then, in the body of the while loop, the following processing steps are implemented.

Here are a couple of excerpts from the results set in the #for_buy_sell_30_70 temp table. 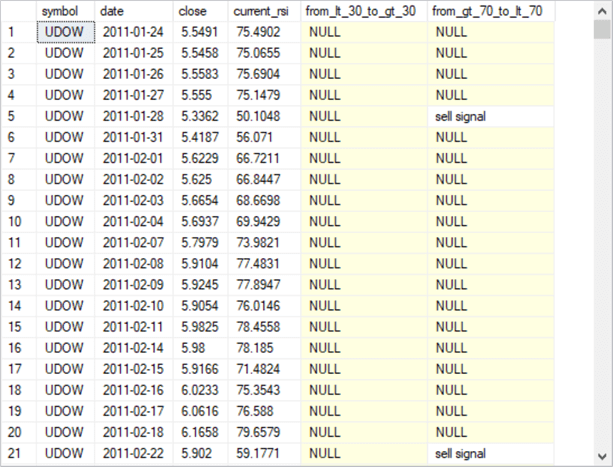 The next code excerpt is a nested query that extracts just those buy signal rows that are preceded by a sell signal row.

The following screen shot shows the results set from the #first_buy_signal_30_rows temp table populated by the preceding script. 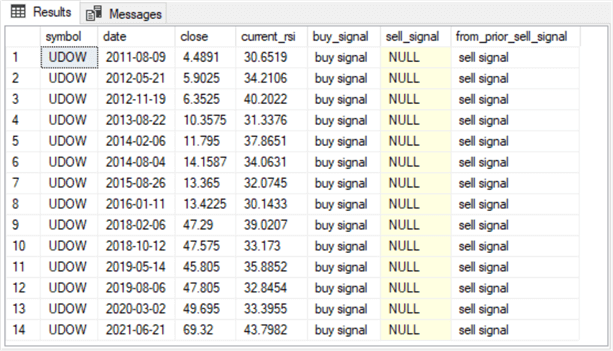 The next code excerpt is for sell signal rows that are preceded by a buy signal. The screen shot below the code excerpt is for the results set stored in the #first_sell_signal_70_rows temp table. Notice there are just thirteen rows in this results set. The preceding results set from the #first_buy_signal_30_rows temp table had fourteen rows. The extra row in the #first_buy_signal_30_rows results set is present because the underlying data starts a buy signal for a buy-sell cycle after the thirteenth sell signal, but the timeframe for computing RSI values ends before the matching sell signal row. Therefore, the fourteenth row in the preceding screen is an orphaned buy signal because it has no matching sell signal row to end the buy-sell cycle that it starts. 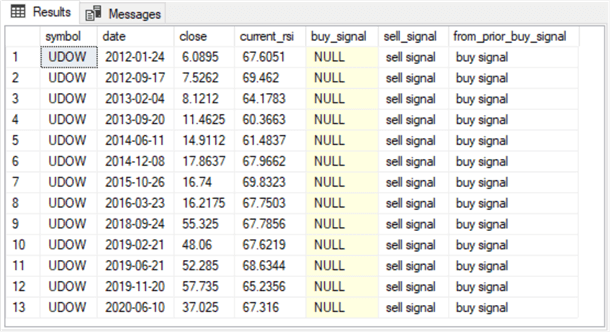 The last processing step to complete the code for implementing the first trading strategy based on RSI values has two main goals. First, it concatenates the results sets from the #first_buy_signal_30_rows and #first_sell_signal_70_rows tables. Second, it removes any buy signal rows without a matching sell signal rows that trails it. The second step also removes from the final results set in the #buy_sell_30_70_cycles temp table any sell signal row that starts a buy-sell cycle results set. This is because a buy-sell cycle can only start with a buy signal. Here's the code for the last processing step. 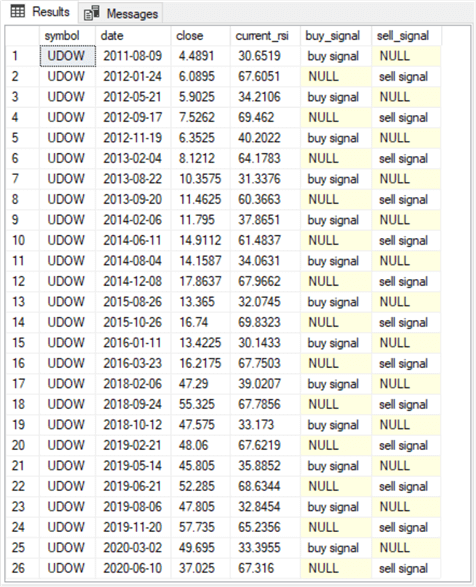 Here is the code excerpt showing the initial query for the second parameter set. 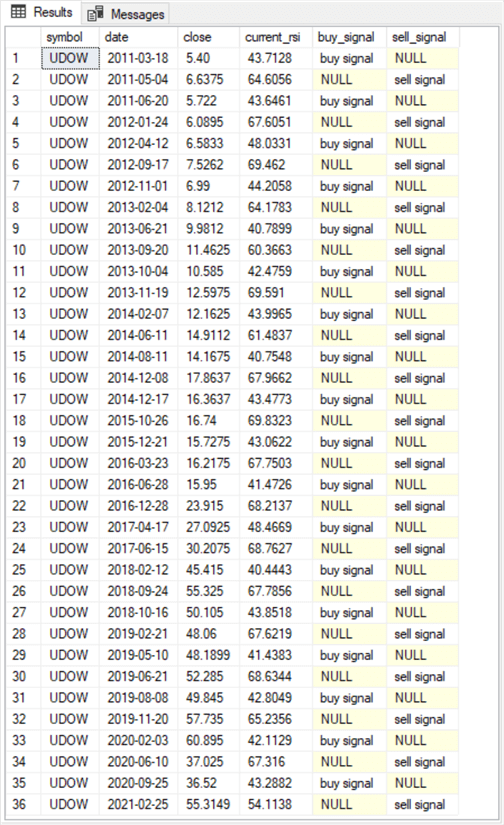 At this point in the tip, it is reasonable to ask: which set of parameters yield the best results? There is no easy answer to the question because the answer can depend on which securities you are tracking and for what timeframe you are tracking them. However, it is relatively easy to answer the question of what is the compound annual growth rate (CAGR) of the securities tracked in this tip for the nine and a half years for which this tip reports results. The CAGR is the average annual rate of returns from an investment starting at a beginning balance and running through an ending balance assuming the gains (or losses) are applied to the balance at end of each trade through the end of trading.

Here is a summary table of the CAGR values across security tickers tracked in this tip for each of the two parameter sets. The six tickers go down the side, and two parameter sets are referenced in column headers. 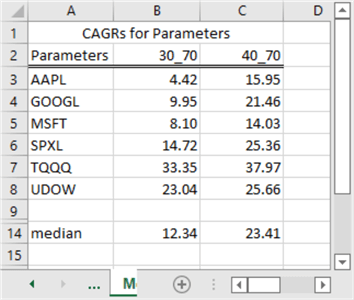 There are 13 pairs of buy-sell pairs for the TQQQ ticker with 30 and 70 parameter set. 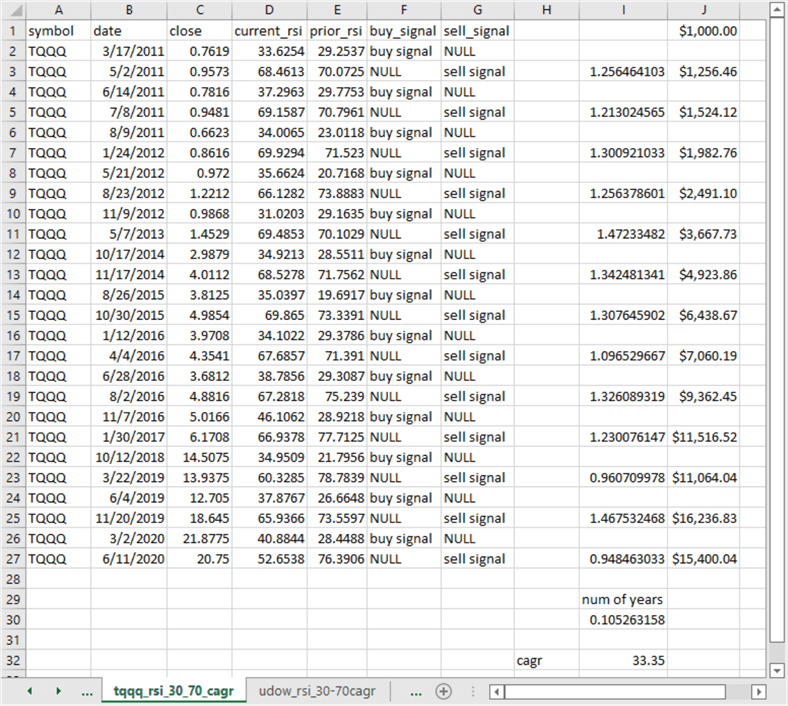 There are three files in the download for this tip.

The obvious next step is to load the source csv data into a SQL Server table and then run the sql script files to obtain the outcomes reported in this tip. Another next step would be to compare the outcomes for the buy-sell pairs in this tip to other tips reporting results for different models (for example, compare the results in the current tip to those in this prior tip).