Nowadays SQL Server Always On Availability Groups is the solution most DBAs use to cover their HA/DR needs. However, this doesn’t mean that Database Mirroring isn’t still being used in your environment, even if it’s a deprecated feature. If you manage dozens or hundreds of instances, and use many of them to house databases configured with mirroring (for whatever reason), wouldn’t you like to have a quick way to have an inventory of databases under such configuration?  Well, this article will provide you the tool to have such information at the tip of your fingers.

I will present in this tutorial a PowerShell script that will collect information about all the databases using SQL Server Database Mirroring throughout your entire database infrastructure.

In order to use this module, you’ll need the create the core objects found here.

For this particular module, one table will be created (in case it doesn’t already exist).  Below is more information about the table, so you that can get an idea of what data will be stored.

There will be times when you simply do not want to collect this information from all the registered instances you have in your Master Server List. To address this, simply modify the query text inside the variable $instanceLookupQuery within the PowerShell script and you should be good to go.

Here are the database objects that you should see in your central database, after executing the PowerShell script: 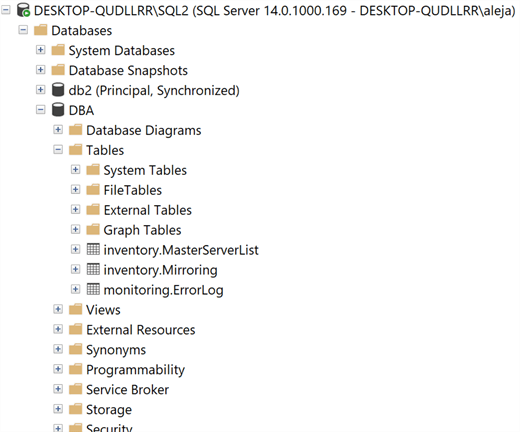 To demonstrate the output that the script produces, I have configured a test database (called "db2") in one of my instances. Therefore, after the script is executed, the output of the inventory.Mirroring table will look like this:

Notice that I’m using "High Performance" mode and that the state is "SYNCHRONIZED".

Now, let me change the operating mode to "High Safety" and re-execute the PowerShell script to see what the table now has stored:

Perfect, the script capture that modification and it is successfully reflected in the inventory.Mirroring table.

Every time the script is executed, the information from the inventory.Mirroring table is cleared and the most recent information is stored. If you’d like to keep some sort of historical information, you can adapt that logic in the PowerShell script.

If you’d like to know the SQL Server instance that got the errors, you would have to issue the query like this:

Check if there’s at least one database that is not fully Synchronized:

Sort the inventory of mirrored databases by witness so that you can see which databases don’t have automatic failover:

Get the full output of the inventory.Mirroring table using the server names instead of their IDs:

How to move database files of a Mirrored SQL Server Database