At Stack Overflow, the upgrade to SQL Server 2019 was not as smooth as expected. It introduced long recovery times and high CPU on a secondary, during synchronization activity after failover, patching, and network connectivity testing. This symptom wasn't present during similar activities and workloads under SQL Server 2017.

Enabling Accelerated Database Recovery (ADR, which I've also talked about here) was one approach to circumventing the problem. Long story short, though: ADR was not a miracle cure in this specific case; recovery still takes over 20 minutes, with sustained elevated CPU usage throughout.

In an ongoing support case, Microsoft's suggestion has been to throw hardware at the problem – specifically, more CPUs, to allow more worker threads to process redo. They also advised us to limit the number of databases in any Availability Group to 100 which, admittedly, aligns with guidance.

But we're not in a rush to do either of these things, because:

When I came on board in November, I was asked to look at this with fresh eyes. One of the first things I noticed was that most databases had old-style checkpoints, since they had been upgraded from older versions. The original source databases were created long before the SQL Server 2016 change to default new databases to indirect checkpoints (background here).

The change mainly provides more predictable checkpoint activity, really helping to smooth out I/O bursts. I've talked before about checkpoints and why we should all be using indirect checkpoints everywhere – most famously in this blog post.

In addition to the old-style checkpoint settings, I observed these other symptoms (some after enabling an Extended Events session to monitor checkpoint activity):

Then we applied these changes:

After the change, and over a similar observation period, we saw: 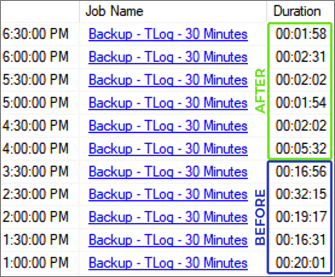 Unfortunately, like ADR, indirect checkpoints did not materialize to be the magic cure we needed, and I was not an instant hero with legendary status in my first month in my new role. The next time we performed a failover, the secondary still took over 20 minutes to recover, with pegged CPU for most of that time. Still, the improvements we did observe were positive, summarized nicely in this visual:

While they didn't solve our most pressing issue, we're still going to proceed with indirect checkpoints everywhere, and Accelerated Database Recovery by default, and staying on top of VLFs, since these are all positive changes that contribute to better performance and stability in various ways. I invite you to adopt the same philosophy – especially for indirect checkpoints, provided you are using a relatively modern I/O subsystem (check with your storage team if you're not sure).

And to wax a little more on indirect checkpoints specifically, while Microsoft did a great thing in changing the default for new databases, I wish they would do a better job of promoting this as a change people should proactively make to databases that have been upgraded. Also, I can't stop thinking about the fact that checkpoint configuration didn't come up at any point during the nearly year-long support case, until we brought it up. Maybe they knew it wouldn't help, but we still thought it was worth a try.

These changes are much easier to test and implement than changing your hardware or reconfiguring your Availability Group configuration. At the very least, just switch to indirect checkpoints, everywhere. On your standalone instances, the code is as follows:

If you are performing this on an Availability Group, though, you'll need to deal with additional scenarios. Most importantly, when the local database is not the primary replica, but also when it is "kind of" the primary replica because it is the "forwarder" in a distributed AG:

(This latter script will work just fine on standalone instances too.)

If you can't fix the checkpoint mechanism due to change control, doubt, or fear, but are having issues with high CPU / long recovery after failovers or other outages, you could at least checkpoint all of the old-style databases immediately prior to planned failovers:

This should minimize the amount of reconciliation that has to happen on the other end of the event.

Change all of your databases to indirect checkpoints. You should see trickle-down effects like faster log and full backups, even if they don't resolve any issues you're observing after failovers. And if you experience any negative effects, I'd love to hear about them below, but this is not a very risky change because it's so easy to switch back.

If you can't change the databases just yet, change your failover procedures to include a step that manually checkpoints all databases that are still using the old style (you might want to do this anyway).

See these tips and other checkpoint resources: