My Microsoft SQL Server database table doesn't have a last updated date/time column, but it has a RowVersion column. Can I turn that column into the date and time that the row was last updated via T-SQL code?

The short answer is "no."

Nothing in the RowVersion data type is related to the date or time the value was created. It is strictly an 8-byte value that increases sequentially as transactions hit the database. No "conversion" or function call can change that value into a date or time.

The long answer is much more complicated and will be the subject of this tip.

While Microsoft SQL Server does not associate this 8-byte value with the date or time it was created, you certainly can. To do that, we'll first need to learn a little bit about RowVersion and how it works.

At its core, RowVersion is just a number. It is stored as 8 bytes or 64 bits and presented to the users as its hexadecimal value. This is a RowVersion value, as shown in SSMS query output.

As transactions hit the database, the values assigned to RowVersion columns increase sequentially. For this demo, a new table was created in a database with no activity beyond this process, and four rows were created via this T-SQL code:

The query output shows that each row received a different RowVersion value that was exactly one larger than the row before. Notice that these values are not times, nor are they a number of seconds or microseconds since some start time. They are just numbers represented in hexadecimal.

Despite these two databases being on the same instance of SQL Server, they are not on the same RowVersion sequence.

Finally, no two rows can have the same RowVersion value. This T-SQL query will update all four rows from the prior demo in a single statement.

Despite the four rows being updated in one transaction, they received four unique RowVersion values. 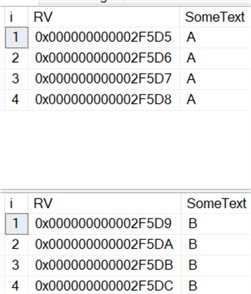 Having seen how RowVersion values are assigned, it is unreasonable to think that every single RowVersion value can be associated with its own date and time. If that level of detail is needed, then a datetime2 column needs to be added to the table(s) in question and updated whenever the row is inserted or updated. See this tip for assistance: Mimic timestamp behavior of other database platforms to store last modified date.

When building the custom table, one question needs to be answered: how precise does the table need to be? The answer to this question will determine the data type for the date/time column. A smalldatetime value uses only 4 bytes and has precision down to the minute. It can store dates up to June 6, 2079. A datetime2(3) uses 6 bytes and has accuracy to the 100th of a second. It can keep dates up to the year 9999.

This plan should be reconsidered if the accuracy needed is significantly higher than 30 seconds.

The custom table needs only two columns: the RowVersion value and the date and time. There are two ways to retrieve the RowVersion value. Both are shown here with comments to help choose which makes more sense for a given scenario. Both show options to show a SMALLDATETIME for the date and time, meaning it will have a precision no higher than 1 minute.  Here is the T-SQL code:

A SQL Server Agent job can add a new row to this table every few minutes or seconds as needed. The statement is straightforward.

For this demo, the job will be running every 5 minutes. 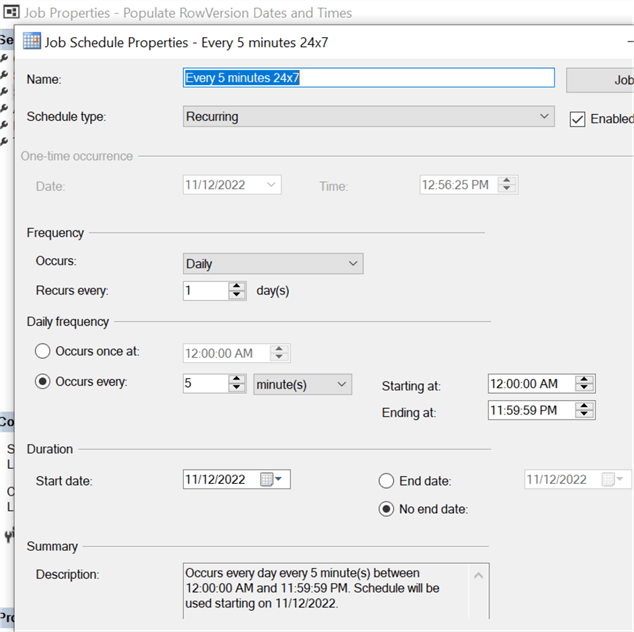 This function will convert a RowVersion value to a date and time near when it was generated. While this version looks for the end of the possible range, it could be easily modified to choose the beginning of the time frame. It could also return both times and offer a window of time during which the action was taken.

It is important to remember that if this table is added to a database long after it has been in use, it will only be able to calculate approximate date and time values from rows created or modified after it was put into practice.