Implementing a relational database schema can be difficult, especially when a proper model is needed that helps map out the relationship between the various attributes in the schema. In this tutorial, we take a look at the various aspects of building a data model which is a component of software engineering.

Entity Relationship Modelling is a graphical approach to database design. It employs Entity Relationship Diagrams (ERD), a flowchart that illustrates database tables, attributes, primary keys, foreign keys and how they interact with one another in business processes—making it easier for you to implement your schema. ER diagrams are essential as they represent data in a diagram manner. This makes it easier for non-technical business owners to have a unified view of data, relationships, functionality and business processes.

An entity is an object or concept (noun) that stores data in a database. In ER diagrams, entities are represented using a rectangle. The image below depicts an entity represented in an ER diagram: 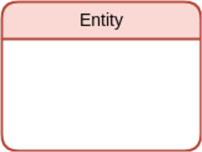 A collection of entities with similar attributes are referred to as entity types and can either be a weak entity type or a strong entity type.

Note: A weak entity does not have a key attribute.

In the diagram, the Purchase Order, a weak entity, cannot exist without the other entity, Purchase. This shows how weak entities are used in any ER Diagram. They are represented with a double rectangle and are dependent on strong entity types (denoted with a single rectangle), as seen in the image above.

A strong entity type is an entity with its primary key making them independent of any other entity. They are represented with a single rectangle in ER diagrams.

The table below shows the key differences between strong and weak entity types. 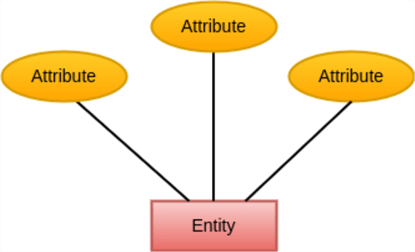 A relationship refers to how two or more entities interact with each other. They are displayed as diamond labels placed on the lines connecting the entities. In ER diagrams, relationships are represented by diamond shapes.

For example, the image below shows a "buy" relationship between a Customer entity and a Product entity. 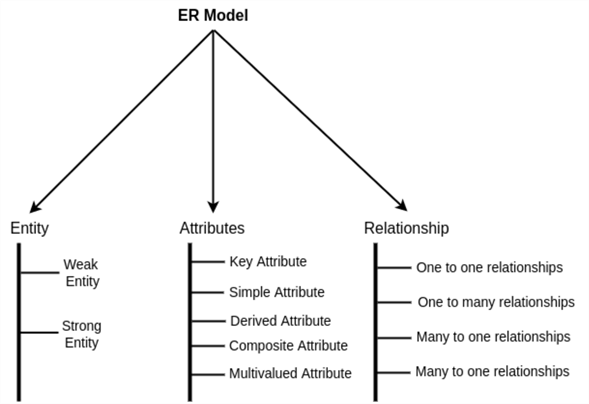 There are different types of cardinal relationships, which include:

The image below describes how each cardinal relationship is represented in an ER diagram. 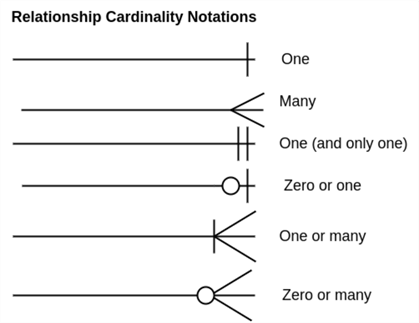 In the image above, the single circle ○ at the opposite end of the relationship indicates a minimum cardinality of zero and a maximum of 1, meaning an optional or partial relationship.

The one single bar | at the opposite end indicates "exactly one," so the relationship is mandatory or total.

Then, the Crow's foot notation (three-pronged symbol) indicate that multiple rows are affected by the relationship.

For example, the image below depicts a one-to-one relationship between a Teacher entity and a Subject entity, i.e., a teacher can only be associated with one subject.

The One-to-One relationship is depicted in an ER diagram with a single line connecting the two entities. In our diagram above, the line connects the Teacher entity to the Subject entity. The two perpendicular lines (|) indicate an important relationship between the two entities. In other words, the teacher can teach only one subject, and a subject has only one teacher.

A data model is a visual representation of how data are connected, processed, and stored inside the system. Data models describe how the structure of a database is modeled. While all three levels of a data model contain entities, attributes, and relationships, they differ in the purposes they are created for and the audiences they are meant to target.

The physical data model represents an actual database-specific implementation of the data model. It elaborates on the logical data model by assigning each column with the data type, length, nullable, etc. It helps generate the schema and offers database abstraction.

Note: Ensure the column types are supported by the Database Management System and reserved words are not used in naming entities and columns.

Below is an example of a physical data model:

How to Draw an ER Diagram

This article will use the following data requirement sheet for a school, which we will be modeled into an ER diagram.

A student has a unique student id, a name, grade point average (GPA), honors, and a club membership. A student can be assigned multiple subjects. A teacher can only take one subject each. A teacher has a teacher id and subject id.

The image below represents how each entity is shown in an ER Diagram.

Next, you must identify each entity's attributes to map them to the correct entity.

The table below shows the entity, primary key, and attributes of the data requirement sheet.

The image below shows the attributes of each entity and its types.

Next, you need to identify the relationship between each entity to understand the cardinality between the entities.

The data requirement sheet has the following relationships:

Finally, you must find the relationship between each entity to draw a complete ER Diagram.

They are several free and commercial tools for drawing ER Diagrams online. Some of these are:

This article covered most of the essential components of an ER diagram, including entities, attributes, relationships, and cardinality, which are core parts of drawing ER Diagrams.

Entities, attributes, and relationships are essential to any ER diagram. ER diagrams are easy to understand and do not require a technical professional to understand. ER diagrams can be easily translatable into relational tables, which can be used to build databases quickly.

David Ekete is a software developer and a technical writer passionate about providing solutions and sharing knowledge through articles.