The cache management mechanism plays an important role in performance of any system. Like any reliable DBMS, SQL Server enjoys a sophisticated cache management system for optimized performance without the need for any user intervention. There are ways to add a plan or data to the SQL Server cache or to remove a plan or data from SQL Server cache, but these techniques are only recommended for testing or troubleshooting purposes. Keeping in mind the importance of the cache mechanism, how could one get the plans and their usage statistics in SQL Server?

The following script may be used on SQL Server 2000 and forward. It will provide contents of the SQL Server plan cache along with usage frequency.

Script # 1: Get SQL Server plan cache contents and their usage for SQL Server 2000 and onwards

Following is a partial result set from script #1 for SQL Server 2000. 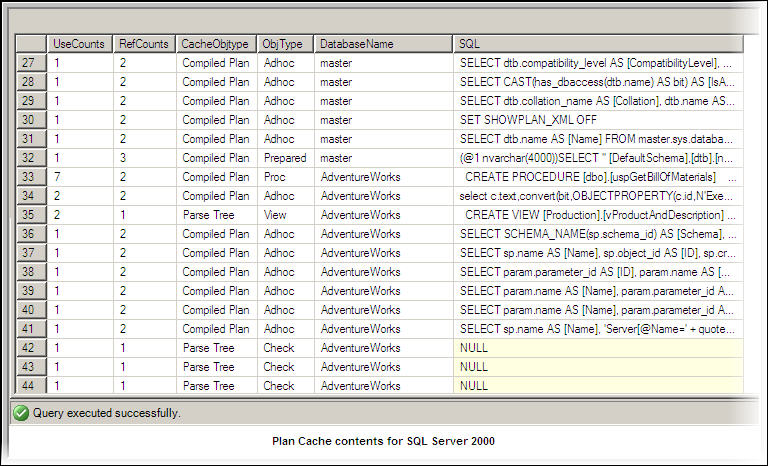 For SQL Server 2005 and forward, DMVs have been introduced to get this information.  So to get the contents of the plan cache along with usage statistics, you may use the following DMV script.

Script # 2: Get SQL Server plan cache contents and their usage for SQL Server 2005 and onwards

Following is a partial result set from script #2  for SQL Server 2005. 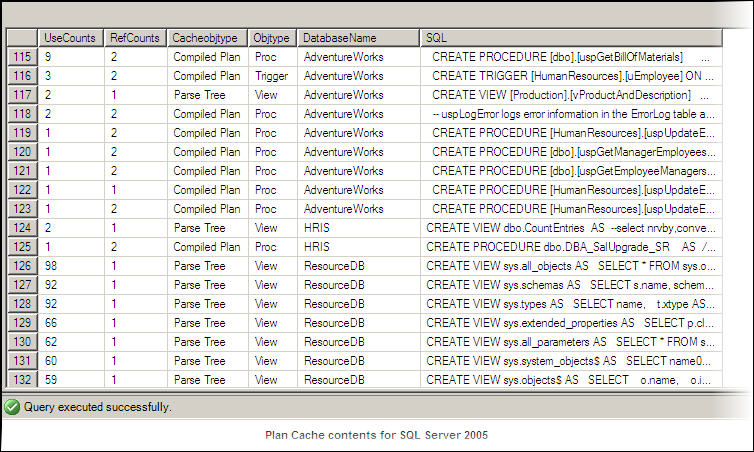 The overall fields used in the above scripts along with their description are as follows:

By using the above scripts you can gain insight into the objects along with their usage frequency in SQL Server. Remember for SQL Server 2000 you need to use the system table syscacheobjects and for SQL Server 2005 and onwards the DMV sys.dm_exec_cached_plans is used primarily.

While testing or troubleshooting you may need to clear the plan cache. You can use the following two commands for this purpose.

Beside the above commands, the following operations will also flush the entire plan cache and new batches will require new plans.

Altering a database with any of the following commands will remove all plans cached for that specific database.

The following operations will also remove cached plans for a specific database.

It is relevant to mention here that there is no way to remove just a single query plan from the cache for SQL 2005 and below, but for SQL 2008 this is now possible.  Take a look at this article.