In the earlier versions of SQL Server object dependencies were tracked using the ID of the object, as a result it was tough to keep track of Object Dependencies. However, in SQL Server 2008 Objects are tracked using the name of the object rather than object IDs. The biggest advantage of this approach is that you can track object dependency even after the object is removed from the database and you can also track even if an object is yet to be created in the database.

SQL Server 2008 database engine automatically keeps track of object dependency information whenever referencing entities are created, dropped or altered and it records this information in SQL Server system catalogs. A dependency is created between two objects when one object appears by name inside a SQL statement stored in another object. The object which is appearing inside the SQL expression is known as referenced entity and the object which has the SQL expression is known as a referencing entity.

The sys.sql_expression_dependencies system view holds one record each for a user defined object which has dependency on other object within the current database. A dependency between two objects is created when one object calling the referenced object appears by name in a SQL expression of another object. There are basically two types of dependencies tracked by the database engine in SQL Server 2008 namely Schema-bound Dependency and Non-schema-bound Dependency.

Let us go through an example to understand how the SQL Server 2008 database engine tracks object dependencies.

Use the below T-SQL script to create a table named Employee.

Execute the below T-SQL script to create usp_GetEmployeeName stored procedure. This procedure refers to Employee table which was created using the above script.

Now that we have a sample table and stored procedure setup, the following queries can be used to find the referenced and referencing information.

Execute the below scripts which queries "sys.dm_sql_referencing_entities" dynamic management function to find out all objects which are referencing to "Employee" table.

Execute the below scripts which queries "sys.dm_sql_referenced_entities" dynamic management function to find out all objects which are referenced to "usp_GetEmployeeName" stored procedure.

Execute the below scripts which queries "sys.sql_expression_dependencies" system view to find out all the objects which are referenced by "usp_GetEmployeeName" stored procedure.

Here is an example output of these queries for my test. 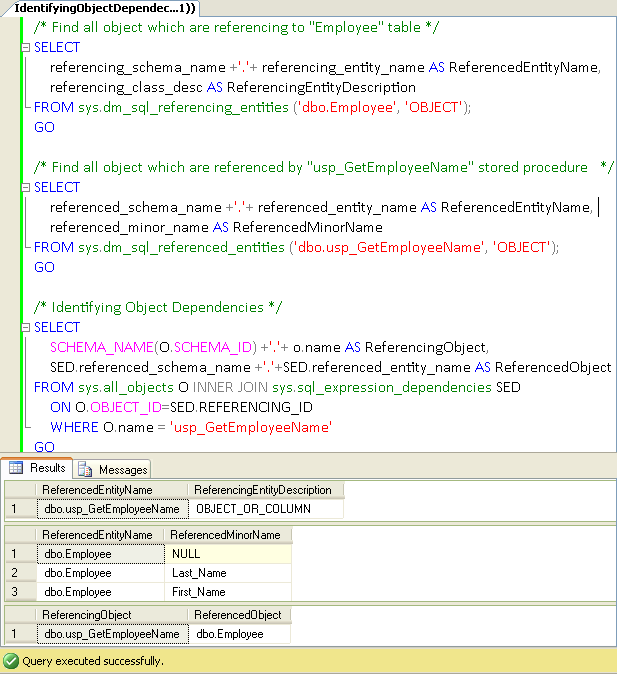 SQL Server Database Design with a One To One Relationship

Explore the Role of Normal Forms in Dimensional Modeling