Different Ways to Open up Activity Monitor in SQL Server 2008 are mentioned below:

In Object Explorer, right click the SQL Server 2008 Instance and select Activity Monitory from the drop down list as shown in the snippet below.

In the SQL Server 2008 Management Studio's toolbar, click Activity Monitor as shown in the snippet below.

In the Tools menu, click Options. In the Options dialog box expand Environment and then select the General tab. In the "At Startup" drop down you need to chose "Open Object Explorer and Activity Monitor" option from the drop down list and click OK. In order to see this change you need to close and reopen SQL Server 2008 Management Studio. 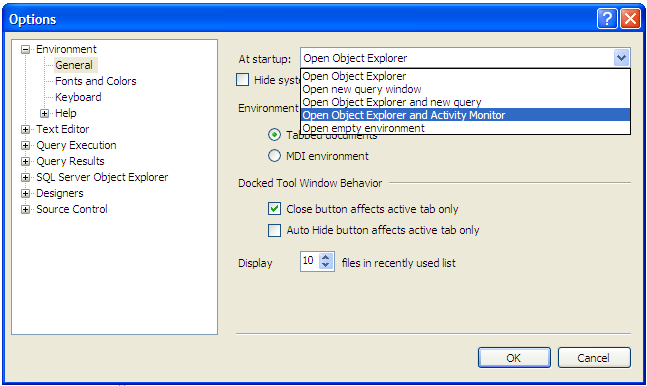 Overview: - This shows the graphical display of Processor Time (%), Number of Waiting Tasks, Database I/O (MB/Sec) and the Number of Batch Requests/second.

Processes: - This shows the list of all the active users which are connected to SQL Server Database Engine. Here, you can right click any of the Session IDs which you think are problematic and can run a SQL Server Profiler Trace to capture all its activities; you can also see the Session Details or can even KILL a process.

Resource Waits: - This provides valuable information with respect to a thread which is waiting for a key resource such as Memory, CPU and Network etc on an instance of SQL Server. This helps database administrators indentify potential bottlenecks with respect to Memory, CPU, Network I/O etc.

Data File I/O: - This displays disk level I/O information related to all the data and log files of user and system databases. Database administrators can quickly identify databases which are performing badly due to disk bottlenecks.

Recent Expensive Queries: - In this section, database administrators can quickly identify poorly performing queries in an SQL Server Instance. With the feature, which I like the most, you can right click any of the problematic queries and choose the "Edit Query Text" option to edit the query. Moreover, you can also see the execution plan of the poorly performing query by right clicking the problematic query and by selecting the option "Show Execution Plan".

SQL Server Monitoring On-premises and Cloud for Management and DBAs