We ran into a case recently where we had the logins scripted out on my SQL Server instances, but we didn't have the server roles nor their members. As a result, our recovery efforts were only partially successful. We ended up trying to figure out what the server role memberships were for a server we recovered, but we'd like not to be in that situation again. Is there an easy way to do this?

There is an easy way to solve this problem because of a couple of SQL Server security catalog views available to us. We're interested in the following two catalog views:

We'll need to execute two sets of scripts to generate T-SQL to allow us to recover in the event of a instance failure. The first script will ensure all the roles are created. The second script will populate the roles with the appropriate members. If you're thinking about all the steps required for a full recovery, you've probably figured out that we're missing:

These will be tackled in other tips. In this tip we're focusing on the problem of getting all the server roles recreated and all the members repopulated.

As of SQL Server 2012, it was possible to create roles at the server level. Therefore, if we only script for the traditional fixed server roles, we run the risk of missing a created server role that's important. Here's what we need to execute in order to build the T-SQL that will allow us to recreate any user-defined server roles.

Note that the reason we're filtering based on principal_id is to eliminate the fixed server roles like sysadmin and securityadmin. There's no need to create those roles. Also note that this particular script tests for the existence of the role before creating it. In the event that a role already does exist, we don't want the script erroring out.

Now what to do with this? One thing you can do is put the query into an input file and then use SQLCMD to query the server. If you specify an output file, then you have the T-SQL in a file ready to be run. This is the purpose of the SET NOCOUNT ON; line, for it removes the (# row(s) affected) message that's obviously not T-SQL. An example of the command-line for executing all of this via SQLCMD:

Of course, it's important in a follow-on step to copy this file off the server where the SQL Server is installed. All of this can be accomplished using a SQL Server Agent job. Here's what the SQLCMD generated script should look like when opened up in SQL Server Management Studio: 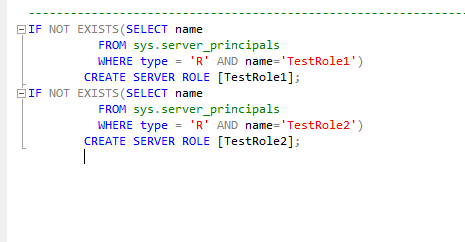 With all the user-defined roles created (if there were any), all that remains is to ensure all role memberships are properly restored. To do this, we'll use both sys.server_prinicipals and sys.server_role_members:

We do have to filter out sa. The reason for this is sa cannot be assigned to a role. It's already a member of the sysadmin server role so there shouldn't be a need to add it to another role. If we try and add sa to a role (even sysadmin) we'll receive an error. Therefore, we'll simply filter it out. If you've renamed the sa account in your installations (a good practice), then modify the script accordingly.

As far as automation is concerned, you can use the same mechanism you did to restore the roles, for instance, a SQLCMD script run from a SQL Server Agent job. Here's an example of the output opened up in SQL Server Management Studio: