When Windows Server 2008 was launched a few years ago, there was a lot of hype about the features introduced in the new operating system. It boasts of a lean, mean operating system that you can spin up with very little overhead. You're probably aware of the marketing campaign that Microsoft came up with for the launch back in 2008: the crouching server. With Windows Server 2008 comes a variation of installation called Server Core.

What is Windows Server Core?

Windows Server Core is a stripped-down, minimal configuration installation option of Windows Server 2008. When it first came out, I called it the Linux version of Windows just because you don't have the fancy GUI and Windows Explorer shell that all Windows administrators have gotten used to. Managing the server means going back to the good-old-days of MS DOS, ramping up on Windows PowerShell or managing it remotely using the Remote Server Administration Tools (RSAT). You do have minimal GUI available such as Task Manager, Notepad and Registry Editor. Having a stripped-down version of the operating system provides several benefits: 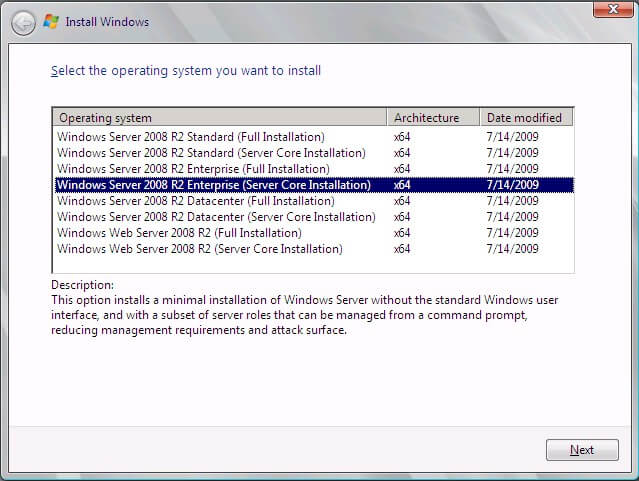 After logging in, you will be presented with a command-line interface for you to start configuring the server. This is where you take those rusty old MS DOS commands from your toolkit and start pounding away. The first thing you need to do after the installation is to activate Windows. This can be done via the slmgr.vbs script. You can use the /ipk switch to provide the Product Key and the /ato switch to activate Windows. Activation will be a bit more challenging when the Server Core machine is not connected to the Internet. A workaround for this is to temporarily request access to the Internet just for the purpose of activation.

NOTE: SQL Server 2012 requires Windows Server 2008 R2 Service Pack 1 so make sure you download and install it on all server operating systems that you intend to use.

For configuring the server, you have the option to use the following:

Since sconfig.cmd is very intuitive and user-response driven, I'll skip that as well. I will slightly talk about CoreConfigurator since it's a GUI-based utility which we are all very familiar with.

You can launch sconfig.cmd by typing in sconfig from the command prompt. 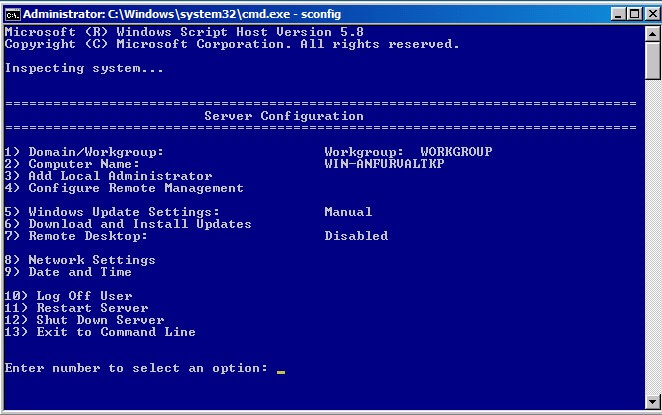 Notice that you have everything you need to start configuring the server - change server hostname, configure network settings, etc. However, since it is driven by the user response, you still have to manually type everything. If you use native MS DOS commands and Windows PowerShell, you can easily write up a script to perform all of the tasks and run the script once, eliminating the need to manually type and potentially make mistakes in the process. Windows PowerShell has to be enabled first before you can even use it.

To change the time zone on the Server Core machine, you can use the tzutil.exe command below, replacing the time zone value as appropriate.

To display the list of time zones that you can select from, you can use the /l switch. 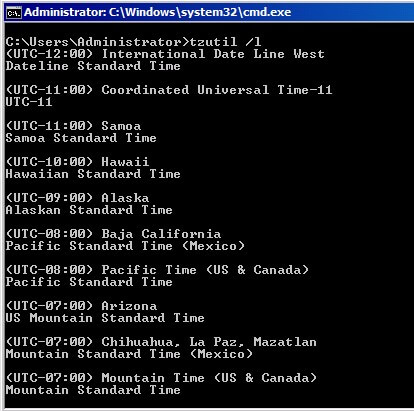 Before we can even join the server to the domain, we need to configure the network settings - specify static IP address, subnet mask, gateway and DNS servers. For this server, I will use the following network configuration.

For standardization purposes, I will first rename my network adapter. This will be helpful especially when you have multiple network adapters, as in the case of a Failover Cluster. We need to display the name and properties of the network interface that we need to configure. For all network-related configuration tasks, we will use the netsh.exe command. 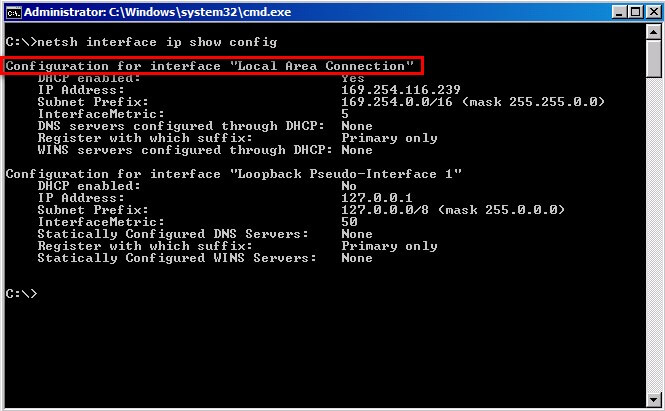 Next, we will change the IP address, subnet mask and default gateway values

Finally, we will assign the primary and alternate DNS servers. I used the validate=no parameter on my netsh command because even if the IP address of the DNS servers have been successfully assigned, you will still get the error message "The configured DNS server is incorrect or does not exist." 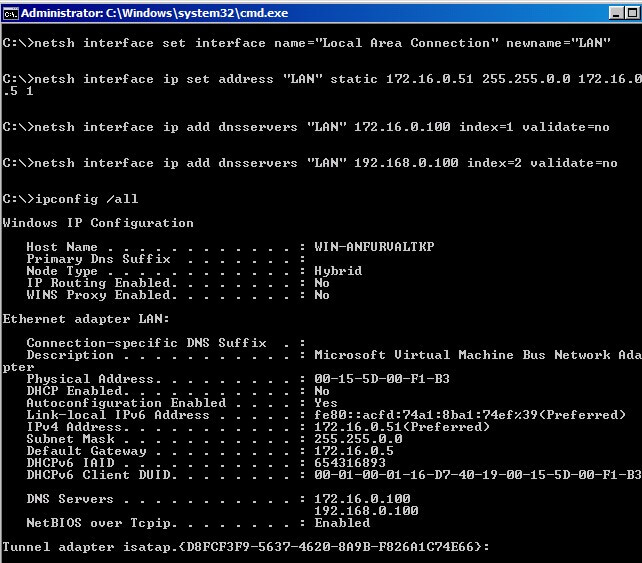 Rename the Server and Join it to the Domain

We need to rename the server and provide a meaningful name to the machine prior to joining it to the domain. In order for us to rename the server, we need to first identify the current server name that was assigned during the installation. The command hostname can be used for this purpose.

After rebooting the machine, we are now ready to join it to the domain. We will use the netdom command to accomplish this task.

While we can log in directly to the Windows Server Core machine, we probably won't do so since most of our servers are in the data center. We need to enable the server to allow remote management via Remote Desktop, Windows Remote Shell or MMC.

Both the .NET Framework 2.0 and 3.5 are prerequisites for installing Windows PowerShell 2.0 and SQL Server 2012. As both are disabled by default, we need to add both of them as features in Windows Server Core. To do so, we will be using the Deployment Image Servicing and Management tool, or the dism.exe command. 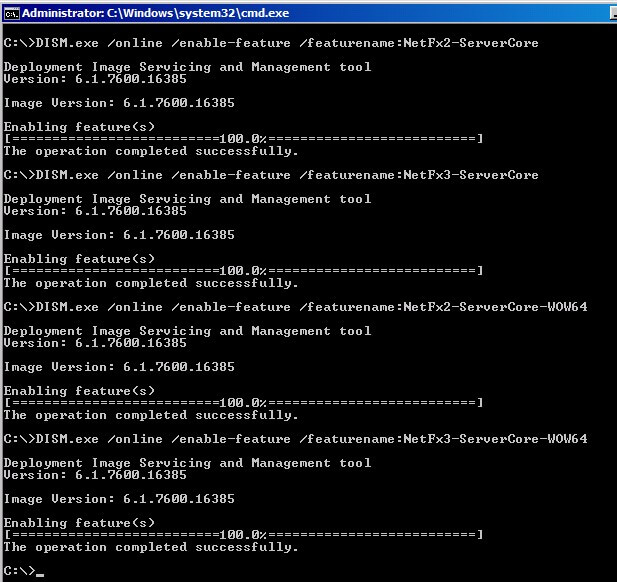 Now that the .NET Framework has been enabled on Windows Server Core, we can now enable Windows PowerShell. We will perform this task using the dism.exe command 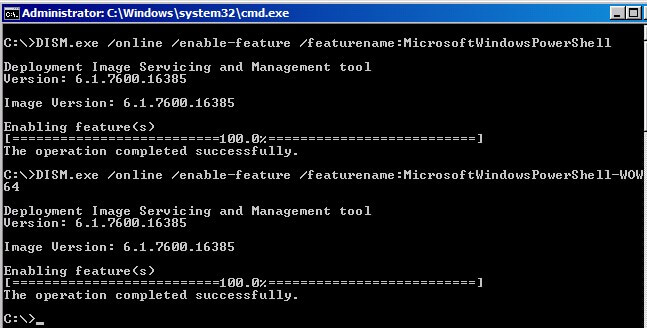 So far, we've prepared the Windows Server Core machine for the SQL Server 2012 installation using mostly MS DOS commands available in Windows Server 2008 R2. In the next tip in this series, we will look at performing some of these steps using Windows PowerShell so that you can compare between the two approaches and see which one you prefer. This will also give you some insights on how you can create scripted installation and configuration of your base operating system prior to installing SQL Server 2012.