These are the different scenarios for data synchronization using SQL Data Sync: 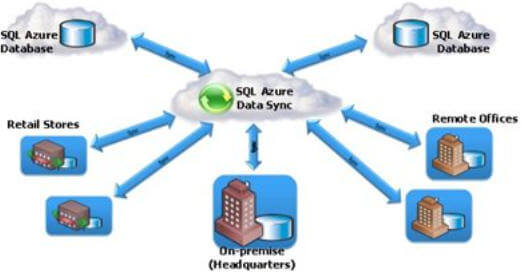 Please note, you need to have at least one Windows Azure SQL Database instance which works as a hub for the sync group in the hub-and-spoke topology.

With respect to names of database objects, there are certain restrictions for the name of the objects (database, tables or columns) such as the object name must not contain printable characters, a period (.), left square bracket ([) or right square bracket (]).

The information is based on SQL Data Sync - Preview. It might change in the final release of the product. Please check the latest documentation on msdn.

Only include the tables which are required as per your business needs in the sync group; including unnecessary tables can have impact on the overall cost as well as on efficiency of the synchronization.

Prudently set the frequency of automatic synchronization. Synchronize only as often as is required by your business requirement or needs. Synchronizing too often can increase the traffic and hence increasing the overall cost. To offset the traffic, certain sync groups can be synchronized on a less frequent basis. For example, for a payroll sync group you can do synchronization once a month (or a week) instead of doing synchronizations hourly or daily.

There are many other best practices, guidelines and optimization techniques mentioned on msdn documentation.

You can define policies to apply when there are conflicting changes and these policies are:

Please note, SQL Data Sync is in preview as of writing this tip and features might change in the final release of the SQL Data Sync product; for latest updates on SQL Data Sync refer to this msdn documentation.