SQL Server provides the UNION, EXCEPT, and INTERSECT set operations. How do they work and how can they be used in SQL Server?  Can you provide any examples?  Check out this tip to learn more.

SQL Server provides the UNION, EXCEPT and INTERSECT set operations which work on complete rows from two queries to generate one result set. They are drawn from the fundamental operations of set theory. In set theory, these operations always have a result where every element is distinct. So these operations will not return a row more than once. SQL Server includes the UNION ALL operation which acts like a UNION, but will allow a row to appear more than once. SQL Server does not currently support an EXCEPT ALL or INTERSECT ALL.

Since these operations compare complete rows, the results of the queries must have the same column names, in the same order, and the types of the columns must be compatible. When comparing rows, it treats a null as equivalent to a null.

gives all of the 4666 numbers up to 10000 that are divisible by either three or five. But it only gives each number one time and in an arbitrary order. If we want to put them numeric order we can add an ORDER BY clause at the end.

UNION ALL returns all results from either set whether or not they are unique. So executing:

returns numerous duplicates. However, it will do so much more quickly as a comparison between the execution plans for those two queries shows. 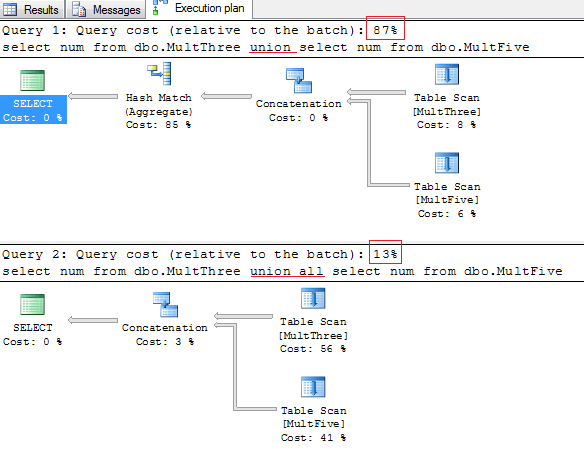 The EXCEPT operator returns the results which are in the first query but not in the second. This is tied to the concept of relative complement in set theory and may be called the set difference. So:

returns the rows that have multiples of threes which are not also multiples of five. As a Venn Diagram it looks like: 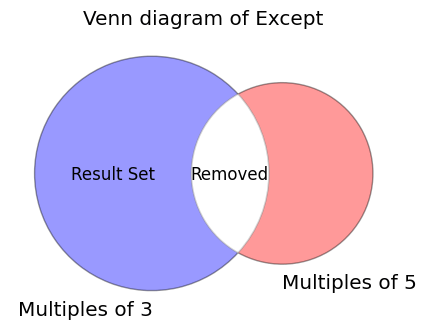 Of course, in SQL this could be rewritten without the EXCEPT as: 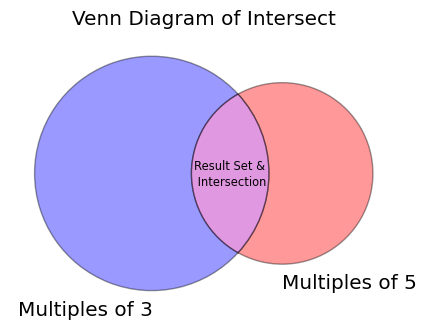 A query using INTERSECT could be rewritten without it by using exists instead, it would look like:

In this example, the two queries have similar performance, but the version using EXISTS instead of INTERSECT is slightly faster. Of course, in this particularly case, we could get the same results while dropping the DISTINCT and dropping the requirements to handle nulls since the tables have no replicated data and have no nulls. But that would not capture the full logic of what INTERSECT does. We could also use IN instead of EXISTS here to simplify the query since there is only one column, but if there were more columns involved INTERSECT will compare all of them while IN could only compare one column or expression.

The set operations of UNION, UNION ALL, EXCEPT, and INTERSECT provide an elegant way to work with different result sets in SQL Server. Unlike most other operations, they operate by comparing all columns involved in the query at once. When comparing the columns, they will treat NULLS as being equivalent. Also, other than UNION ALL, they all implicitly make the results DISTINCT which can have implications for performance as well as for the results returned. With these considerations in mind, they can help simplify certain types of queries that may involve multiple result sets.

Compare SQL Server Datasets with INTERSECT and EXCEPT

UNION vs. UNION ALL in SQL Server

Using CROSS JOIN queries to find records out of sequence

Getting Started with SQL INNER JOIN