SQL Server 2014 will be released with an In-Memory OLTP feature for OLTP workloads to significantly improve performance and reduce processing time when you have a plentiful amount of memory and multi-core processors. In-memory OLTP allows you to create a memory optimized table which resides completely in memory and is resilient if the server crashes. But what about data durability of memory optimized tables? I heard there is new type of stored procedure which improves performance even further when working with memory optimized tables? What about transactions or isolation level support for these types of tables?  Check out this tip to learn more.

Looking at declining hardware prices, SQL Server 2014 is releasing an In-memory OLTP feature which leverages today's servers with large amounts of memory and multi-core processors. The In-memory OLTP feature allows us to create a table which resides completely in physical memory, significantly improving the performance of the OLTP workload and reduces the time required for processing. With this new feature, SQL Server 2014 is well positioned to take full advantage of changing hardware trends and modern applications.

In my first tip in this series, "SQL Server 2014 In-Memory OLTP Architecture and Data Storage", I talked about these features in detail:

In my second tip, "Overview of Applications, Indexes and Limitations for SQL Server 2014 In-Memory OLTP Tables", I explained the following:

Now if you are wondering why someone needs a table without data after restart, there are certain scenarios for temporary storage such as storing web sessions, data staging, etc.  Remember, these tables don't require any disk IO (as no data gets stored) during transaction processing operations on these tables and meets all the other transactional requirements; i.e. they are atomic, isolated, and consistent.

When you create a natively compiled stored procedure, you need to specify the NATIVE_COMPILATION option as part of your procedure creation syntax (you can learn more about this in this tip). The process flow for creating natively complied stored procedure is very similar to the process of creating a memory optimized table as shown below. When you execute the CREATE PROC DDL command, the query gets optimized (please note, queries get optimized at the time of procedure creation) and the C code is generated followed by compilation into machine\native code. A native procedure DLL produced after the compilation then gets loaded into memory for execution. 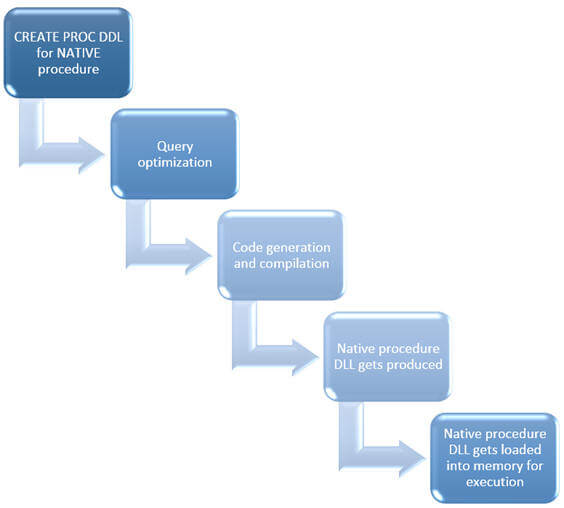 Unlike natively compiled stored procedure, an interpreted T-SQL or traditional T-SQL (both query or stored procedure) can access both traditional disk based tables as well as memory optimized table and with that you have access to the full T-SQL surface area. But as said before, this will not yield performance like natively complied stored procedures. You can consider using interpreted T-SQL when you want to run some ad-hoc or reporting style queries, or you want to speed up the process of the application migration.

The lowest isolation level supported for memory optimized tables is Snapshot; it means all transactions are a snapshot based on the memory optimized table. If you remember, these tables are based on a multiversion of rows, which are stored in the memory as part of table data itself.  Whereas if you are using Snapshot Isolation or Read Committed Snapshot Isolation for disk based tables the database engine stores a multiversion of the records in the tempdb database. These are the types of isolation levels supported for memory optimized tables, which can be specified in natively compiled stored procedures or when using interpreted T-SQL.  Also the isolation level can be specified using the following table-level hints:

For all above supported isolation levels, the logical read time of a transaction is set to the start time of the transaction.

The In-memory OLTP engine has built-in conflict detection and validation mechanism to ensure consistency by failing one of the transactions and hence you need to use retry logic to handle conflict and validation failures.

If you have a transaction spanning across disk based tables and memory optimized tables (called cross container transaction), you need to be aware that there are certain combinations of isolation levels supported and not supported as described below: