Microsoft is releasing SQL Server 2014 with a new set of In-Memory OLTP features to significantly improve the OLTP performance and reduce the processing time for servers with a large amount of memory and multi-core processors. But how is this functionality different from the DBCC PINTABLE command? What are the design principles for this feature? How does the data get stored in this new type of table? How is In-Memory OLTP different from the existing SQL Server disk based tables?  How does it all work?  Check out this tip to learn more.

In-Memory OLTP is a new feature in SQL Server 2014 which significantly improves the OLTP workload and reduces the time required for processing. The project code name of this feature is Hekaton (a Greek word) which means hundred or hundredfold; although this new feature does not improve performance to that extent, it improves overall performance significantly. The performance gains depend on the hardware infrastructure you have and how you are writing your queries. With this feature, SQL Server 2014 is well positioned to take full advantage of the changing hardware trends and modern application requirements.

SQL Server was traditionally designed to have data stored on disk for persistence and bring data in memory when needed for serving query requests. The main reason for this architecture was to minimize the requirement for main memory, because it was traditionally quite expensive. Now with the declining hardware prices we can buy servers with much more memory and multi core CPUs. The core objective of this new feature to is utilize the changing hardware trends. Based on early results, Hekaton utilizes today's hardware and improves the performance several fold in comparison to traditional disk based tables.

The In-memory OLTP features are a new database engine component, which is fully integrated into SQL Server and runs side by side with the traditional database engine. It allows you to declare a table to be stored in main memory (i.e. memory optimized table) so that your OLTP workload can access this memory resident data faster.

For memory optimized tables, all the data is already stored in the memory and unlike disk based tables.  With Hekaton pages don't need to be brought into buffer pool or cache. For data persistence of these memory optimized tables, this new engine creates a set of checkpoint files on the filestream filegroup that keeps track of changes to the data in an append only mode and uses it during recovery\restore processes.

Are SQL Server 2014 memory optimized tables the same as the DBCC PINTABLE command?

There is a myth that In-memory OLTP and DBCC PINTABLE are same feature, but there is no truth in this statement. These are two different features and are based on two different architectures. DBCC PINTABLE is now a deprecated feature of SQL Server because of its potential highly unwanted side-effects.

When you marked a table to be pinned using the DBCC PINTABLE command, SQL Server didn't flush the pages brought into memory of that table, because they were marked as pinned pages.  When new pages needed to be read, SQL Server would use more memory to accommodate the request. The side-effect of this architecture, with a large table, is that it could fill up the entire buffer cache and not leave enough cache to serve other requests adequately. Further, even with pinned tables, there was a cost of bringing the pages into memory the first time when referenced, which was no different than any other disk based table for the first read. Pinned tables also required the same level of latching, locking and logging with the same index structures as traditional disk based tables. 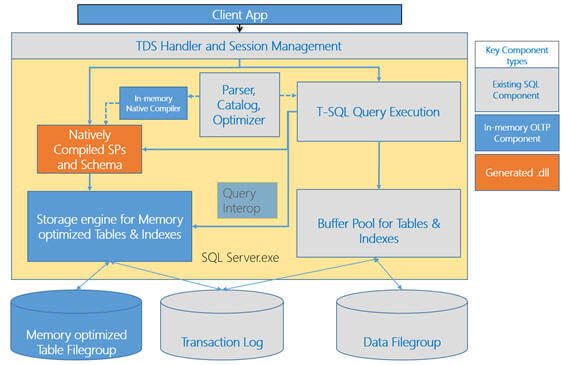 The In-memory storage engine manages user data and indexes of the memory optimized tables. It provides transactional operations on tables of records, hash and range indexes on the tables, and base mechanisms for storage, check pointing, recovery and high-availability. For a durable (more on durability in next part of this tip series) table, it writes data to filestream based filegroup on disk so that it can recover in case a server crashes. It also logs its updates to the SQL Server database transaction log along with the log records for disk based tables. It uses SQL Server file streams for storing checkpoint files which are used, to recover memory optimized tables automatically when a database is recovered or restored.

Other than these items, as I said In-memory OLTP is fully integrated into the existing SQL Server database engine. Hekaton leverages a number of services already available in SQL Server, for example:

Memory optimized tables have a completely new row format for storage of row data in memory and the structure of the row is optimized for memory residency and access. Unlike, disk based tables for which data gets stored in the data or index pages, memory optimized tables do not have any page containers. As I said before, In-memory OLTP uses multi-version for data changes, which means the payload does not get updated in place, but rather rows are versioned on each data change.

As I said, In-memory OLTP uses multi-version for concurrency, it means for a given row there could be many versioned rows depending how many times the particular record gets updated. The In-memory OLTP engine has a background, non-blocking, co-operative, garbage collection system which removes versions of a record which are no longer visible to any active transaction. This is important to avoid filling up memory.