I am new to TFS and I have heard that I can use it to publish a SQL Server Database project. I would like to be able to publish in multiple environments (e.g. development, staging and production) as well as on a schedule and on demand. Can you help to get me started?

TFS is Microsoft's application lifecycle management (ALM) product that provides the tools you need to effectively manage software development projects throughout the IT lifecycle. If you are familiar with the term continuous integration, TFS is the Microsoft product that you could use. I use the version control and build tools in all of my projects.

TFS Build is a great feature that allows on demand and scheduled builds of BI projects as well as just about any other kind of project. The basics of TFS Build are that you create a Build Definition specifying the project(s) to be built, where they are in TFS version control, and how the build will run; e.g. on demand or on a schedule. When the TFS Build runs, a TFS build server retrieves the code from TFS version control and executes the build. In the case of a SQL Server Database project, the build will create a DACPAC file which represents the schema of a SQL Server database. In other cases such as a .NET application, the TFS Build will compile Visual Studio project(s) that create a DLL, EXE, etc. TFS Build can also execute the Publish on a SQL Server Database project which can create a database (and all of its schema objects) or update a database to match the schema of the SQL Server Database project.

MSBUILD is Microsoft's command line executable that Visual Studio leverages to build projects. MSBUILD reads MSBUILD project files (i.e. an XML file) and performs the build steps per the project file. MSBUILD can also be used from the command line. 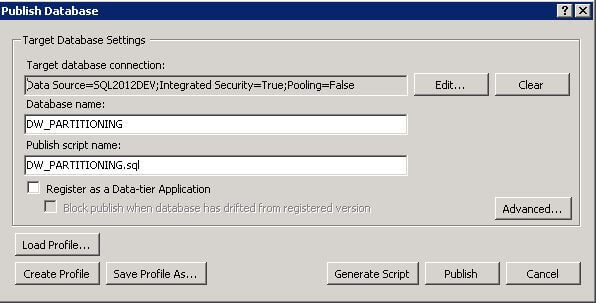 The following are the main points about the above dialog:

I saved my publishing profile as DEV; here is the Solution Explorer showing my DEV profile: 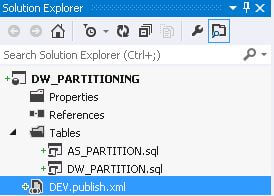 The above screen shot shows a very simple SQL Server Database project that only has two tables and the DEV publishing profile. It is a subset of a database project that I use to dynamically create measure group partitions in a SQL Server Analysis Services cube. This will be sufficient for demonstrating how to setup and run the TFS Build. 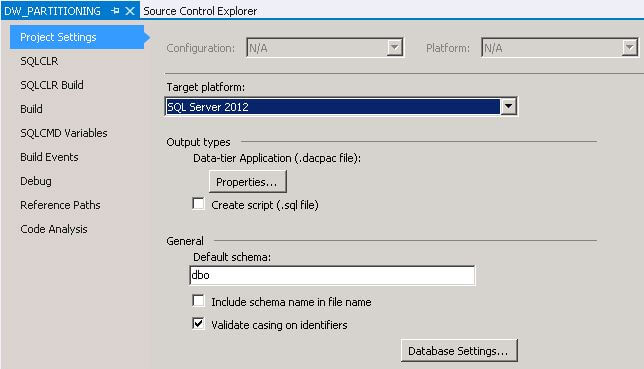 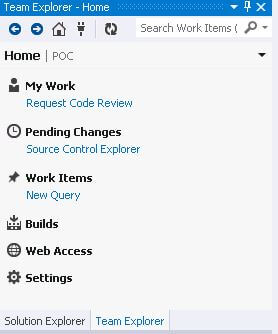 Click Builds in the Team Explorer to create a new TFS Build Definition. 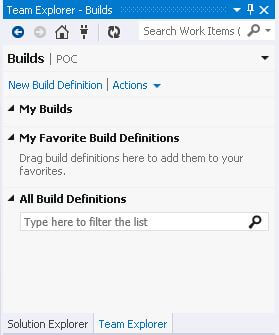 Click New Build Definition in the above dialog. You will now fill in the dialogs as shown below. 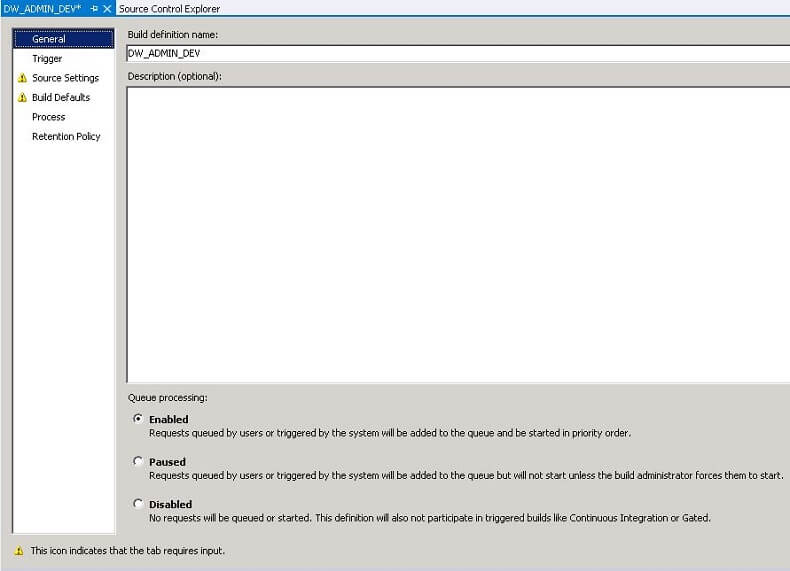 The Trigger allows you to specify when the Build is executed. I generally use Manual as this lets me execute the Build on demand. There are a variety of options to execute the build on a schedule.

Source Settings allow you to specify the folder(s) in TFS version control that contain the project(s) that you want to Build.

You can browse for the folder(s) by clicking the button in the Source Control Folder column: 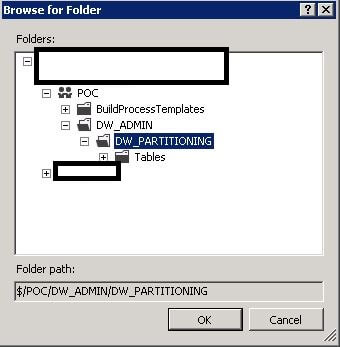 Select the TFS Build Controller and whether the build creates output files that need to be copied somewhere; e.g. a DLL or EXE.

There are quite a few parameters on the Process dialog; at a minimum you will need to specify the following:

Click in the Projects to Build text box and you can select the project(s) from a popup window. The MSBuild Arguments requires a little bit of explanation. I found this post on the SQL Server Data Tools Team Blog which had the details in the section "Publish Option 1: Setting MSBuild arguments in the Build Definition. Here are the details: 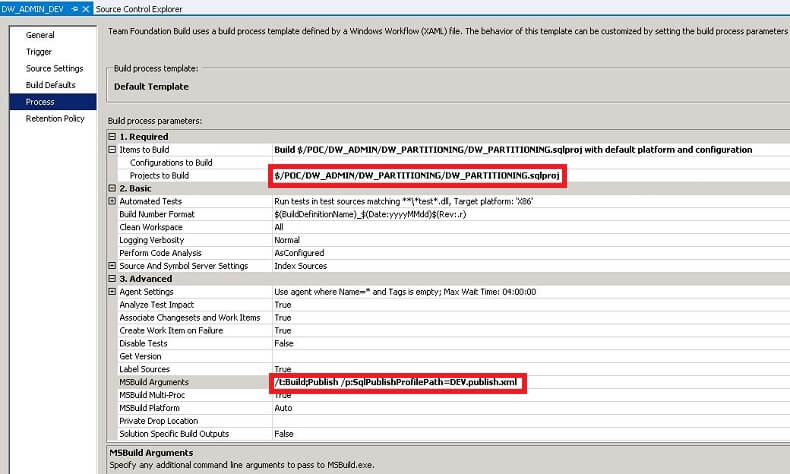 Note that you will generally create a TFS Build for each of your publishing profiles; e.g. DEV, STAGING, PROD, etc.

To execute a TFS Build, return to the Team Explorer and click on Builds. Right click on the build you want to execute and select Queue New Build. 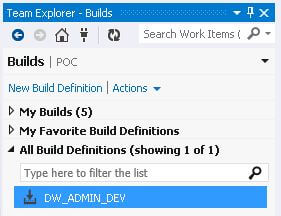 The Queue Build dialog will be displayed; review the settings and click Queue to launch the build. 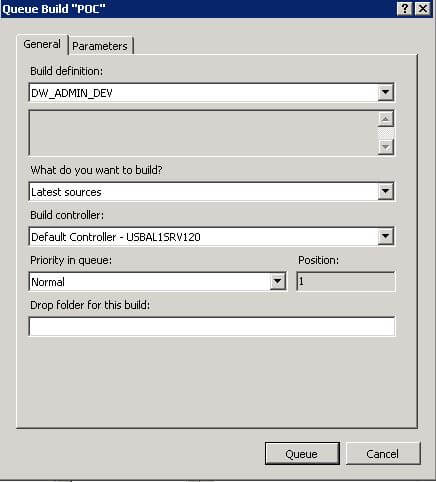 Return to the Team Explorer, look under My Builds, and locate the build you just launched. 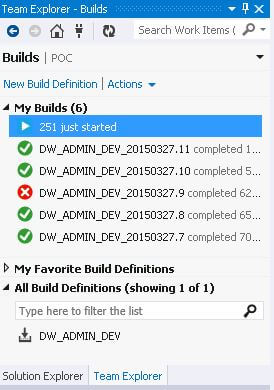 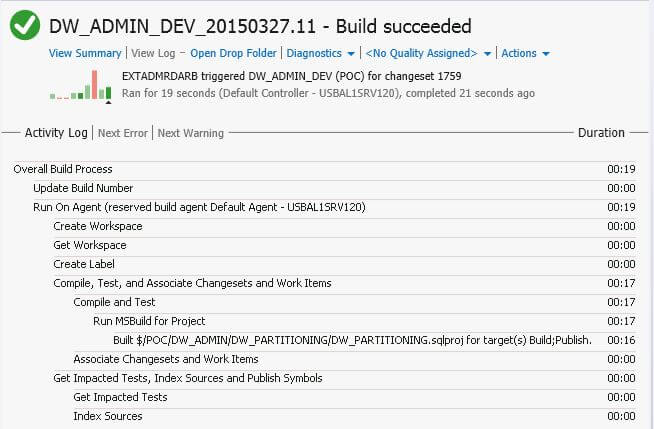 If there are any errors, they will be noted in the build log. In this case the build was successful. You can open SQL Server Management Studio, connect to the SQL Server specified in the publishing profile and see that the database has been created or updated.

My experience with TFS Build over the last three years has been good. I haven't had many problems but there is one that pops up occasionally so I thought I would mention it here. I've gotten this error a few times: