Git is a free and open-source distributed version control system. For an introduction on Git, please refer to the following tips:

When working with Git you can create multiple branches. A branch is a pointer to a snapshot of changes and can be used as a line of development. For example, if you want to add a new feature to your product, start a new branch and work on this feature in the branch alone. This way, your development work doesn't interfere with the work of others. Once your development is done, merge the branch back into the original branch where you can run integration tests.

There are many strategies to branching which are too far outside the scope of this tip to discuss. For the simplicity of this tip, we focus on the two main branches:

When you only have the main branch, you can create the dev branch from within Visual Studio. 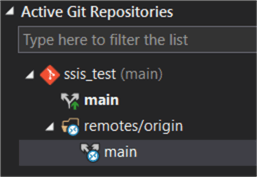 In Team Explorer, go to Branches and select to create a new branch:

Name the new branch Dev and check it out. This will create the branch in the local repository. To create it on the remote repository as well (the origin repo corresponds with the repo in Azure DevOps), right-click the dev branch and choose Push Branch. 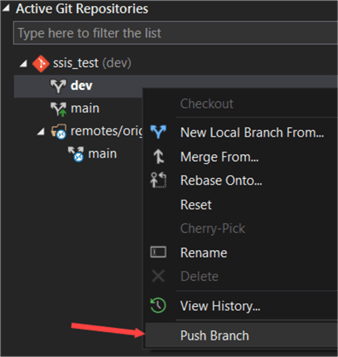 The dev branch is now also present on the remote which means other developers will be able to pull this branch onto their machines. Tip: you can see which branch is currently checked out in your local repo by checking which branch name is displayed in bold. You can also see the branch name that is displayed between brackets next to the repo name. 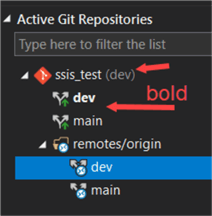 The key to avoiding conflict (developers working on the same object and making conflicting changes) is to use proper branching. However, it's not always possible to avoid conflict. When you merge two branches together and a conflict arises, you can perform merge conflict resolution where you manually inspect the conflicting file and decide which changes are applied and which are not. In theory, you could merge any file. With SSIS there are some issues:

The easiest way to deal with this is to make sure there is as little conflict as possible. This can be done by following some guidelines:

There are some files in an SSIS project where it's possible to have regular conflicts: project connection managers and parameters and the SSIS project file itself (this ends in the extension .dtproj). However, these files are much simpler and easier to merge. 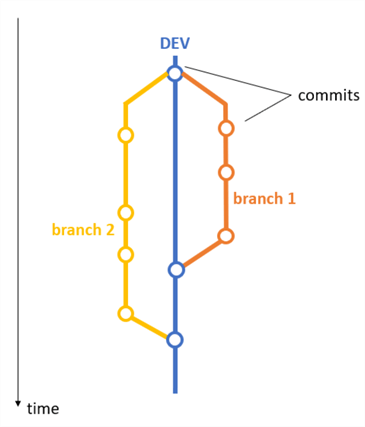 If both developers modified the same file, it's possible the last commit on the dev branch results into a conflict (if Git cannot resolve the merge automatically). In the second part of this tip, we'll look at how we can resolve such conflicts.