Sometimes when working on an Integration Services project with multiple developers, a merge conflict can occur in the git repository. In this tip, we'll show you how to resolve this type of conflict and provide alternative options.

In part 1 of the tip, the basics of git branching are described, as well as some best practices for using git in Integration Services (SSIS) projects. In part 2, we demonstrated under what occasion a merge conflict can happen when merging two branches together.  If you haven't already, please read both parts before proceeding with this final part of the tip.

When a merge conflict happens, the developer has a couple of choices:

When you select one of the files in conflict, you'll get a preview of the conflict resolution at the right side of the screen. This is divided in three parts: on the left, the file from the source branch, on the right, from the destination branch, and at the bottom is the resulting file after conflict resolution.

Using the arrows in the top right, you can jump between different sections of the file that have a conflict. In the screenshot, you can see a conflict that was resolved automatically by git. On the left, the new package is missing. On the right, the package is indicated in blue. In the resulting file, the package "Package 1.dtsx" has been added to the file.

There's a section git couldn't resolve automatically and this is indicated in red.

In the result, both options are still present and they are surrounded with < and > to mark the start and end of the conflict. The names of the branches are also included. In most tools for resolving merge conflicts, you can easily choose if you want the left or the right option. However, this currently is not possible in the browser. You have to manually type in the bottom window to get the desired result. A possible solution could be this one:

Once the conflicts are resolved, you can hit "Submit Merge" at the top. If you're sure you don't need to actually merge, but rather just take the source or destination file, you can select these using the buttons at the top. For example, for the suo file we can take the target file:

Once the conflict is resolved, the pull request can be completed. The graph looks like this: 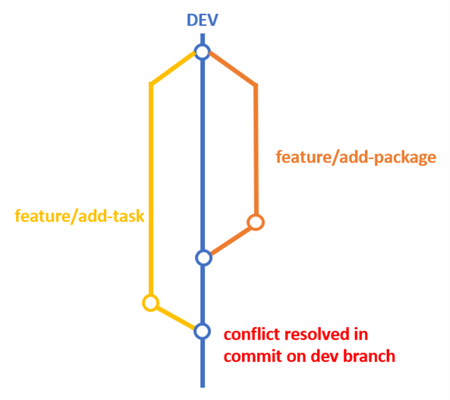 Resolve by Pulling the Dev Branch 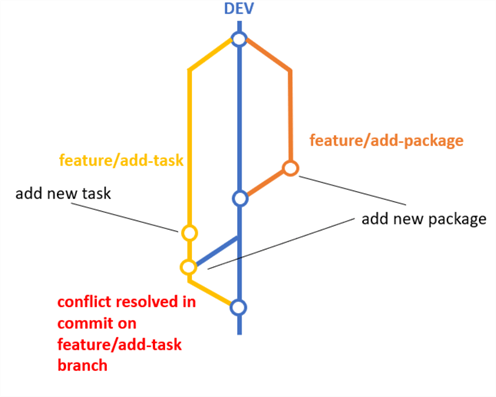 The advantage of this solution is that you can resolve the conflict on your own branch, not interfering with other people's work on the dev branch. If something goes wrong during conflict resolution, only your branch has this problem and other developers are unaffected.

Resolve by Rebasing the Branch

When you "rebase" your current working branch on the dev branch, it's like you are cutting your branch off and replanting it further down the timeline. For example: 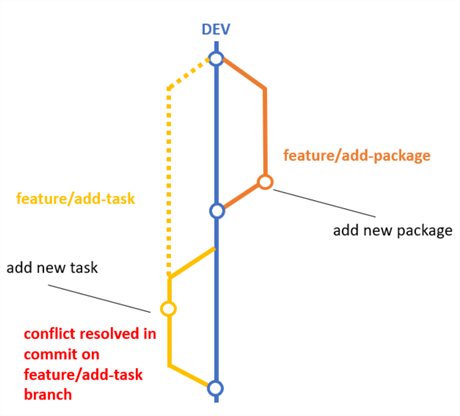 Although the end result is most likely the same from a code point of view, rebasing tends to be preferred as it keeps "branches clean". You can rebase in Visual Studio by right-clicking the branch and selecting "Rebase Onto…". Make sure you select the correct source and destination branch. 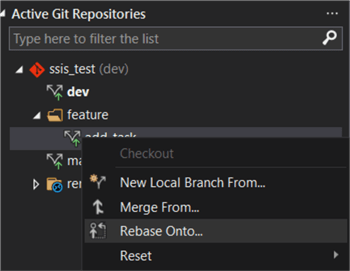 In this three-part tip, we saw how you can use branching in a git repository to work with multiple developers on the same SSIS project. Using branching, developers can work on different tasks without interfering with the work of others. One golden rule is to never work on the same object at the same time. If a conflict does occur, we've shown you how to resolve it.