Temporal tables were introduced in the ANSI SQL 2011 standard and has been released as part of SQL Server 2016.

A system-versioned table allows you to query updated and deleted data, while a normal table can only return the current data. For example, if you update a column value from 5 to 10, you can only retrieve the value 10 in a normal table. A temporal table also allows you to retrieve the old value 5. This is accomplished by keeping a history table. This history table stores the old data together with a start and end data to indicate when the record was active. 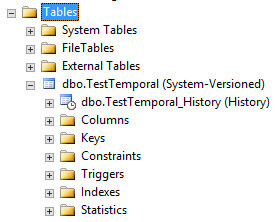 These are the most common use cases for temporal tables:

Temporal tables or system-versioned tables are an example of an assertion table, meaning that it captures the lifetime of a record based on the physical dates the record was removed or updated. Temporal tables currently do not support versioning, meaning the versioning of records based on logical dates. For example, suppose you have a table keeping product prices. If you update the price at 12PM using an UPDATE statement, the temporal table will keep the history of the old price until 12PM of that day. Starting from 12PM, the new price is valid. However, what if the price change was actually meant to start from 1PM (a logical change)? This means you have to time your update statement perfectly in order to make it work and you should have executed the UPDATE statement at 1PM instead of 12PM. The difference between assertion and version tables, and in more general uni- and bi-temporal tables is discussed in the article Conventional, Uni-Temporal and Bi-Temporal Tables.

Note that temporal tables are not a replacement for the change data capture (CDC) feature. CDC uses the transaction log to find the changes and typically those changes are kept for a short period of time (depending on your ETL timeframe). Temporal tables store the actual changes in the history table and they are intended to stay there for a much longer time.

When you want to create a new temporal table, a couple of prerequisites must be met:

There are also some limitations: 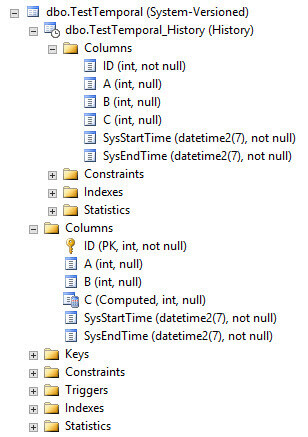 The history table has an identical set of columns, but with all constraints removed. It also has its own set of indexes and statistics. Creating your own indexes such as a clustered columnstore index on the history table can greatly improve performance.

Note it is also possible to enable system-versioning on an existing table. Either you already have an existing history table and you just include it in the ALTER TABLE statement, or you create one yourself. For example, if you have an existing type 2 dimension with all the history, you can create a new table with only the current values. This will become the current table and the dimension will become the history table. There is an optional clause DATA_CONSISTENCY_CHECK that allows you to perform a data consistency check to verify if time periods in the history do not overlap. For more information, take a look at ALTER TABLE.

Let's test the functionality of temporal table by inserting data into the table and then modify it.

Now let's delete one row and update another.

The main table displays the current state of the data:

Note that the SysEndTime column is not necessary, as it only displays the maximum datetime2 value.

The history displays the old versions of the different rows and they are properly dated.

Alter the schema of a system-versioned table

In SQL Server 2016, when system-versioning is enabled on a table, modifications on the table are severely limited. These were the allowed modifications:

All other schema modifications were disallowed. However, in SQL Server 2017 many limitations were removed. Check out Changing the Schema of a System-Versioned Temporal Table for more information. In SQL Server 2016 and 2017 it's still not possible to drop a temporal table while system-versioning is enabled.

But what when you to alter the schema of the table and the modification is not supported? In this case, system-versioning has to be disabled first:

This command will remove system_versioning and turn the main table and the history table into two regular tables. 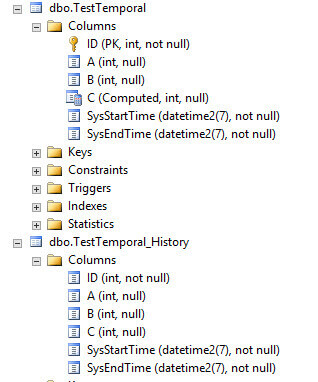 Now you can do any modifications you like on both tables. Make sure they stay in sync and history is still consistent. After the modifications, you can turn system-versioning back on.

Temporal tables are an exciting feature introduced in SQL Server 2016 and expanded in SQL Server 2017. With temporal tables, SQL Server automatically tracks history for the data into a separate history table. Possible use cases are type 2 dimensions in data warehouses, auditing, protection against unwanted deletes and updates and any other example where versioning is required. In a second part of the tip we'll discuss how you can query the temporal table using the new FOR SYSTEM_TIME clause!