Once we have created (or migrated) a temporal table and we have been modifying data for some time, we of course want to view all the historic changes of the data. This tip will explore all of the different methods you can use to view the history.

The following script will create two tables and insert data into it.

The script only creates rows for one product, in order to keep the example simple and easy to understand. This product will have 4 historical versions and 1 current version.

This will directly translate to 4 rows in the history table and 1 row in the main table. Now we will convert those two tables into one temporal table. 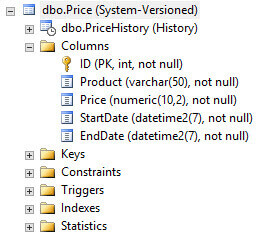 The SELECT ... FROM clause has a new clause in SQL Server 2016: FOR SYSTEM_TIME. This new clause also has 4 new temporal-specific sub-clauses. In the following sections we will discuss each one with an example.

Using the AS OF sub-clause, you retrieve the version for each row that was valid at that specific point in time. Basically it allows you to time travel to a certain point in the past to see what state the table was in at that point.

This query will retrieve the version that was valid on the 4th of July (midnight).

The third version will be returned, which has the price of 1.18.

Note that it's not necessary to know the name of the history table or how the temporal table is constructed. The use of the temporal table is transparent: you just query the table using the FOR SYSTEM_TIME clause and SQL Server handles all the rest. When looking at the actual execution plan, you can see SQL Server unions the main table and the history table together and filters for the requested rows.

What about the edge case where the AS OF point in time falls on a boundary? In other words, the specified point in time is equal to the end date of one version and the start date of the version that comes right after. Let's test it.

This will return the most recent version:

Query FROM A TO B for SQL Server Temporal Table Data

This clause is functionally equivalent to the following construct:

StartDate < B AND EndDate > A

This query will return all versions that were at some point active in the time frame between the 2nd of July and the 6th of July.

What if A and B are the same points in time?

This will be the same as using AS OF. The versions valid on that specific point in time will be returned:

However, the behavior differs from AS OF when the point in time is on a boundary of two versions.

In this case, no records are returned!

BETWEEN A AND B Logic for SQL Server Temporal Tables

This sub-clause is functionally equivalent to the following construct:

StartDate ≤ B AND EndDate > A

In most cases this is also equivalent to FROM A TO B, except when the end date of the time frame (B) falls on a boundary. With BETWEEN A AND B, this boundary will be included. Let's take a look at the same example as in the previous section, but with the range extended to the starting point of the current version. In the example I compared the BETWEEN and the FROM TO sub-clause. 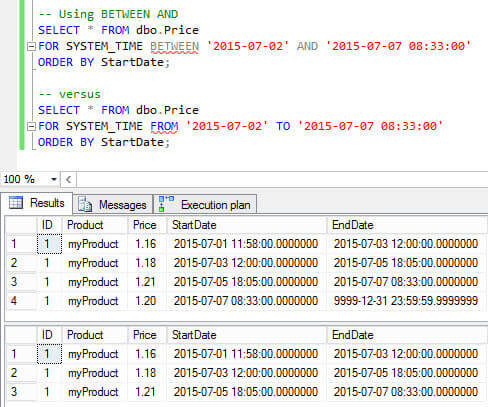 The difference between the two clauses is now very clear: BETWEEN A AND B includes the upper boundary of the time frame, which results in an extra version being returned. When A and B are the same, BETWEEN A AND B is the equivalent of AS OF.

The last sub-clause has the following functional equivalent:

A ≤ StartDate AND EndDate ≤ B

It will only return versions of which the valid timespan is fully within the specified time range, boundaries included. Once a version crosses the boundary of the time range, it is included. Let¡¡¥s use the same example as in the previous sections.

The query will now return only version 3, since it is the only version completely within the start and end point of the range. Version 2 and version 4 cross the boundaries, so they are excluded.

Having A and B the same would be rather pointless, since such a query would only return versions that had a lifetime of exactly one point in time.

The new FOR SYSTEM_TIME clause brings a lot of flexibility to SQL Server 2016 with regard to temporal tables. It has 4 different sub-clauses, each with a slightly different interpretation of how temporal data should be returned, allowing for powerful querying of system-versioned tables. If this new clause is not used in a query, a temporal table will only return the active rows from the main table.