Getting Started with Power BI Designer

Microsoft is offering a new tool called Power BI Designer; what exactly is this tool and what is it used for?

You may or may not have heard of the new tool in the Power BI arsenal called Power BI Designer. This tool was recently released for public beta preview and offers some unifying and amazing features for both end report consumers and designers alike. The tool is designed to put all the Power BI design tools under one BI application.

Getting and Using the Power BI Designer

Getting the designer is easy as the Power BI Designer, preview/beta version, is available for download at: https://powerbi.microsoft.com/downloads. The current beta edition of the software is available free of charge. Microsoft has indicated that the Designer will continue to be free once the Power BI tools go into production / RTM. Of course that could change. 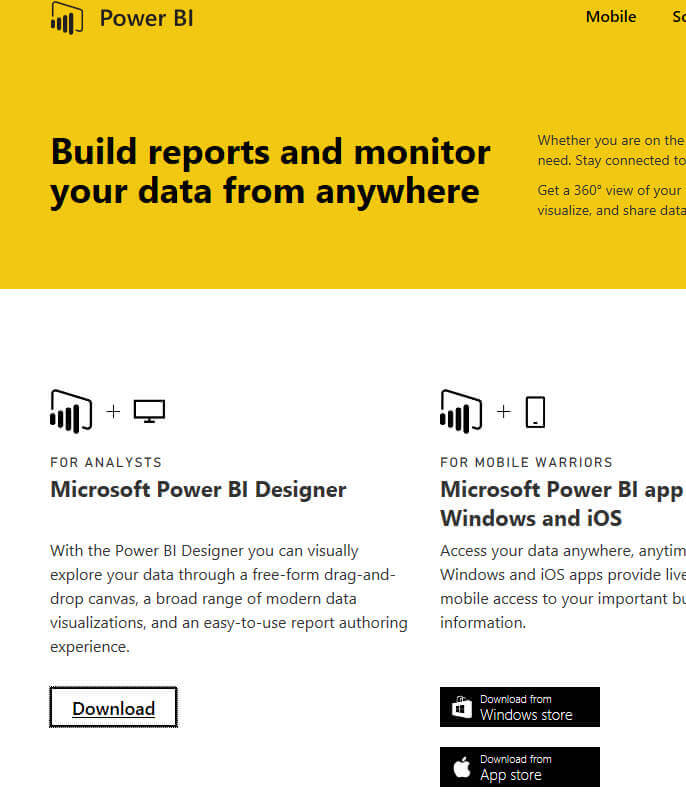 The Power BI Designer (PBID) tool is the accumulation of all the various Business Intelligence tools that Microsoft has developed. Before I go too far I need to warn you that the tool is in preview or beta mode. Sure it works well from my testing, but features are being added and removed every month. Be sure you temper any move to production with the fact the tool set may not scale as anticipated or may plainly just not work. Ok..... So it may not work. Enough said. With all these changes and updates, Microsoft is currently releasing an updated preview about once per month. You can see the latest version information on the Microsoft Power BI Support page at: https://support.powerbi.com/knowledgebase/articles/489224-what-s-new-in-the-latest-power-bi-designer-preview. 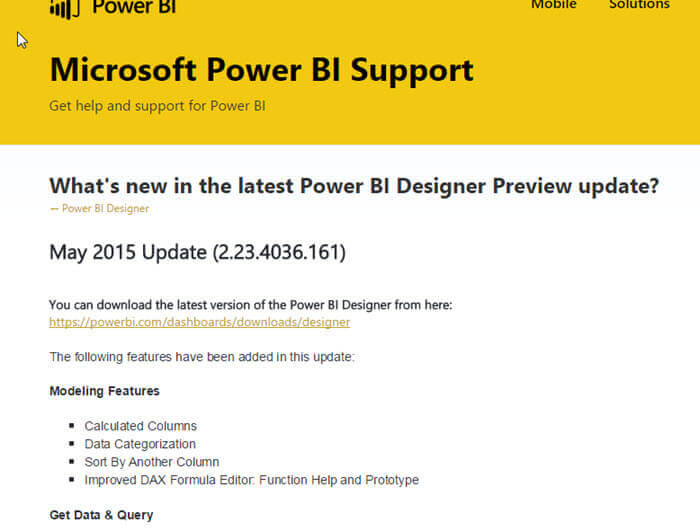 Now on to what designer is and how it is being promoted by Microsoft. You may have noticed that the BI tool set and its related add-ins expanded greatly over the past few years. First you had SSRS and SSAS and even DTS and SSIS as the first generation of BI tools. Then Report Builder came about as the self service BI tool. Next the Power add-ins to Excel surfaced, PowerQuery, PowerView, PowerPivot, and PowerMaps. Then almost as side items, SharePoint and Excel Services also were added to the mix. Finally outside competition from the likes of Tableau, MicroStrategy, and Qlikview enunciated the need for stronger, clearer, and unified dashboard and reporting functionality.

Thus Power BI Designer was born to consolidate many of the Power BI tools under one umbrella tool. So what is the Power BI Designer and what it is not? Power BI Designer (PBID for short), is not an add-in to Excel, but a separate, stand alone application that does not require Excel and can be used by a user who does not even own Excel. PBID incorporates the query features and functionality from PowerQuery with the reporting capabilities of PowerView and PowerPivot. From the information conveyed so far, the tabular model runs under the hood of the PBID application. At the time of this tip's publication, PowerMaps had not been incorporated into PBID; hopefully it will be included soon. Since PBID is separated from Excel, some folks have asked if it is available for other operating systems and platforms. The short answer is currently it is only available for Windows as shown in the system requirements noted below. 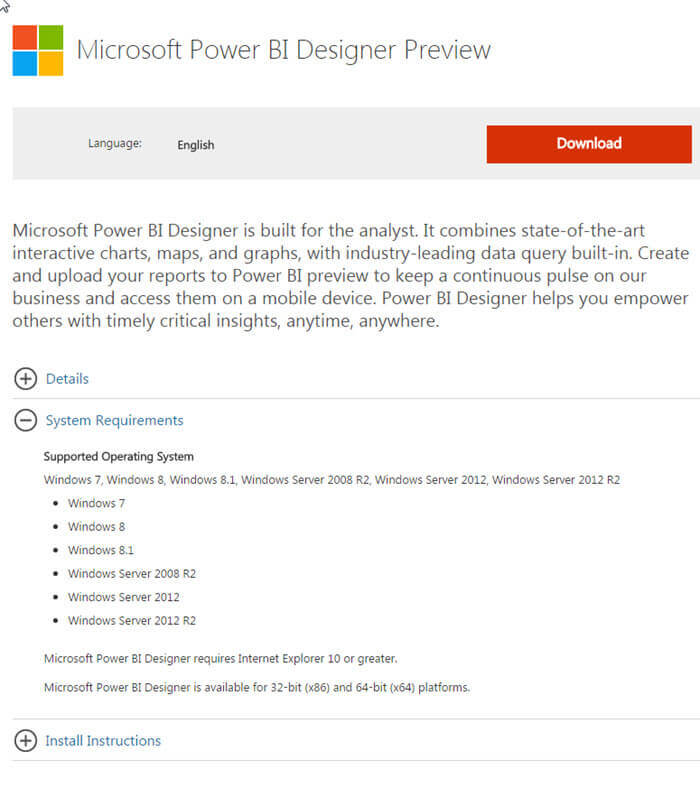 Finally the tool is described as a standalone application where report designers can query data connections (more on connections later), then model, shape, and form the data, and then finally create rich reports and dashboards based on the data. Multiple datasets can be queries and then joined together based on user needs. The tool is designed to be used in conjunction with a Cloud Based service called Power BI Services. Power BI Services allows for the sharing of PBID files and furthermore interacting with reports residing within the cloud service. The BI Services website can be accessed at: https://preview.powerbi.com.

As previously mentioned, currently at the time of this writing, PBID is currently available free of charge. However to integrate and use the Power BI Service, a premium pricing model is used. As you can see in the below illustration, the free version of the tool allows you up to 1GB of data capacity along with a daily "scheduled" data refresh. On the contrary, for $9.99 per user per month, the Power BI Pro version provides 10GB/users of data capacity along with hourly scheduled refreshes of the data. Furthermore, the Pro plan allows for the integration and implementation of collaboration tools and methods along with live interactive connectivity. As you can see, this pricing model looks somewhat similar to the Office365 template. 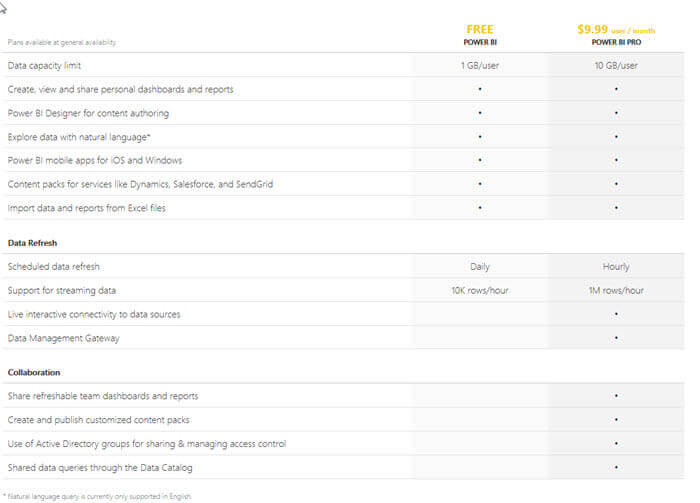 Finally, you may be wondering if it is worth installing the tools based on the data sources that are available to query against. Fortunately, Microsoft has made a definite effort to support many different data source including all those listed below. 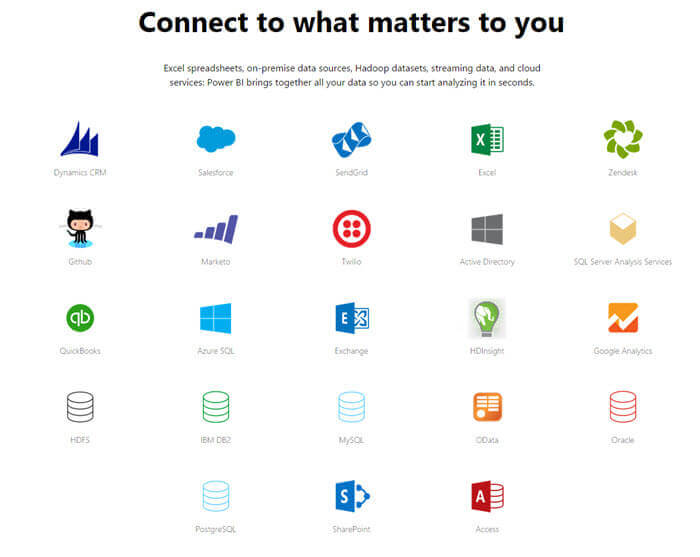 Power BI Designer (PBID) is a new tool available from Microsoft which consolidates many of the current Microsoft BI tools under one application. The tool allows users to connect to a whole sundry of data sources, then to clean and model the data, and finally to create reports and dashboards. Although Microsoft has indicated that PBID will remain free, the product currently is in beta release mode with possible changes in the future. To the contrary, Microsoft is using the freemeium model to sell the companion cloud based storage location, aptly called Power BI Services. BI Services is not required though to use and share locally Power BI Designer files.