I have a table with a couple of columns encrypted using the Always Encrypted feature. When I try to read the data with Integration Services (SSIS), I get an error. How can I solve this issue?

At the time of writing, SQL Server 2016 is still in preview (currently CTP 3.2 has been released). This means functionality or features of the Always Encrypted or Integration Services might change, disappear or be added in the final release.

For an introduction to Always Encrypted, check out the tip SQL Server 2016 Always Encrypted by Aaron Bertrand. This tip explains the feature and also details how to create a column master key and a column encryption key, which will be needed later on.

The AdventureWorks2016CTP3 sample database, which can be downloaded on Codeplex, contains the table Sales.CustomerPII. This table has two encrypted columns: SSN (social security number) and CreditCardNumber. When you try to read the data from the table with a regular connection, you can see that both columns are encrypted because binary data is returned instead of text.

You can only read the encrypted data if the following conditions are met:

To add the connection property, you need to click on Options when creating a new connection in SQL Server Management Studio (SSMS). In the tab Additional Connection Parameters, you can write "column encryption setting=enabled". 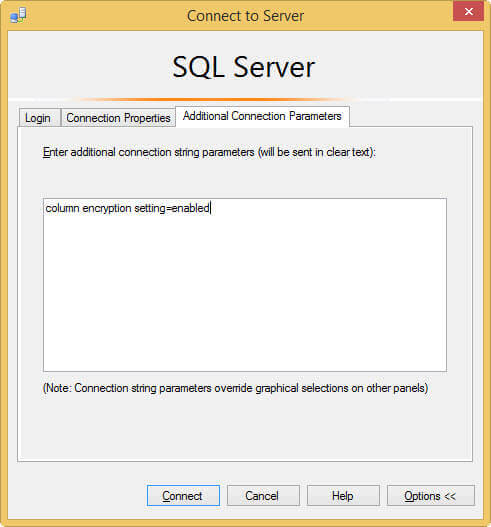 When you now try to read the data, an error is returned instead of data.

When you download the sample database, you can also download an archive with sample scripts. In this archive, there's a directory for Always Encrypted that contains a certificate called AlwaysEncryptedCMK.pfx. When you double click on the certificate, the Certificate Import Wizard is started. At the first screen, you can leave the default 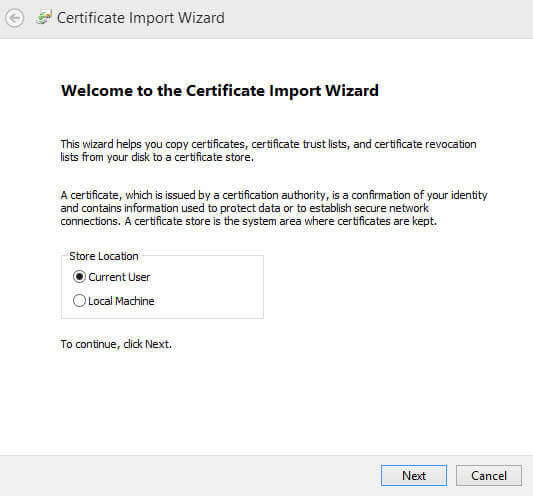 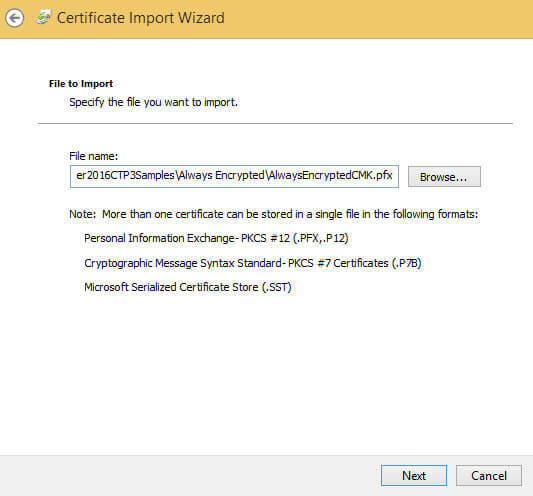 The next screen asks for the password of the private key. It's AlwaysEncrypted. 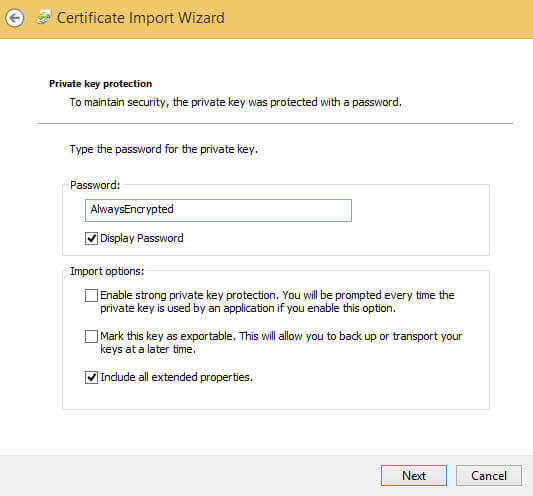 Leave the default for the certificate store: 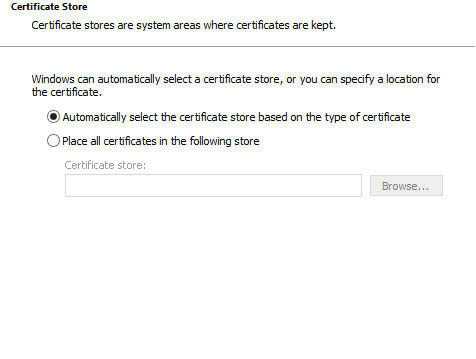 Click Finish to end the wizard and import the certificate. 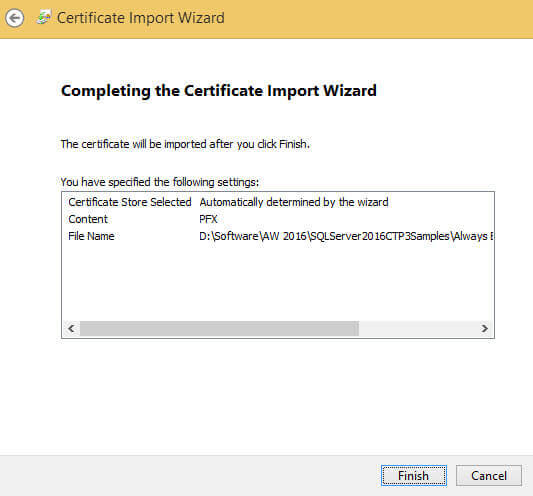 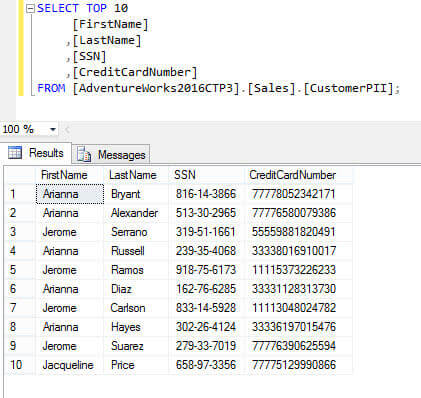 In an SSIS package, reading data from a table with encrypted columns follows the same process as outlined in the previous section. If you don't have the connection property set-up, you can read rows from the table in the preview: 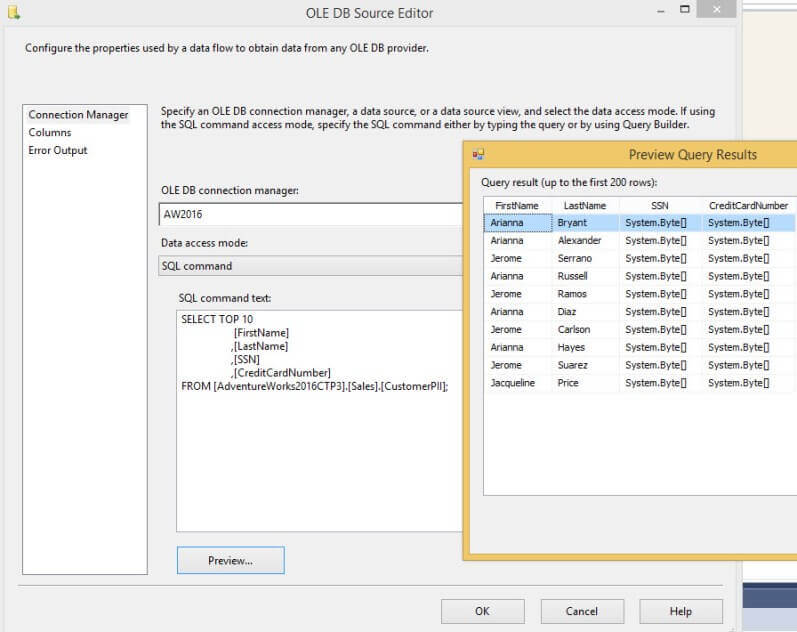 However, for the moment, only ADO.NET connection managers support the additional connection property. If you try to add the property column encryption setting=enabled to an OLE DB connection string, you get the following error:

You can configure an ADO.NET connection manager by clicking on the All tab and setting the property Column Encryption Setting to Enabled. 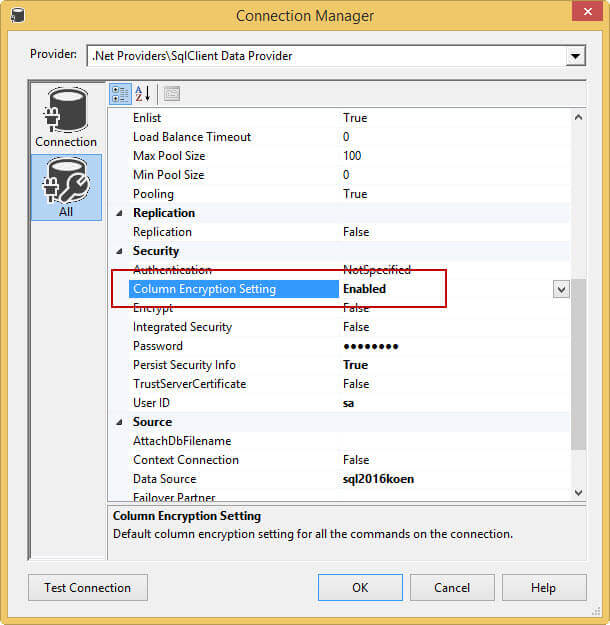 When you run the package now, you get an error that the encrypted data cannot be read just like in SSMS. Even the preview window will show an error. 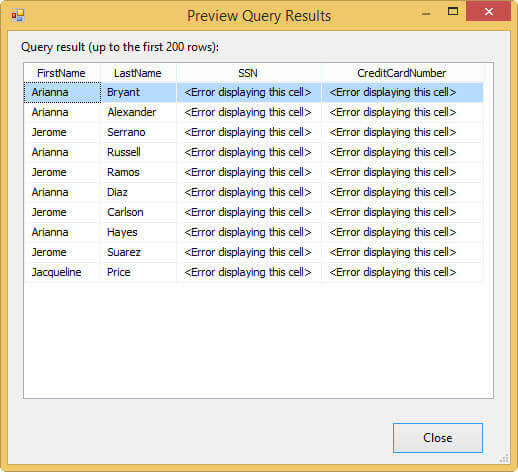 With a few simple steps - setting a connection property and importing a certificate - we can read data from a table encrypted with Always Encrypted. The only downside is that OLE DB connection managers do not support this additional connection property. In a following tip, we'll find out how to write data to an encrypted table with SSIS.