With the upcoming release of SQL Server, Microsoft has decided to expand operating system support to Linux servers. We as Database Administrators need to know how the underlying disks subsystems are performing. Since most of the SQL Server Administrators are not used to work with Linux, you may not know how to do this task. In this tip I will show you some tools that will help you.

One of the duties of a Database Administrator is to ensure that the storage subsystem that supports our databases is performing properly. Of course, we have the I/O Related Dynamic Management Views and Functions like sys.dm_io_pending_io_requests and sys.dm_io_virtual_file_stats, but sometimes that is not enough. In fact, we are used to looking at disk related performance counters on servers running on Windows and even use other tools like the one explained by Ben Snaidero in the following tip: Gather Storage Subsystem Performance Metrics Using the Diskspd Utility for SQL Server Applications.

Now that SQL Server also runs on Linux we must get familiar with the existing tools that will allow us to do our work just like we do on Windows.

This is the most basic command to check for disk I/O and you will generally have it installed by default, but if not you can install the sysstat package that includes the iostat tool.

Basically this command shows CPU and I/O statistics for devices and partitions as two separate reports, but with arguments –c and –d you can force it to only display either the CPU or the devices report respectively. For the purposes of this tip, I will focus the attention to the I/O report. 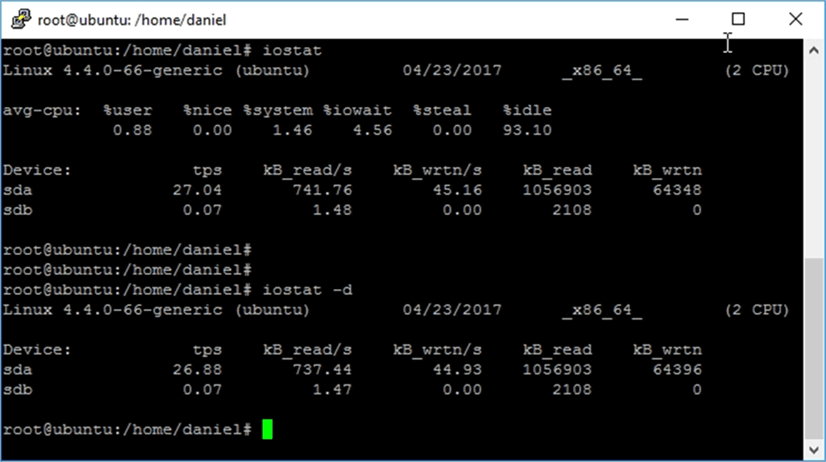 As you can see on the previous image the command shows a table with one row for each installed device and four columns that informs us about the Transfer per Second (tps), reads and writes per second expressed in kilobytes and the amount of kilobytes read and written.

By now we have seen a static picture of our I/O performance, but this command also allows us to keep it running at a specified interval of time (in seconds). When we run iostat with an interval it changes its behavior, and for every run it will show us the delta of reads and writes from the previous execution. The following command shows every four seconds the device usage report until Control + C is pressed.

On the following screen capture is the output of the previous command execution.

But this tool has already more features. When iostat is executed with the –x parameter it returns extended statistics. The most helpful statistics are in the columns avgqu-sz, which is the average queue length; and a wait that refers to the time spent queuing and servicing a request. Below are two screen captures with the output of this command.

On the next table I copied the man page description of each column from the pictures.

This utility displays the I/O usage per process or threads on an interactive grid that resembles the htop utility. 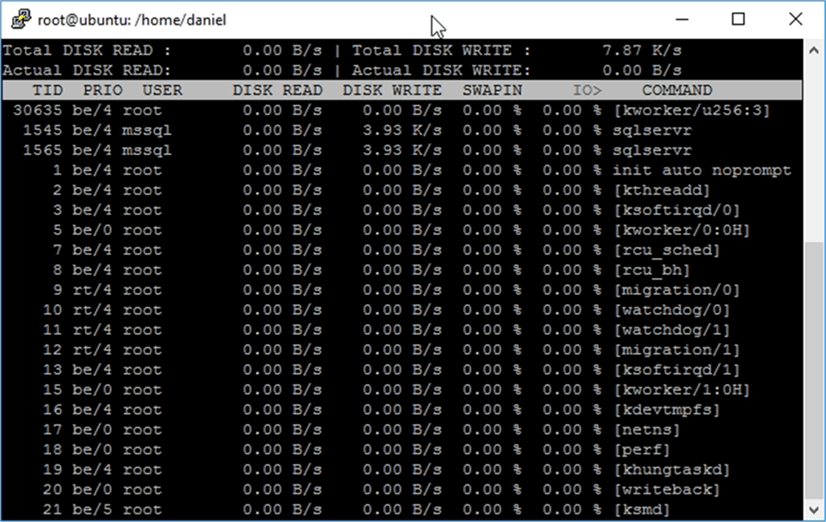 As you can see on the previous image, this utility shows the threads or processes (I will show you how to change amongst the two shortly when I outline its arguments). Most of the columns are self-explanatory, just to mention that the IO column lists the total I/O for each process including disk use and swap; and SwapIn lists the swap activity for each process.

Following is a table with the most used parameters.

But being iotop an interactive utility, there are some keyboard shortcuts that are helpful.