Those of us that have been in the SQL Server world for many years often disregarded sqlcmd. Let’s face it; we are used to graphic user interfaces, like SQL Server Management Studio (SSMS). But now that SQL Server has entered the Linux world we must adapt to use the command line, usually referred to as a shell amongst the Linux community.

We need to get used to seeing more SQL Server instances on Linux in the coming years. Usually production Linux servers do not have a graphical interface and there is no Remote Desktop Connection, so everything is done within a SSH connection.

SQL Server allows three different connection protocols that I will describe later in this tip:

When we connect to a SQL Server instance using SSMS, we just enter the server name in the log in screen, select the authentication method and then connect and then we can start using SSMS.

If we want to use a specific protocol when connecting with SSMS we just need to select the appropriate protocol from a combo box like on the image below. 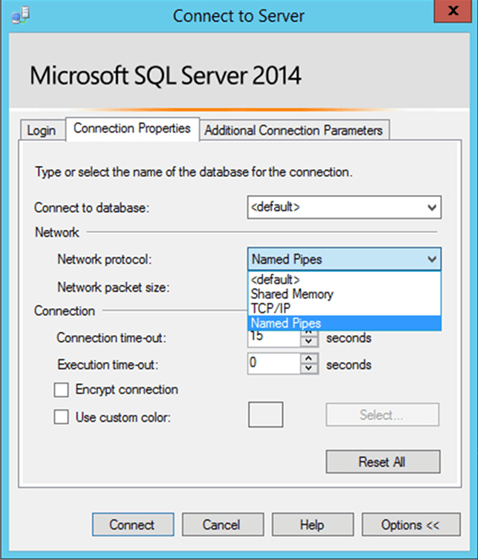 But when we use the console to connect and need to use a specific protocol, we must do this without a combo box.

On the following image I show you my protocol order. But there is something really important! Please realize that there are two Client Configurations. One is for 32 bit applications and the other is for 64 bit applications. This is especially important if you are using SQL Server Integration Services, because you may be using a 32 bit connector, but if the package runs on 64 bit version and you haven’t configured the 64 bit settings, the package will fail. 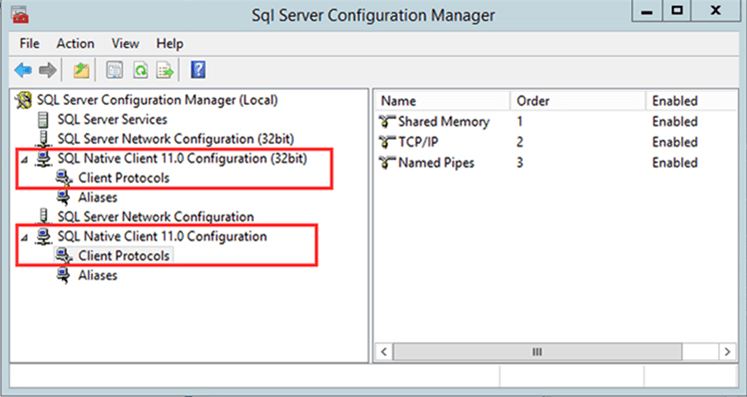 TCP/IP is well known to us. In order to connect to a SQL Server instance using the TCP/IP protocol you need the server’s IP address or the host name and the listening port if your instance doesn’t run on the default port.

We just need to specify the server name or its IP address and in some cases the port number. The following is the general syntax to connect using TCP/IP:

Notice that we add tcp: prior to the server address. I mean, if you just enter an IP address you don’t have a guarantee that you will use the TCP/IP protocol. For example if you want to connect using the TCP/IP protocol to a server named SQL-A using SQL Server’s default instance with Windows Authentication, the syntax will be as follows:

If you want to use SQL Server authentication then you need to specify the user name and password as follows:

When you cannot resolve the host name of the server you should use the IP address instead of the host name. In such case, all the previous commands will look like this assuming 10.10.10.10 is the server’s IP address:

For a named instance (in this case an instance named TEST) the previous commands are as follows:

Also, you may need to specify the listening port. In such case you must specify the port after a comma. For example, suppose that my default instance uses port 1433 and the TEST instance runs on port 51613, then your connection string will be as follows: 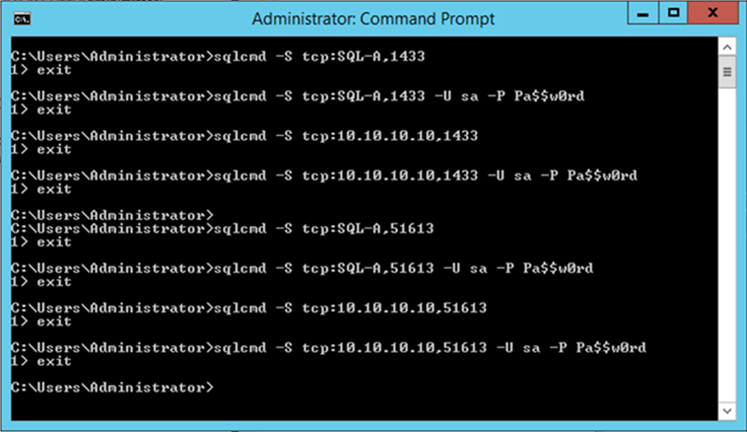 A named pipe is a named, one-way or duplex pipe for communication amongst a server and a client. Internally, all instances of a named pipe have the same pipe name, but they keep their own buffers that allow message-based communication and client impersonation. Named Pipes relies on Inter Process Communication (IPC). There is something to note which is the fact that if you connect to a local instance using Named Pipes, that pipe will run in Kernel mode as a Local Procedure Call (LPC).

The syntax of a named pipe connection for the default instance is as follows:

For example, a named pipe to the default instance of server MYSERVER will be like this:

On the other hand, the syntax for a named instance looks as follows:

As an example, if we want to use a named pipe to the SQL Server instance TEST on server SQL-A, the syntax will be like this:

In the previous section I explained how to build a pipe, now in the following piece of code I will show you the way to connect to a SQL Server default instance and to a named instance using both Windows and SQL Server authentication.

This protocol only can be used when the client connecting runs on the local server. Basically it is a Local Procedure Call (LPC) that runs in Kernel Mode. Also, if we think about the previous explanation of named pipes, we can easily realize that shared memory is a special case of named pipes.

Something to note is that if you are using MDAC 2.8 or earlier, you cannot use the shared memory protocol. If you try to use this protocol, sqlcmd will automatically switch to the named pipes protocol.

If we think about it, the fact that MDAC 2.8 automatically translates shared memory to named pipes makes sense with the idea that shared memory is a special case of a named pipe.

The prefix to use Shared Memory is lpc:. Remember I told you that Shared Memory is a Local Procedure Call. In this case we don’t need to worry about if we are able to resolve the host name, shared memory only works locally and you will always resolve to the local server name.

Find a String in an SQL Database Table