I know SQL Server can run queries in parallel, but how can I tell that a query uses a parallel execution plan and how can I get information about the number of CPUs used when a query executes in parallel? Check out this tip to learn how.

The parallelism concept comes from dividing a big task into smaller tasks, where each small task is assigned to a specific person, or processor in the case of a SQL Server query, to accomplish part of the main task. Finally, the partial results taken from each small task will be combined together into one final result. You can imagine how much faster this can be done and the performance gain that you can get from running multiple serial tasks at the same time in parallel, compared to running one big task serially!

Before going through the tip, it is beneficial to understand a number of technical terms related to the parallelism concept in SQL Server:

The decision of using a parallel plan to execute the query or not depends on multiple factors. For example, SQL Server should be installed on a multi-processor server, the requested number of threads should be available to be satisfied, the Maximum Degree of Parallelism option is not set to 1 and the cost of the query exceeds the previously configured Cost Threshold for Parallelism value.

The aim of this tip, is to retrieve the information of the parallel query threads from the actual execution plan of the query. To force the SQL Server Engine to execute the submitted query using a parallel plan, we will set the Cost Threshold for Parallelism value to 0, to make sure that in all cases the query cost will exceed the Cost Threshold for Parallelism value and we will keep the Maximum Degree of Parallelism option with its default 0 value, to allow the SQL Server Engine to use all available processors while executing our query, that are 4 processors in my machine used for this demo. 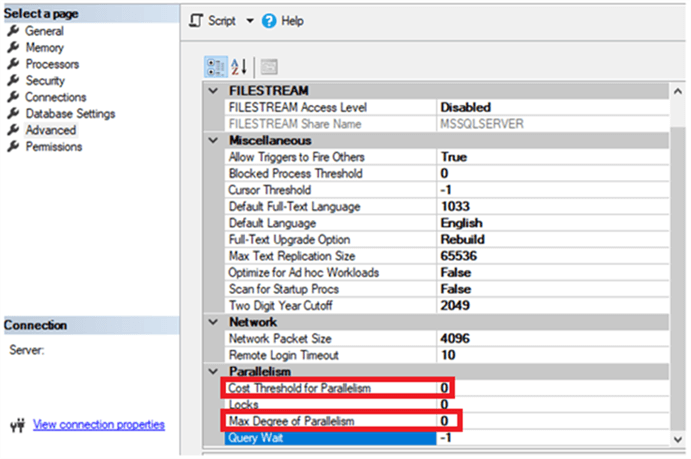 The server is now configured for the demo. Let's create a new table using the CREATE TABLE T-SQL statement as shown below:

Once the table is created, we will fill the table with 100K records using the INSERT INTO statements below:

Now we want to enable the "Include Actual Execution Plan" and then run the below SELECT query:

After this completes running, we can check the execution plan generated from executing the query, you will see that the SQL Server Engine decides to use a parallel plan to execute the query, due to the fact that the cost of that query exceeds the Cost Threshold for Parallelism value.

We can see below that the execution plan is a parallel plan, because of the Parallelism operator and also the yellow circles with two arrows under each operator that executed with parallelism. 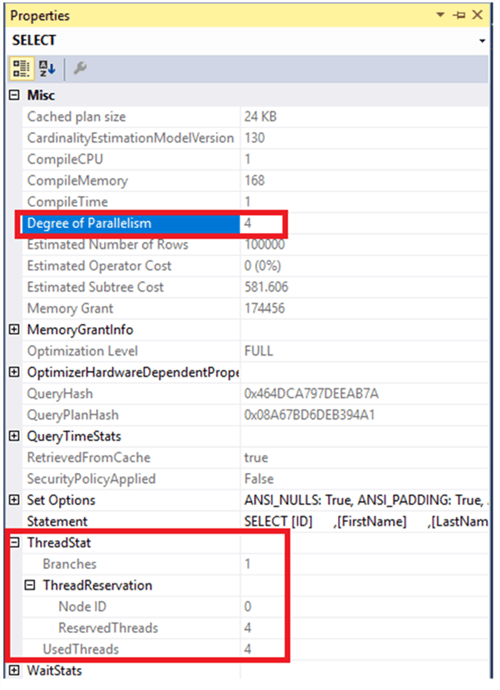 From the Properties window, you can derive that the SQL Server Engine used 4 processors to execute the query. In addition, the query execution plan has one execution path, in which 4 threads are reserved and used to execute the submitted query using a parallel plan.

The same information can also be derived from the XML execution plan, by looking under the ThreadStat section, as shown below: 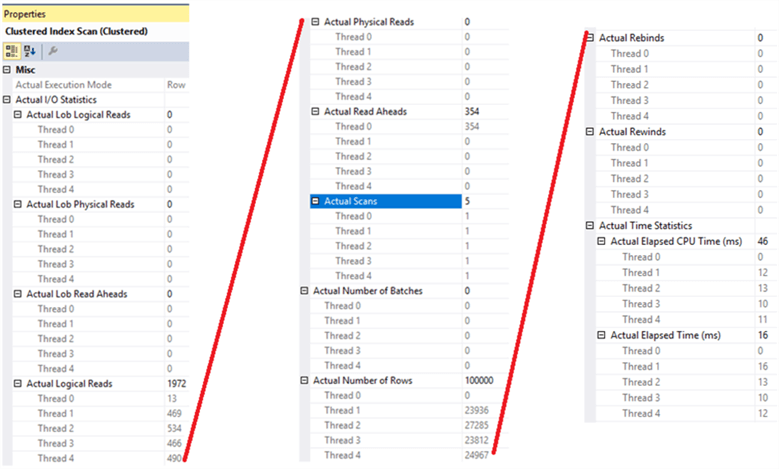 The results match up with the SELECT node Properties window, where there are 4 worker threads that participated in the query tasks execution and one coordinator thread that coordinates between the worker threads. 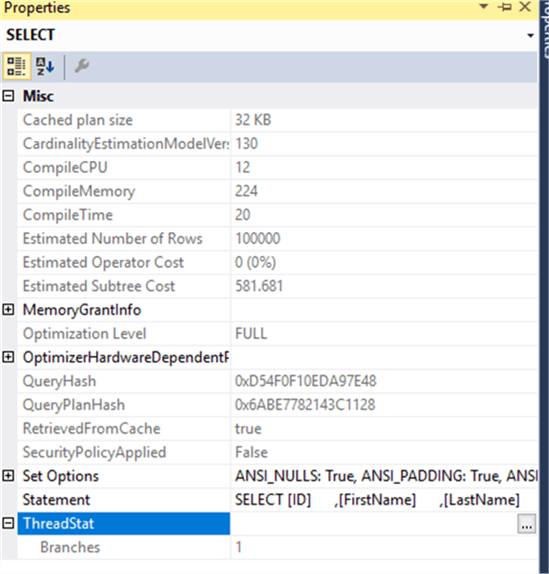 While the query is running, you can simply run the sp_who2 command with the query session ID to get information about the threads that are used to execute the submitted query during the query execution, as shown below:

In the execution plan, each operator in that plan had a number assigned to it and a scheduler that is used to execute it. This information can be retrieved by querying the sys.dm_os_tasks system catalog view and joining it with sys.dm_os_workers and sys.dm_exec_query_profiles system catalog views, as in the T-SQL script below:

Executing the previous script while running the SELECT statement with the Actual Execution Plan enabled, the result will show us that the three plan operators: Sort, Filter and Clustered Index Scan with the ID of each operator shown beside it.  This is executed four times, using the four schedulers. The Parallelism operator with ID equal to 0 will be executed once by the fourth scheduler to connect all execution contexts together in the last step, as shown below: 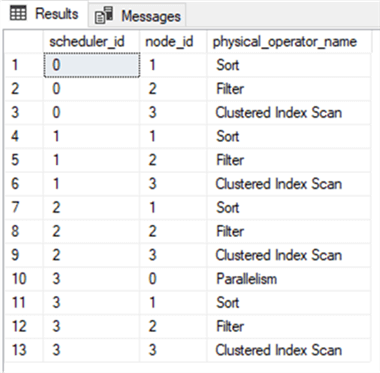 Below I have added the Node values that correspond with the above query results with the execution plan to help further illustrate.

Ahmad Yaseen is a SQL Server DBA with a bachelor’s degree in computer engineering as well as .NET development experience.