In Part 1, Part 2 and Part 3 of this tip series, several benefits of temporal tables were discussed. This is the last tip of this series. In high online transaction processing systems (OLTP), keeping historical data becomes challenging due to the nature of time it takes to write to the disk. But combined with other technologies such as in-memory OLTP, Temporal tables solve this particular problem. Let’s learn about some of the key benefits of using temporal tables with memory optimized tables.

Before we talk about how temporal tables and memory-optimized tables work together, let's get an understanding of Memory-Optimized tables.

The in-memory OLTP feature was introduced with SQL Server 2014 and it has 2 parts; memory-optimized tables and natively complied stored procedures. The main benefit of memory-optimized tables are that rows in the table are read from and written to memory which results in non-blocking transactions at super-fast speed. The second copy of the data is stored on the disk and during database recovery, data is read from the disk-based table. Memory-optimized tables are for specific types of workloads such as high volume OLTP applications. Discussing Memory Optimized Tables (MOT) is beyond the scope of this tip and you can learn more this feature in the Next Steps section. But we will discuss some important points about MOT in our examples.

We will create a test database with one additional filegroup marked for memory optimized objects and will add a data file to it. Then we have to turn the Memory optimization configuration at the database level. Finally, when we create a memory optimized table, we have to define Memory_Optimized = ON. Here is the code we are going to run to setup our example. 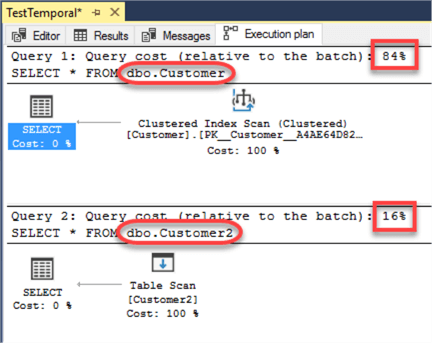 Now let’s make some updates to these 2 temporal tables so we can check out history tables.

Again, execution plans of Update operations on these 2 Temporal tables shows that performance is blazing fast on MOT.

But a query to SELECT data from these 2 history tables: “CustomerHistory” and “Customer2History” does not show any performance difference between the 2 tables. The reason is discussed below. 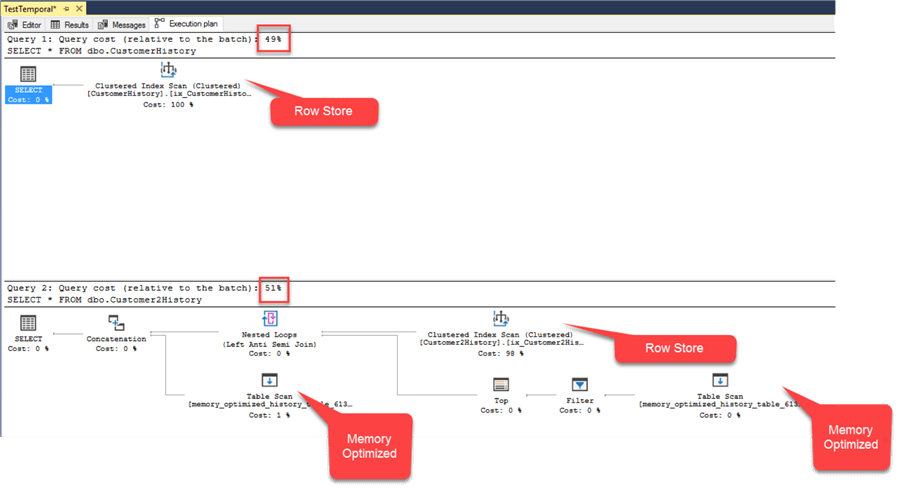 For each Memory optimized temporal table, two history tables get created, one in memory (called staging history table that contains the most recent changes) and other is the disk based (row store) history table with the same history table name that was provided at the time of the temporal table creation. The querying of historical data returns the union of in memory staging table and the disk based (row store) table without duplicates. Data from the internal staging memory table is regularly moved to the disk-based history table by an asynchronous data flush task. According to BOL, the data flush task is activated regularly with a schedule that varies based on the existing workload. With a heavy workload, as frequent as every 5 seconds, and with a light workload, as infrequent as every 1 minute. One thread is spawned for each internal memory-optimized staging table that needs cleanup.

The following figure is from a Microsoft article. This describes the arguments we made in the above paragraph regarding the operation of temporal tables in the in-memory OLTP setup. 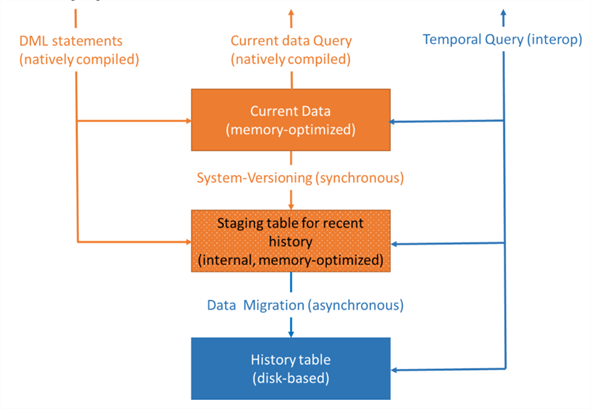 In this tip, we covered how Memory Optimized Table and Temporal Table features can work together to solve the problem of high OLTP applications to be able to store historical audit data efficiently. This is a complex undertaking and although the example discussed in this tip was simplistic, it does convey the potential of the benefits of OLTP applications with temporal tables.