Why Surrogate Keys are Needed for a SQL Server Data Warehouse

If you are not using a special key as a primary key in a dimension, your only option is to include the current business key as a primary key of the dimension table.  In the case of a data warehouse, we are dealing with millions of records which can span decades.  In the case where we have included a natural business key as the primary key of the dimension table, the same key will be included in the fact table. Since data warehouses do not have control over the source systems, it is important to know that the business key can be changed over time due to administrative and operational needs.  When this change occurs, the entire fact table needs to be updated. Mind you, we are taking about millions of records and updates to that many records will have other implications such as the table not being available until the update completes.

Let's look at the below example which is taken from the AdventureWorksDW sample database. In this example, the CutomerKey is the surrogate key in the DimCustomer Table. 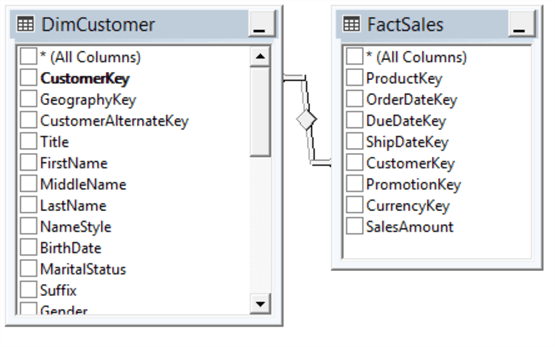 In case CustomerAlternateKey is modified, which is the business key of the Customer dimension, you only have to change the dimension table not the fact tables. Both data changes and data type changes can be handled with this method.

Since we are including a surrogate key, duplicate issues will be fixed as the surrogate key is the primary key in the dimension table.

A dimension table can have records which are not in the source systems.  When fact tables are updated, there can be multiple surrogate keys for one fact table. 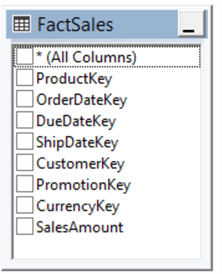 In this fact table, for a given record, the ProductKey, OrderDateKey, DueDateKey, ShipDateKey, CustomerKey, PromotionKey and CurrencyKey are surrogate keys which should be updated. Since data is being received from multiple sources, there can be cases where one or two dimensions are not available. If these are not available, you have to ignore the entire record and foreign key violations will occur. To avoid this, there will be need to be manually entered records in the dimension. Typically, 0 or -1 will be used as a surrogate key which will be tagged in the fact table without violating foreign key constraints.

Provide the Means for Tracking Changes in Dimension Attributes Over Time

This is something where you can’t avoid surrogate keys in dimension tables.  As we know, keeping historical data is essential in a data warehouse. Therefore, dimension changes need to be tracked in the data warehouse.  To facilitate historical tracking in a dimension, type two slowly changing dimensions (SCD) are used. Details of this is item are discussed here.

In type 2 SCDs, a new row is added. If you don’t have the surrogate keys, there is difficulty of adopting the historical tracking in the data warehouse. With surrogate keys, a new record will have a different surrogate key to the previous records.

As we are aware, there are many statuses and flags in OLTP systems. Ideally, these need to be mapped to a dimension table in the data warehouse which will end up with a large number of dimension tables. However, to ease operations, multiple statuses are combined to one junk dimension table. Since this dimension table does not exist, you need to add a primary key which is a surrogate key.

As said multiple times in this article, large volumes of data are used in a data warehouse. Fact tables and dimension tables mainly join via surrogate keys. If those are integer columns, it will be better performing than using character columns.

Explore the Role of Normal Forms in Dimensional Modeling