When you need to update SQL Server data in columns that have data types like VARCHAR(MAX), NVARCHAR(MAX) and VARBINARY(MAX) that contain values like JSON or XML script without have performance issues.

SQL Server 2005 introduced new large value data types to replace the deprecated text, ntext and image data types. These data types can store up to 2^31-1 bytes of data. Updates can be made without rewriting the entire column value, but there is no difference to inserting a large value with a regular INSERT.

To update a large value data type, the UPDATE can use the WRITE clause as follows:

You can see the difference between a regular UPDATE and UPDATE with the WRITE clause.

Using this method can be a good choice and to demonstrate it I’ll create a table with a varchar(max) column data type.

Next, a row is inserted. I'm using a JSON file in this example. You can download the JSON file from here.

We can see how SQL Server saves this data, by running the query below.

The image below shows we are using LOB_DATA pages and we are using 7513 total pages (each page is 8K) to store this data, which is about 60MB.

We can also see this data if we you sp_spaceused on this table.

The next step is clear the plan cache and run a checkpoint to clear the transaction log. Also, we will set statistics io on to get how many pages are needed for the update.

With the function fn_dblog you can check to see that the log is clean.

Before use the WRITE clause, let’s update the column adding text at the end using a regular update.

The statistics io shows the following:

And, let’s take a look at the transaction log again.

We can see there are a lot more rows now. 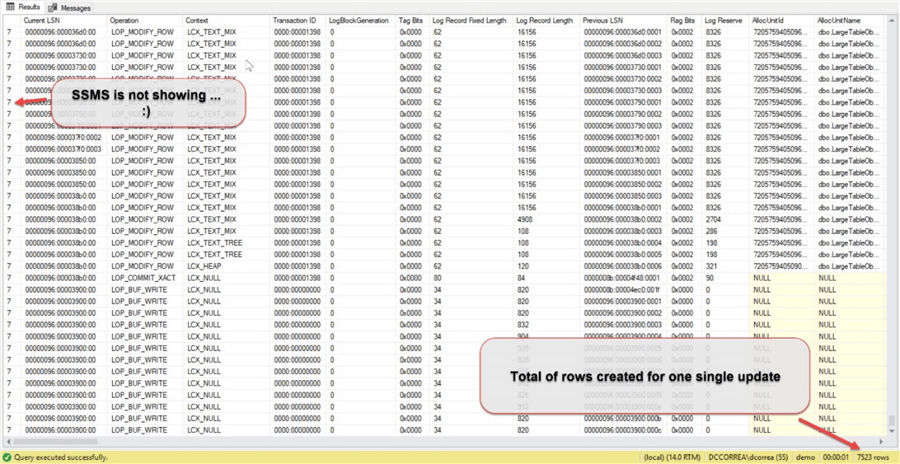 The next step I will use the WRITE clause for the UPDATE, but before that I’ll clean my plan cache and transaction log again.

We will do a similar update as we did above, but use the WRITE clause.

The statistics io for this update is as follows. This is a big difference than the regular update.

We can see there are a lot less rows after the update using the WRITE clause.

If we look at the execution plans for both queries, we can see they almost look the same. But as we saw, there is a lot less activity when using the WRITE clause. 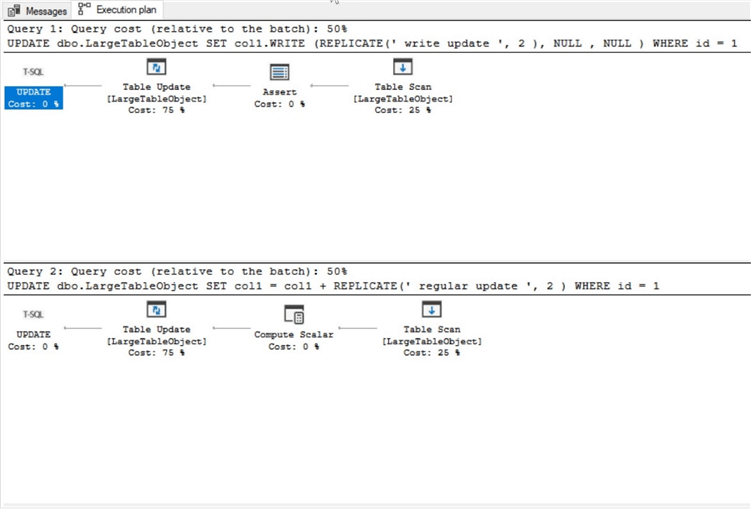 There is a big difference when using WRITE clause and this improvement is a good reason to change the way you update large value data types. The execution plans will not show what’s the better choice, so you need to use set statistics io to get more information.

Douglas Correa is a database professional, focused on tuning, high-availability and infrastructure.