We use databases to store information in tables. Once the data is written to those tables, often the need arises to update certain fields during the lifetime of the data. In the SQL language, we can use the UPDATE statement to achieve this goal. In this tutorial we cover several different examples of how to use the UPDATE statement.

In this tip, we'll show you how you can use the T-SQL UPDATE statement to update data in a database table. We'll be using the AdventureWorks 2017 sample SQL database. If you want to follow along, you can download the sample database and restore it on your system. You can copy paste the queries and execute them on your machine using Microsoft SQL Server Management Studio (SSMS).

A simple UPDATE statement can take the following format:

This will set all the rows of the existing data for the column SickLeaveHours in the Employee table to the value 0. You can also use an expression that references the column itself. In this example, we're enhancing the VacationHours column with 10%.

When the UPDATE statement is executed, SQL Server will take the current value of each row and multiply it with 1.1. The result will be stored in the column. When you execute the statement in SSMS, the messages tab will display how many rows were updated by the statement:

You can also update multiple columns at once, by separating the columns with a comma. In this statement, we also update the ModifiedDate column of the table:

It's possible to reference columns of the same table, while they are being updated as well. Let's say for example we are resetting all vacation hours to zero. At the same time, the sick leave hours are updated based on the current value of the vacation hours.

If SQL Server would update the VacationHours column first, you might assume that the SickLeaveHours column will also contain only zeroes, based on the expression (for more info about IIF and CASE, check out the tip SQL Server T-SQL CASE Examples). This is not the case though, the database engine updates both columns simultaneously, so the expression for the sick leave hours uses the values that were present in the VacationHours column before the UPDATE statement.

Updating a Subset of Rows

In many cases, you don't want to update the entire table, but only certain rows. You can accomplish this by adding a WHERE clause to your UPDATE statement.

Every row where the WHERE condition returns true will be updated; other rows will simply be skipped. The principle is the same as a WHERE condition in a SELECT statement (for more info, see the tip SQL Server SELECT Examples). We can for example update the sick hours only if they're smaller than 10 (instead of using the IIF function as we did in the previous example):

In general, it's a best practice to restrict the rows you want to update, for performance reasons but also to avoid overwriting data that shouldn't have been updated. When running an UPDATE query on a production server, you don't want to forget your WHERE clause.

Updating a Single Table with Data from Multiple Tables

In the previous section, the new column values were either hardcoded or we used expressions on the columns of the table itself. It's also possible to use data from other tables as well. We can do this by adding the FROM clause to the UPDATE statement. We can join the table we want to update with the other tables, and then we can use the columns of those other tables to update the original table. A skeleton query could look like this:

In this example, we are giving our recently hired employees two extra days of vacation. We can do this by joining the Employee table with the JobCandidate table.

No WHERE clause is needed, as the INNER JOIN already filters the data we need for the query. In some cases, where the logic becomes more complex, you might need to resort to subqueries or common table expressions (CTE). For example, the following query returns an error since you cannot directly aggregate in the SET list of the UPDATE statement.

To work around this issue, a CTE can be used to pre-calculate the aggregate:

Since you'll be overwriting data, you might want to make sure the UPDATE statement does what it is intended to do. There are two options for quick testing:

With the first option, you surround the UPDATE query with an explicit transaction:

Using the query from the previous example, we get this script:

To test this, we run this part first: 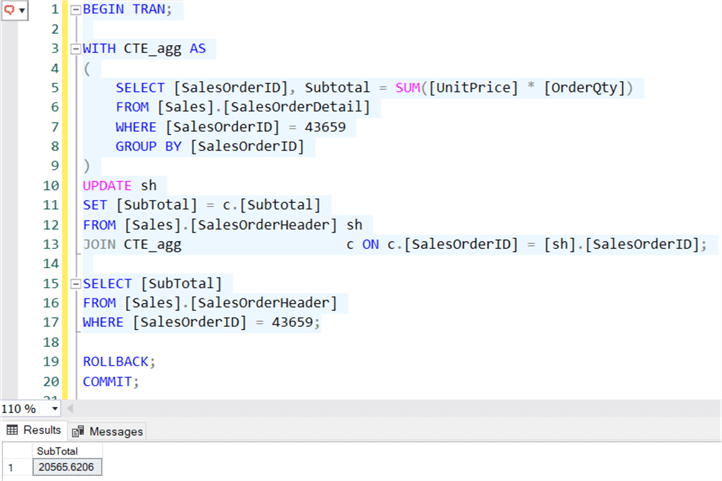 If the result is what we expect, the COMMIT statement can be executed, otherwise we select ROLLBACK and execute that line of code. As long as neither of those statements is run, the transaction is open and the changed data is not persisted. More info can be found in What is a transaction?.

The other option is to insert a SELECT into the UPDATE statement and "hide" it using comments. To test the query, we select only the relevant portion to see the data that is going to be changed. For example:

To test this query, we select everything right after the double dash and execute it:

With this trick, you can quickly inspect which rows are going to be updated, as long as the UPDATE statement has a FROM clause.

In all of the examples we have used physical tables to update. But SQL Server also allows you to update data through a view. There are a couple of prerequisites to have an updateable view:

You can find more info on the prerequisites in the documentation. To illustrate with an example, we're going to use the HumanResources.vEmployee view of the Adventure Works database. This view has the following definition which is based on a SELECT query:

As you can see, the view adheres to the prerequisites. This means we can run the following UPDATE statement:

We can indeed see the data has changed:

The prerequisites mention a single base table, but the view has several tables joined together using INNER JOINs. This means you can also update columns from other tables, such as the Person.Address table for example.