In case you don't have Docker installed already on your laptop, please check this simple guide on how to install the CE edition of Docker for macOS. The guide also contains detailed information about system prerequisites and basic operations.

Check to see if Docker daemon is running

Once Docker is installed, let's make sure Docker's daemon is running. As you may guess, there are multiple ways to do this, but I will include a few in this tip.

Let's start using a graphical tool like Mac Activity Monitoring. In order to open this tool, use the "Spotlight" search at the top right of the status bar:

Please note, the "Spotlight" option will not appear in your status bar if you disable it, you can put it back by enabling it using this guide. In case you want to use the shortcut, try Command (or Cmd) ⌘ + Space bar.

Chose the Activity Monitoring icon from the list. Activity monitor, will display every single process running in your mac machine, but I'm interested in information about the "Docker" processes, so I typed "Docker" in the search textbox to filter the results as shown below:

Noticed I highlighted the PID column, the main Docker process is the one with the 5482 ID. We will check that later using the terminal.

Another way to make sure docker is running is checking the desktop top status bar, click on the docker icon and look for the current status as shown below: 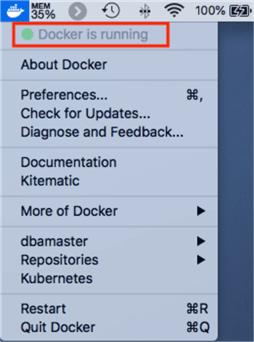 Finally using the terminal, this is by far the easier and faster way to check. Look for the terminal application exactly the same way I looked for Activity Monitor using spotlight and type the following command "ps -ef | grep Docker" as shown below:

The "ps" command displays all the processes running on the host machine, then I use the "|" pipe command to filter the output of the whole list of processes looking only for "Docker". Look at the highlighted information, the process ID 5584 was listed as well so with that I can confirm the information displayed on the GUI and by the terminal is the same and docker is for sure running on my host machine.

There is also another alternative using one of the Docker commands, we can use the "ps" docker command to list all the containers running and their respective status:

Let's focus on Docker now that we know it's installed and running. First, we have to choose the docker image we want to download, in this tip I will focus on SQL Server 2019 CTP 2.2, but we can explore the list of available images in Microsoft Docker hub for SQL Server: 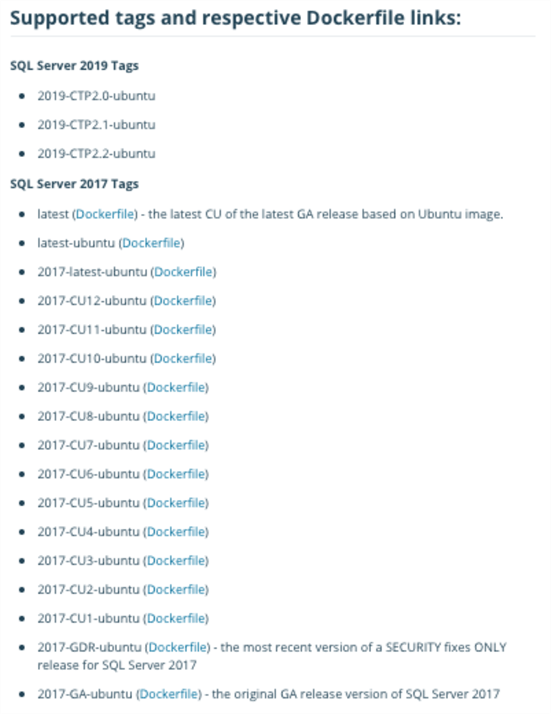 Please note that Microsoft now has two options for Linux containers. The traditional Ubuntu version and now the new RHEL version, which I will use during the explanation of this tip.

The reason why I chose the RHEL version is simple, I consider RedHat a more robust and enterprise type distribution. I consider Ubuntu, an everyday use distribution that doesn't have the rich administration tools like RedHat has out of the box.

In order to download the latest SQL Server 2019 image, you have to pull the image from Microsoft's repository. This image contains SQL Server 2019 pre-installed on RHEL and ready to use.

Once the download starts, Docker will ask for your account prior to start the download. Once it's complete it should show the message "Pull complete" and an ID will be assigned to the image.

Now, that the Linux container image was downloaded to the local machine it's time to start a new container with the image previously downloaded.

In order to start the container, I will use the Docker command "run", combined with multiple options that I will explain later in this tip:

*Please note, the "\" symbol is used only to break out lines and make the text more readable.

Let's review in detail each parameter I used to start this container:

At this point, I have successfully created the container using the RHEL SQL Server 2019 image.

Now it's time to learn how to manage the image. The following section will use the built-in macOS terminal, please make sure to follow the instructions I explained at the beginning of this tip on how to open this application.

How to check the container status

The simplest way to check the status of any container is using the docker "ps" command:

Noticed I used the "-a" parameter, which will display the entire list of containers deployed on this docker instance, it also displays the associated image and status (running \ stopped).

Now, imagine you want to know the list of containers where the status is running:

The filter command can be extended to all the possible container statuses as:

How to stop container

Remember the importance of choosing a comprehensive name for the container? This parameter uses the name we passed as the parameter when starting the container, it is easier to use that name than the one randomly generated when no parameter is passed.

In order to stop the container, you must combine the "stop" docker command with the container name as follows:

How to start container

In order to start the container, you must combine the "start" docker command with the container name as follows:

How to connect to SQL Server inside the container

Ok, so we learned the basics of how to stop and start the container, but what about managing the container image from the inside? In order to achieve this, we need to use the "exec" docker command and use the "-I" parameter that means interactive. This command can be also combined with the "-t" parameter which means "tty" as any devices that acts like teletype in a terminal.

As you can see above, I was able to connect and check the version for the container image OS in this case it's a RHEL 7.5.

Let's connect to SQL Server through SQLCMD and let's find out the SQL Server version:

Now we have a fully functional SQL Server 2019 CTP 2.2 running on RedHat Linux which can be used as a temporary sandbox and discarded afterwards.

Carlos Robles is Data Platform MVP and multi-platform DBA with +10 years of experience in database technologies.