I've heard implicit conversions in T-SQL code are bad for SQL Server performance, but I don't understand how and when they occur. I also don't know how to detect if they are occurring in my SQL Server queries. Can you explain what they are and how I might spot them?

And if we look at the generated execution plan, we'll see that we end up with a clustered index scan and a compute scalar as well as a filter operator:

Compare that with this query that functionally does the same thing:

When we view its execution plan, we still see the clustered index scan, but we don't see the other two operators:

When we do a comparison of the cost, the conversion in this case doesn't generate a lot of overhead. However, a lot of 6% performance overheads add up. We're also talking about a relatively simple query. Needless to say, we want to avoid implicit conversions.

Let's look at the following query, which is for any of the more recent SQL Server versions of the AdventureWorks database:

At first glance, we don't see any cause for concern with request to the query. However, if we were to look at the data type for CardNumber, we'd find that it's actually an nvarchar data type. Therefore, SQL Server is going to perform a conversion:

Or does it? We don't see the compute scalar and filter operators like we did with the sql_variant example. We actually have to look at the information with respect to the nonclustered index scan itself. If you hover over the Index Scan operator, the following will display: 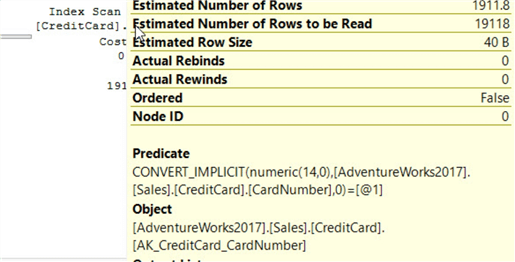 There's the implicit conversion! A clue that something like that was happening is the fact that the operator was an index scan, not a seek. We would expect that there would be an index on CardNumber, given how we typically ask for data. So to have a scan instead of a seek would indicate that there was probably a Row-By-Agonizing-Row (RBAR) operation going on. Once we looked at the details of the scan operator, we can see that's exactly what occurred.

Note also that the operator information tells us that instead of processing 1,911 rows, we only processed 1. That's what we'd expect. That simple change to our query resulted in a completely different execution plan and far fewer rows than the implicit conversion.

This is the best way to handle when you find cases where SQL Server is performing an implicit conversion. Determine what explicit conversion you can do instead. Then, figure out which is the least costly in the general case. Here, the answer was quite simple as there was only one conversion to perform and it was on the scalar value. More complex queries will likely require a bit more work.

Is there any easy way to detect when implicit conversions are occurring? We can use Extended Events, but it's not going to catch every case. We can set up Extended Events which fire if there's a performance issue detected. Here's an example where we're writing to a ring buffer as a target. If you need to capture over time, you'd want to use a different target:

As you might guess, this was simply scripted. If you're setting up for yourself, here's the setting you'll want to add:

This extended event will include a lot of noise. That's because any use of SSMS or like clients issue queries which produce implicit conversions as well, especially as they query the various catalog views. Therefore, you may have to export the XML and search for the specific object names. Here's an example where we see the implicit conversion from the sql_variant example before: 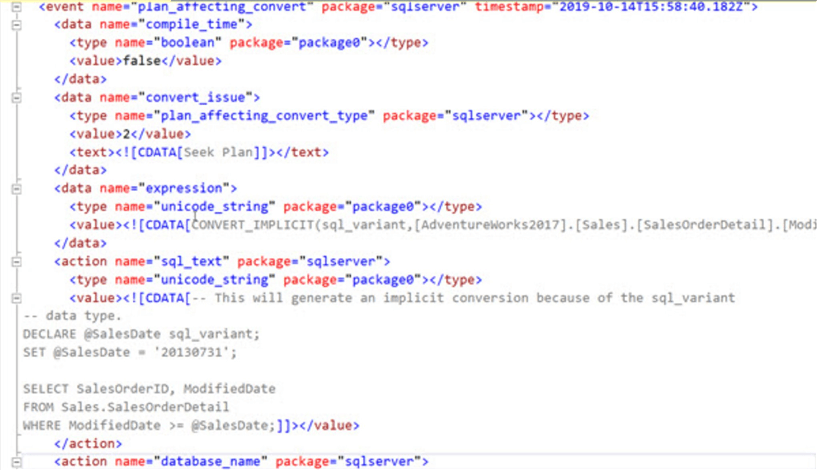