There are multiple settings that you tend to change immediately after installing or upgrading an instance of SQL Server, but they require manual steps after setup, and often require a restart of the service to take effect. Often it would be nice if there were a way to override these options before installation has completed, not only to avoid the restart, but also to ensure that none of these changes could be forgotten.

With each new version of SQL Server, more options are added to setup, for both the interactive UI and the command line. In this tip, I wanted to highlight what I think are the most important changes coming in SQL Server 2019, and tell you about my wishlist for future versions.

One of the long-standing defaults in SQL Server has been the maximum degree of parallelism (MAXDOP), which has always been 0, meaning use (up to) all cores when the engine believes that will help. For many OLTP workloads, 0 is not the optimal setting, and you may want to use a different number depending on the behavior of your workload. I don't want to belabor the thought process here, but this will be based on settings like the number of cores exposed to SQL Server, whether they are divided into NUMA nodes, and if there are other instances, applications, or services running on the same Windows Server. Microsoft's guidelines are published here.

In SQL Server 2019, there is a new command-line argument, /SQLMAXDOP, allowing you to specify this value for automated installs. If you don't use this parameter, the default will be derived according to the guidelines published by Microsoft. At the time of writing, for posterity, these are as follows:

There is also a new tab in interactive setup, on the Database Engine Configuration screen, called MAXDOP. You can see that, on my quad-core virtual machine, the recommendation is to use MAXDOP of 4: 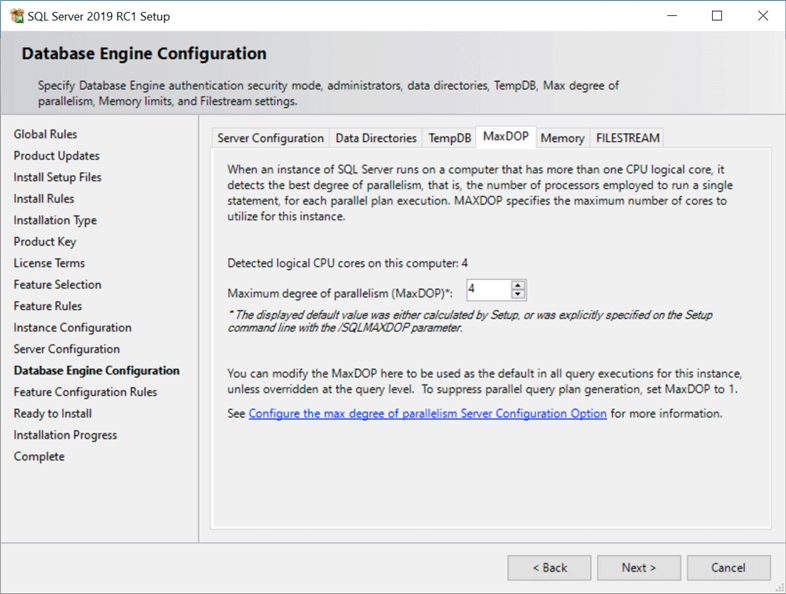 There is a lot of additional context provided on this screen, including a link to those same published guidelines.

Another long-standing pair of options that often have to get changed after setup – especially when an instance shares a host's resources with other instances or applications – are the min and max settings for server memory. The default has been 0 and 2 petabytes, respectively, for many versions now, and these settings have only added to the confusion of how memory management works in SQL Server. As with MAXDOP, Microsoft publishes guidelines about overriding the defaults. Again, for posterity, the core of the recommendation for max server memory is currently as follows:

This is a little more convoluted than MAXDOP, and you should fully invest in understanding the options before overriding the defaults.

In SQL Server 2019, there are now two different ways you can override the defaults:

These options are also exposed in the interactive component of setup, on a new Database Engine Configuration tab called Memory. On this machine, setup recommended just under 6 GB for max server memory, which seems roughly consistent with the guidelines for a VM with 8 GB of memory: 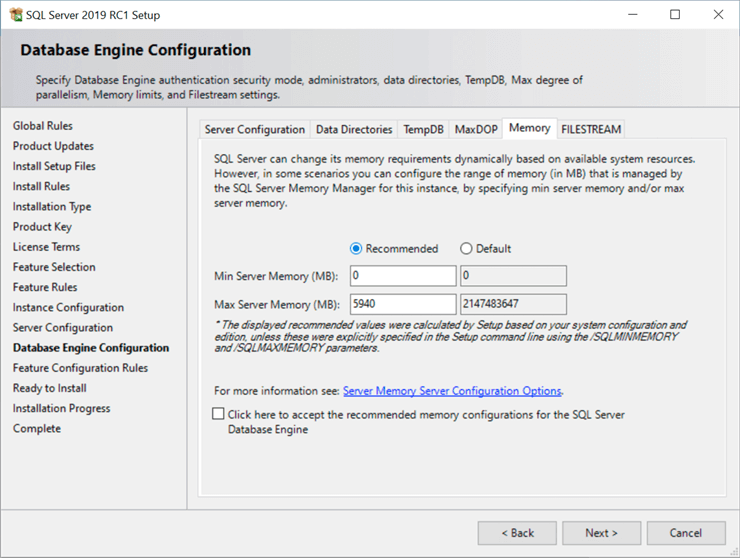 There is a lot of helpful context here, too, including a link to the published guidelines. Note that I can override either value in the Recommended column, or check the box below that basically says, "I don't want to think about it; why don't you come up with the best recommendation for me?"

These are great additions to setup, after they added instant file initialization and sensible and myth-busting tempdb file recommendations in SQL Server 2016. There are a few other settings that I'd love to see considered at some point:

What's New in the First Public CTP of SQL Server 2019