As a SQL Server database developer, I need to understand the concept of stashing database code changes along with its application in real-time scenarios.

The Git stash code feature can help developers to be more productive by maintaining the standards of database/application coding and complying with source control best practices.

About the Git Stash Code Feature

The Git stash feature in Visual Studio 2019 can revolutionize the way developers (including database developers) work with source code branches (in Visual Studio) particularly in the context of the most widely used Git source control.

It actually allows the database developers to switch from one branch to another to focus on the piece of code they need to without mixing it with another work item.

In order to understand Git stash code changes, let us first review one of the main concepts of working with source control regarding master and dev branch.

We know that no database changes should be directly committed (saved) to the master branch since master is treated as the production branch so it must remain very stable.

The database developers should always work on branches other than master to create new database objects or modify existing ones to meet business specifications. In either case the new work should not be directly performed on the master branch as per standard source control best practices.

The key is to work on any branch other than master such as dev and then create a pull request, also known as integration request, to merge your changes from the dev branch with the master branch once all looks accurate.

Please refer to the article SQL Database Project Code Branching in Git to see a walkthrough of the whole scenario where a dev branch gets merged with master branch once the new work is ready to be integrated.

Keeping in mind that no database changes should be performed directly on the master branch, here are two of the most productive uses of the Git Stash feature in Visual Studio 2019:

Let us now understand how Git stash database code works with the help a walkthrough based on a real-world scenario.

This tip assumes the readers are familiar with the following:

Please note that this tip works with Visual Studio 2019.

Let us begin by creating an Azure DevOps Project and name it Git Stash Database Code as follows: 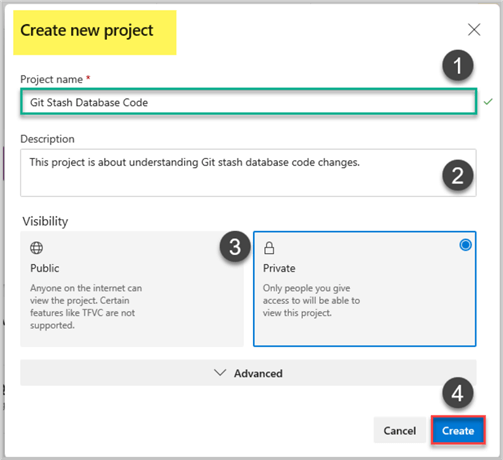 Navigate to the project properties and shorten the name of your project repository (repo) by renaming it as git-stash-database. 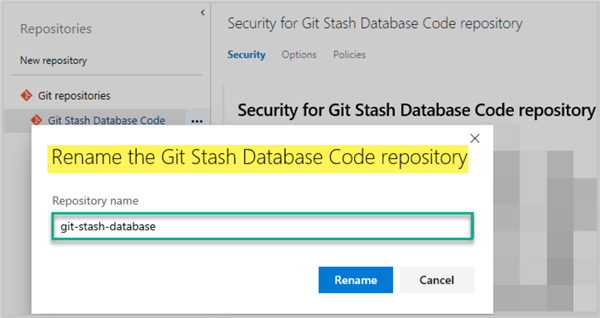 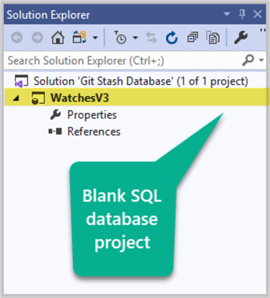 Create another table called WatchOrder under the same Tables folder as follows:

The project should look as follows now: 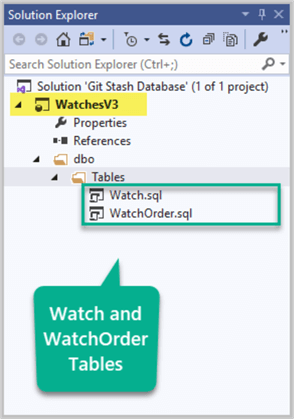 We have to put the project under source control now.

Click Add to Source Control or press CTRL+ALT+F9 and then click Git at the bottom right side of the Visual Studio status bar: 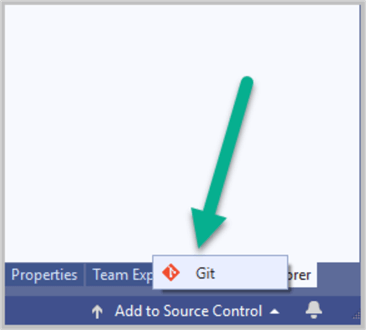 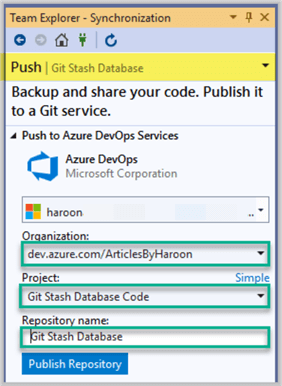 Click Publish Repository to push all the changes directly to the master branch:

Go to Azure DevOps on the web to see the repository Git Stash Database: 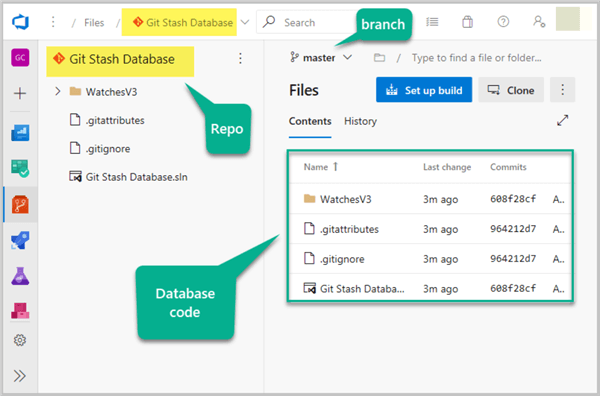 No code should be directly saved to the master branch as per standard practices.

The reason we directly pushed changes to the master branch is to quickly mock up the following scenario:

Please refer to the tip SQL Database Project Code Branching in Git to see the above in action.

Add a SQL View to the master branch

A new requirement is to add a SQL view by the development team.

Now assume that the database developer working on this project got so occupied that he/she forgot to switch to any other branch when meeting the new requirements to create a SQL view. 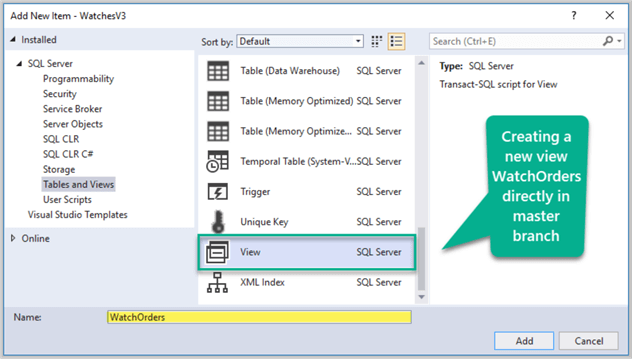 The project is shown below: 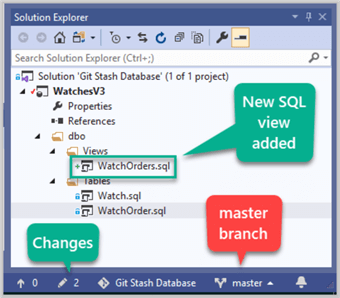 So, the solution is to stash the changes to be picked up by another branch preserving the master branch which is production code. 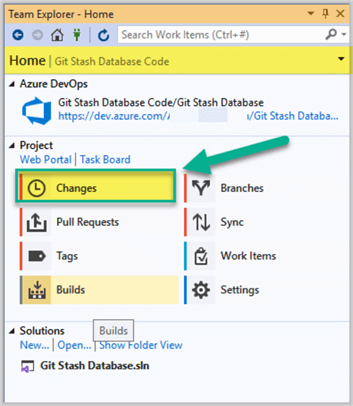 Add comments and Click Stash All under Stash as shown below: 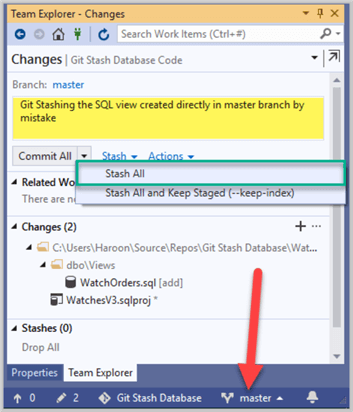 All the changes previously associated with master branch are gone now and have been stashed: 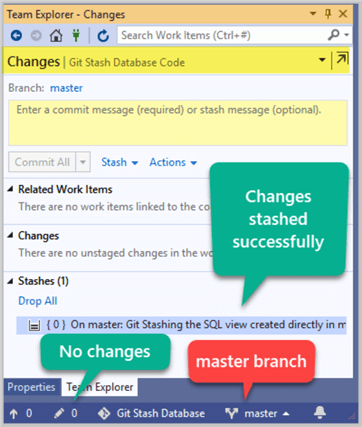 Create a new dev branch from master as shown below: 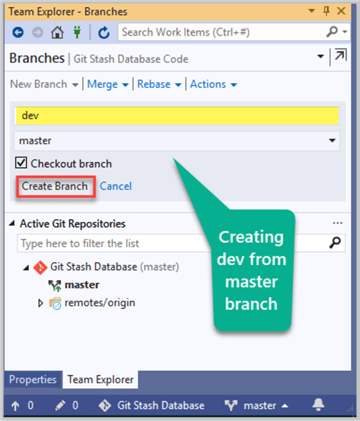 Once the dev from master branch is created you are going to be switched to the dev branch.

Click Pop and then click Pop and Restore Staged in Changes section of Team Explorer to restore the parked changes to the dev branch to be checked in. 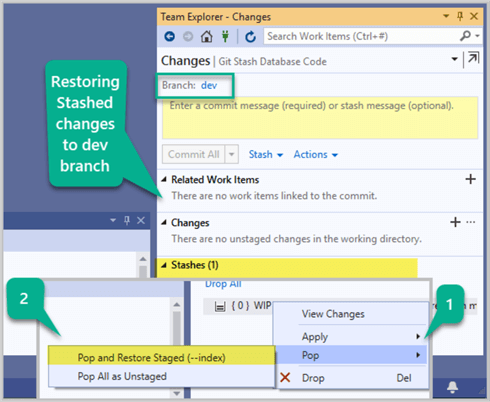 Next, add comments and push the restored stashed changes to the dev branch: 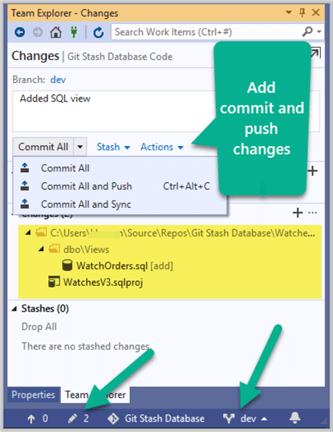 The changes are pushed successfully to the dev branch.

Now switch to master branch to check if SQL view is still there or not: 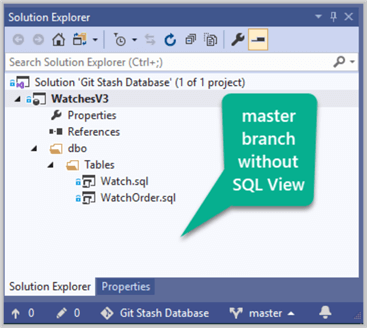 There is no SQL view in the master branch which means we have successfully stashed the database changes and restored them to the dev branch by preventing accidental direct changes to the mater branch.

Congratulations, you have successfully stashed direct database code changes from master branch and restored it to another branch by preserving the reliability of the master branch which serves as the production ready branch.