In SQL Server, when one session holds locks on a particular resource such as a table, row or key and a second session needs to obtain locks on the same resource, the second session may need to wait for the first session to release the needed locks before proceeding with the process. Depending on how long the wait is for the locks to be acquired for the second session, there might be a blocking chain between these two processes. In this tip, I will explain the use of lock_timeout to minimize blocking.

Blocking is a normal characteristic of a relational database engine and SQL Server blocking happens for lock-based concurrency. In simple terms, one session acquires and holds a lock on a specific resource for its processing and a second session attempts to acquire a lock that causes contention on the same resource and this causes blocking. The blocking stops as soon as the first session releases the locks and there is no other session holding the locks.  Locks are used to make sure that multiple processes are not modifying the same data at the same time which can cause inconsistencies.

So, blocking is necessary for the relational database engine to work properly, but we can do some of these things to minimize blocking:

As per the above points, I would like to explain more about the lock timeout setting vs query re-attempt logic.

If you don't want to wait forever for a lock to become available, SQL Server offers the lock_timeout interval, which case be set as follows:

You specify the timeout interval in milliseconds, i.e. for a 10 second interval use the below code:

As per the process request, a lock resource that can’t be granted within 10 seconds will be aborted. This will generate the exception "the lock resource request time out period exceeded".

This doesn’t mean that every query session would terminate if the interval is exceeded, because it is a lock exceeded interval value.

Let me explain. I executed the below code in SSMS. 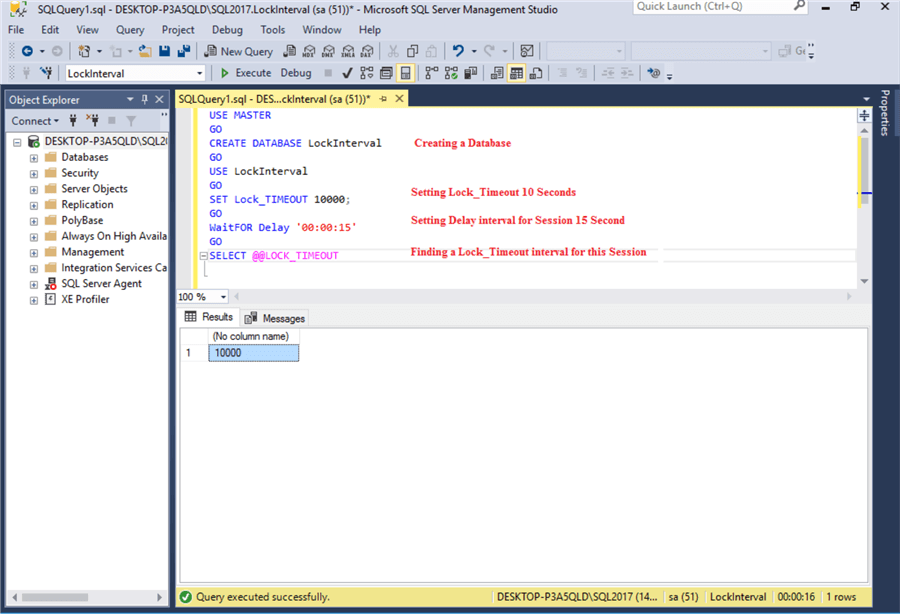 After creating a database, I set the Lock_Timeout interval to 10 seconds and a delay interval to 15 seconds. In the last statement, I want to check what the timeout setting was for this session. After execution, the overall batch took about 16 seconds which is expected based on the 15 second delay, but the overall process didn't abort even though the lock timeout of 10 seconds was exceeded.

As per a real use case, we can use the lock_timeout to check for blocking that exceeds a certain limit and instead of failing the process due to the lock_timeout or waiting indefinitely for the locks to become free, we can set a delay and re-attempt the command again.  This could also be helpful for deadlock situations.

The following creates a test database and a table with data.

Now I am going to write a DDL operation (doing an add column) using the lock_timeout setting, in addition I will use five query re-attempts in case the process is blocked for more than 10 seconds.

Below is execution of the script. 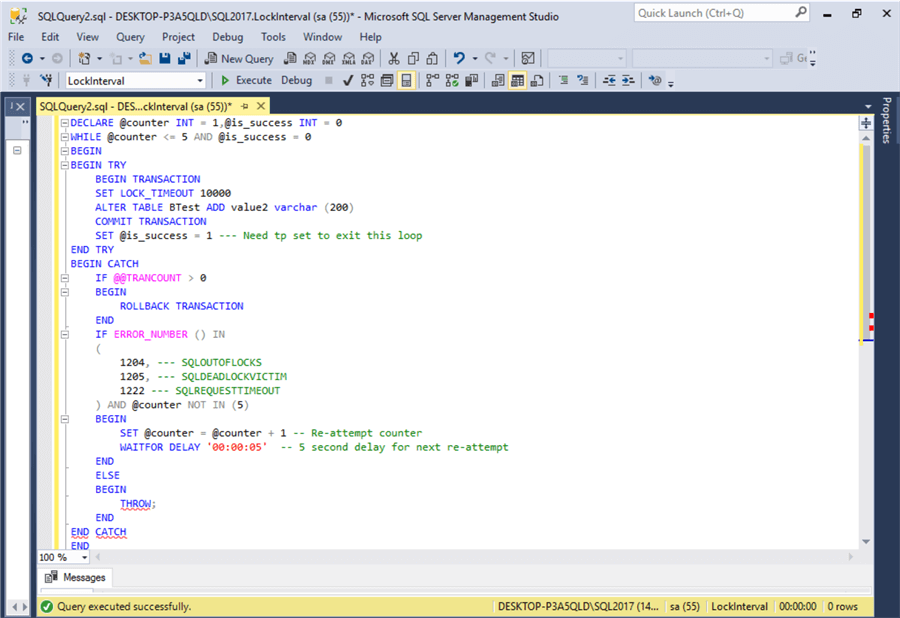 The above finished in less than 1 second, which means there was no locking contention with other processes.

In the script, I used a transaction with a try-catch block for evaluating the blocking issue. I used variable @counter with a value 5 which means when an error is raised related to the lock time out, request time out or deadlock the counter will increment by 1.  After waiting 5 seconds, then try again. The entire process will fail when the counter’s value is exceeded. If the entire process fails, you can just run the entire process again until it is successful.

Below are the error numbers and description.

I would like to demonstrate the process where the error is generated.

In the database we created I am going to execute an update query using with transaction as follows, but not commit the transaction so the locks stay open. 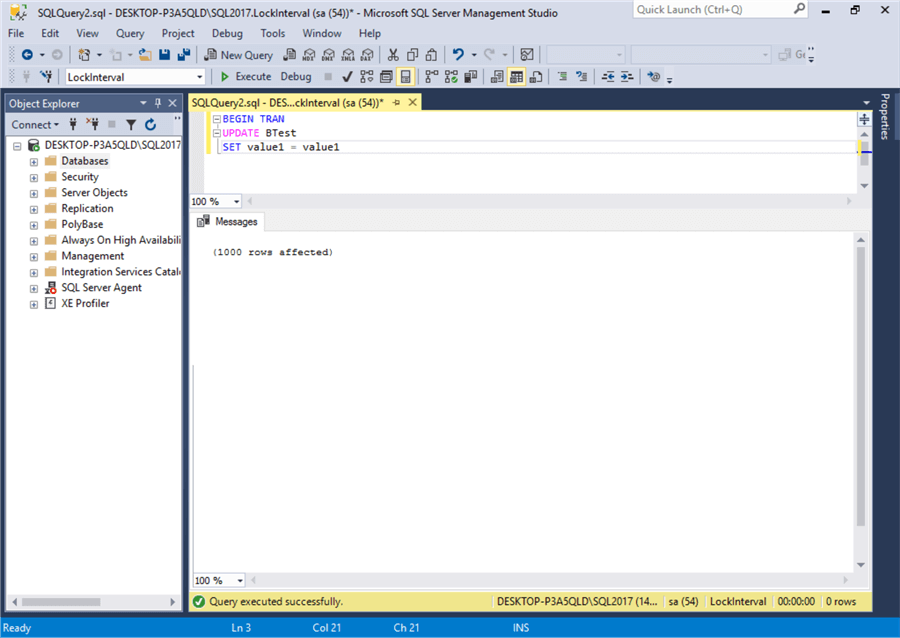 In another session, I am going to add value3 as a new column to the same table with using the code below. 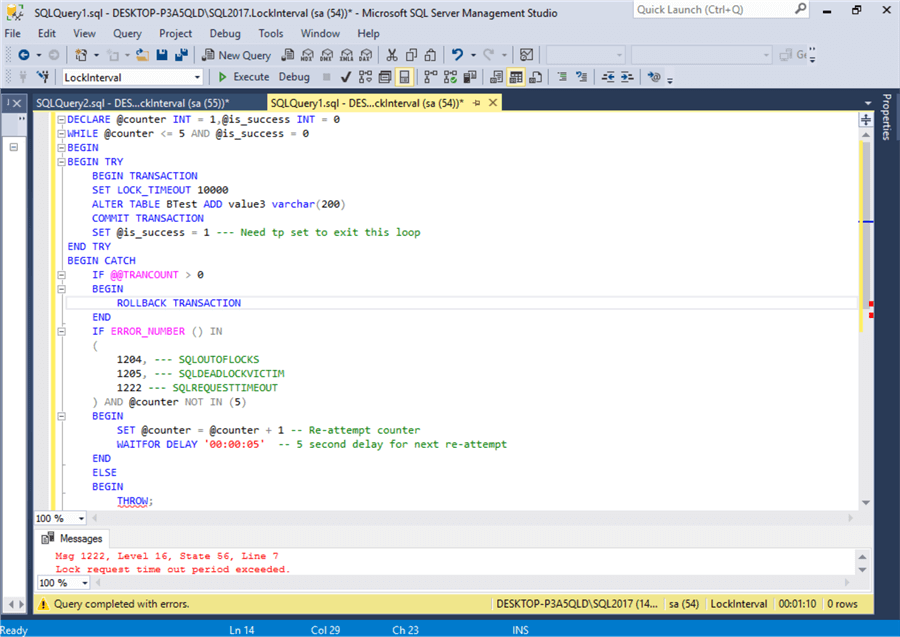