In this tip we look at different examples of getting random values using the SQL Server RAND function to give you a better idea of how this works and when and how to use it.

Basic Operation of the RAND function

The following example shows the syntax for running the function six successive times with the same seed value (1) for each invocation.

The output from the preceding script shows the returned values.  Each return value is the same because each select statement relies on the same seed value of 1.  The function’s output appears as a float value (0.713…). 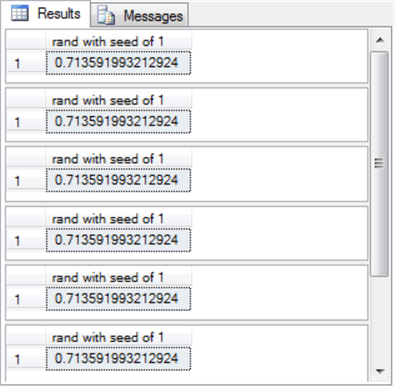 The following table shows the results sets from two consecutive runs of the preceding script.  Notice that each run returns the exact same sequence of values.  This output confirms that the list output by the script repeats the same sequence of pseudo-random values.  The feature keeping the results the same across consecutive runs is the seed value for the first invocation of the RAND function.  If you change the seed value for the initial invocation of the RAND function, then the pseudo-random sequence in the results set also changes.

The next script shows six consecutive invocations of the RAND function, but this script does not specify a seed value for the initial function invocation nor any of the other invocations.  When you do not specify a seed value, SQL Server automatically assigns a random value in the background.  Therefore, each invocation returns a list of six pseudo-random values, but the list does not repeat across successive runs of the script.

Here’s the output from two consecutive runs of the preceding script.  Notice the results sets are different across consecutive runs.  The list of pseudo-random numbers in each list are unique because there is no user-supplied seed value for the initial invocation of the RAND function.

By default, the RAND function returns values with a uniform distribution.  By a uniform distribution, it is meant the frequency is the same across discrete pseudo-random values as well as across continuous pseudo-random value ranges with the same width. Furthermore, SQL developers can transform the uniform float values from the RAND function to discrete values, such as the integer values of one through ten. This section demonstrates the code for accomplishing this kind of transformation for RAND function output.  In addition, this section examines the pseudo-random digit output from a script to confirm that the counts for the ten digits is approximately the same across successive script runs.

Here’s the script to create a fresh version of a table for storing randomly created digits, populating the table with one thousand digits, and then counting the frequency of occurrence of each digit value in the set.

The following table shows the results sets from three consecutive runs of the preceding script.

Pseudo-random digit values that are uniformly distributed offer many potential benefits to database applications, including taking a random sample of the rows in a very large table.  The next section illustrates one approach to implementing this kind of solution.

Selecting a random sample from a very large table

Two prior tips demonstrated how to create a data warehouse of historical stock prices and volumes with data from the first trading date in 2009 through October 7, 2019.  The Next Steps section in this tip contains links for learning more about the data warehouse.  A fact table in the data warehouse (yahoo_prices_valid_vols_only) contains over fourteen million rows.  Before demonstrating random sampling techniques for rows from a large table, it will be helpful to query the yahoo_prices_valid_vols_only table to gather a few metrics on its contents.  The following script generates these metrics.

Starting with #symbols_with_all_dates and yahoo_prices_valid_vols_only, the next script demonstrates how to draw two different random samples each having ten symbols from the distinct symbols in #symbols_with_all_dates.  There are 7,081,326 rows in the target population from which sampling is performed.  These rows are derived for price and volume data for each of 2614 symbols for 2709 trading dates.

The next screen shot is for an Excel spreadsheet showing a pair of results sets for each sample.

Several analyses follow to help identify if and how the two different samples confirm they are from the same population of price and volume data because they yield similar results. 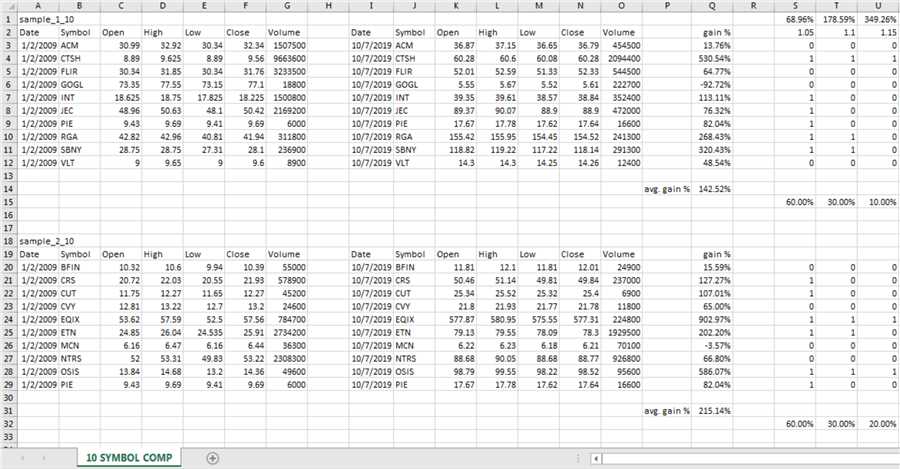 The preceding analyses in this section are just a selection of examples for assessing if and how two samples from the same underlying population yield comparable results.  As this section confirms, the assessment about if two samples are similar depends on how you compare them.  Therefore, you should tailor your comparisons based on the needs of those requiring the results.

The T-SQL scripts and worksheets for data displays and analyses are available in this tip’s download file.  After you confirm that you are getting valid results with the code from the download file, try variations to T-SQL code from this tip.

If you want to test the code for this tip’s last section, then you also need to run scripts from Collecting Time Series Data for Stock Market with SQL Server and Time Series Data Fact and Dimension Tables for SQL Server.  Scripts from these two prior tips will re-create the yahoo_prices_valid_vols_only table in your SQL Server instance.  You can draw different samples of symbols from those in the last section by specifying different seed values for the initial RAND function invocations.

Of course, the best way to derive value from this tip is by running the code in the download for this tip with your company’s data.  If you encounter issues, I look forward to answering any questions that you have about how the code should work and/or how to get the code to work for your personal needs.