The issue with NULL values is that not planning for them being included in your query results will lead to problems. How can we deal with detecting NULL values and replacing them with a non-NULL value?

COALESCE is one of the tools you have in SQL Server to work with NULL values. It may not be the first one you think of, but it can be a very good choice. In this tip I will provide examples of how you can use COALESCE to peacefully coexist with NULL values.

Before we dig in to the details on COALESCE, let's first discuss a few things about NULL in SQL Server and the approach taken in this tip.

There are a couple of options in SQL Server that you set at the database level to determine behavior related to NULL; e.g.:

ANSI_PADDING should be set to ON. When set to ON the behavior is as follows:

I will assume the above settings are ON for the demo code in this tip.

However, even if we specify columns in tables as NOT NULL, there will still be instances where we have to deal with NULL values when we write T-SQL code.

In the sections that follow, I will walk through examples where we have to consider NULL values in order to come up with the correct result and show how we can use COALESCE to transform NULL values into non-NULL values.

I will use the following sample schema in the demo code for each section that follows: 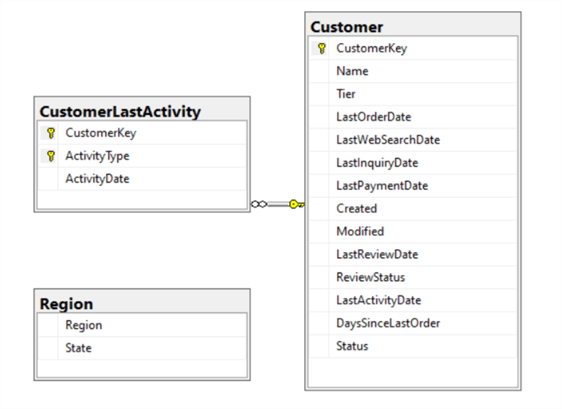 The overall idea of this schema is a really small slice of a data mart with customer data. I will use sample queries from the tables in this schema to demonstrate the various scenarios for using COALESCE.

Our starting point in this tip is to provide a precise definition of SQL COALESCE.

When you view COALESCE in SQL Docs, you will find it under Transact-SQL (T-SQL) Reference / Language elements / Expressions. Generally speaking, you use the COALESCE expression in the column list of a SELECT statement, although its usage is not limited to the SELECT statement. COALESCE itself takes as arguments a list of 1 to N expressions and returns the value of the first expression that is not NULL.

The following is from COALESCE in SQL Docs:

The simple example uses COALESCE to return an alternative value for a column that IS NULL. The following T-SQL query returns the [Tier] for a customer or NONE if the customer [Tier] IS NULL:

The following are the results:

Use Coalesce for String Concatenation

Simple string concatenation can produce unexpected results when one or more of the columns to be concatenated have a NULL value. In the example below, [FirstName] and [LastName] are defined as NOT NULL; [MiddleName] is defined as NULL (i.e. allows NULL).

The result from the above query is:

This is not what we want. To investigate, here are the results showing the individual columns:

The issue is caused by the [MiddleName] column with the NULL values and the assumption that the database setting for CONCAT_NULL_YIELDS_NULL is ON. We can use COALESCE to get the correct result in the query below:

The result from the above query is:

Based on the usage of COALESCE, you can accomplish the same thing with the CASE statement. In fact COALESCE on SQL Docs notes that the query optimizer actually rewrites COALESCE as a CASE statement. This has an important side-effect which I will discuss after we walk through the sample code below.

We have a customer table that tracks the last date for several events that are of interest to the business users. Various marketing campaigns will select customers based on how long it's been since a particular event occurred.

Here are the customers and their last date columns for the various events:

The following T-SQL query uses COALESCE to determine the Last Activity Date for each customer:

The results from the query are:

Remember that COALESCE returns the first non-NULL value in the argument list. All of the last event date columns allow NULL because when a customer is created and for a period of time after creation, these events have not actually happened. The [Created] column does not allow NULL so it is the last argument. If none of the other events have happened, the [LastActivityDate] returned will be [Created]. By using COALESCE I have specified the order of the columns to check for the first non-NULL value.

The results are the same as using COALESCE:

I prefer COALESCE over CASE because it's simpler and requires less code. However, CASE allows for implementing more logic for the conditions. Either way you get the same result.

When you first figure out that you need to deal with NULL values, you will likely find the ISNULL function. The definition is simple: Replaces NULL with the specified replacement value.

The following are the query results (same as using COALESCE earlier):

In the earlier tip Deciding between COALESCE and ISNULL in SQL Server, Aaron Bertrand provides a very detailed analysis that will help you to decide between ISNULL and COALESCE. I will highlight what I consider to be the most important points from Aaron's tip which will help you to decide which one to use based on particular situations.

You might think that since the @datetime variable is clearly NULL, the SELECT would return the integer value of zero. However, because COALESCE uses data type precedence and DATETIME has a higher precedence than INTEGER, the return value is 1900-01-01 00:00:00.000.

Here are some additional points that Aaron made:

A computed column is a column in a table where the column value is determined as the result of an expression. The expression can include other columns in the table as well as logic. By default, a computed column is not stored in the table; the value is determined when you use it; e.g. include it in a SELECT statement. You can override the default behavior and store the value in the table by adding PERSISTED to the definition. If you wanted to index the column, you would add PERSISTED.

In a data warehousing scenario, the business users typically spend a lot of time analyzing customers.  As an example, I will implement a computed column named Status with the following logic to determine the value:

The first thing I will do is add a column for the DaysSinceLastOrder in order to simplify the logic. The following T-SQL can be used to conditionally add a column to an existing table (i.e. add the column if it does not exist, otherwise do nothing):

At some point during our nightly ETL process we recalculate the days since the last order. Here is a simple UPDATE statement to do this:

Now the Customer table has the following values for DaysSinceLastOrder:

Now I will add a computed column to the Customer table to implement the Status:

Adding a DaysSinceLastOrder column and a Status computed column are examples of the extra steps I like to take to make life easy for the business users and ultimately myself.  I try to provide the results of calculations and also eliminate the need for the business users to have to deal with NULL values. I can't eliminate every case where NULL will be returned but I can try.

Use Coalesce to Pivot Data

Sometimes you want to take multiple rows of data and pivot them into a delimited list contained in a single column. You can use COALESCE to make this easy. This was demonstrated in the tip The Many Uses of COALESCE. I will use an example of states assigned to regions. The following T-SQL can be used to setup some sample data:

Use the following T-SQL to select the states for a region and put them in a single column delimited by semi-colons:

The following are the results from the query:

Note the query concatenates the state from each row returned. It uses COALESCE to avoid concatenating the state to the @REGION_LIST variable when it is NULL which happens with the first row of the results.

Use Coalesce in an UPDATE

The query returns the following results:

As you can see all of the last activity dates are NULL.

In our nightly ETL process we want to update these dates based on the latest transactions. The ETL process drops and recreates the CustomerLastActivity table with a single row for the Customer, activity type and the latest activity date as shown below:

Here is the T-SQL statement that we can use to pivot the data and perform the UPDATE of the Customer table:

The following are the main points for the above T-SQL statement:

After executing the above T-SQL the Customer table rows have the following values for the last activity dates:

Use Coalesce with Incremental Update

Incremental update is a classic pattern where you want to update data in a target table with the data from a source table that has changed. SQL Server provides some built-in capabilities to perform this task such as Change Tracking, Change Data Capture and even Replication. There are scenarios where you are not able to leverage these built-in solutions and you have to roll your own. It may be that the source database is a database snapshot or the source database is used by a third-party application and the vendor will not provide any support if you're using one of the built-in change mechanisms.

The issue is one that doesn't happen often, but when it does and you're not looking for it, it's a huge problem. The pseudo-code for the incremental update starts with something like this:

This is extremely simplified but it illustrates the point. You retrieve the appropriate value for the @LAST_MODIFIED variable from the <target_table> and you INSERT the rows modified in the source into the target since the last time you ran this.

The simple solution is you have to check if @LAST_MODIFIED IS NULL and do something. Let's take a really simple case. You don't want to retrieve any data from <source_tablename> that is more than 5 years old. Add the following T-SQL using COALESCE after you get the value of @LAST_MODIFIED: