In SQL Server, there is a datatype called UniqueIdentifier that can be used to define GUIDs. To learn more about GUIDs refer to this excellent link by Siddharth Mehta and try out the sample queries in that tip.

Defining a primary key on a table will automatically create a unique clustered index unless it is mentioned explicitly not to create one. You could use the same scripts from this tip.

Here, you can see you have defined the primary key on the ID column. This will create a corresponding clustered index as shown below on the left and in the script on the right that can be generated from SSMS.

However, you could have avoided this scenario by specifying the non-clustered option as shown below.

For this demo, we will create a non-unique clustered index on the productname column. This is for testing purposes only. As the non-clustered option is explicitly mentioned for the primary key, the clustered index does not get defined on the uniqueidentifier column.

Uses of GUIDs in SQL Server

One of the major uses of GUIDs is in merge or replication-based applications. Normal integer based primary key columns may face issues while trying to merge data together and dealing with the conflict issues would get tiresome especially if dealing with huge databases in busy applications. GUID usage gained popularity over time due to these benefits. You can refer to this link where pros and cons of using integer or GUID based primary keys is neatly explained by Armando Prato.

All of the factors mentioned come in handy especially at the design phase of the application where the table and the indexes can be defined based on the correct requirements. But sometimes, things like a clustered index on an uniqueidentifier column defined as a primary key can get overlooked causing performance issues at later stages.

What is the issue if clustered index is on a GUID primary key column?

The purpose of the primary key is to uniquely identify every row in the table. So, there is no problem in having the GUID as a primary key. However, as we saw earlier, creating just the primary key by default also creates a unique clustered index unless otherwise mentioned.

The clustered index as we know, helps in defining the physical order of the rows of the table. As GUIDs are randomly generated, defining the clustered index on the GUID column will lead to page splits in the page structure where data is entered in the middle of the page based on the value of the uniqueidentifier. This type of page split will have an impact on INSERTs and UPDATEs. It will lead to issues with SELECT statements as well due to heavy fragmentation. You can refer to this link by Ben Snaidero where he neatly compares page splits while using int, bigint or GUID data types.

To learn more about fragmentation, refer to this excellent tip by Brady Upton where he gives a good overview of SQL Server index fragmentation. You can use the same scripts from this tip to get fragmentation percentage.

On running this script, you will get this output with details on index fragmentation percentage.

As you can see this is an empty database with a very low page count. Let's insert rows to the Product_A table we created earlier to test fragmentation as the clustered index is defined on the GUID primary key column on this table. Use this sample script that will perform the test inserts. You may modify the GO value if you want, but the idea is to test with a high number of inserts.

You could imagine the impact on huge databases that have high usage.

In order to test this scenario, we could use the other table we created earlier - Product_B. Use the script below to perform test inserts into this table.

As seen earlier, we had used the newid() function in the Product_A table. This generates random unique numbers every time. There are specific use cases for using either of these functions and you may refer to this tip mentioned earlier to learn more.

The newsequentialID function helps to generate a GUID greater than a previously generated one. This would help especially when used as clustered index as fragmentation would get reduced compared to having random values for GUIDs. You can use the same tables you had used earlier or you could create a new table using the below script. You can see we are using the newsequentialID() function.

Once done, perform the inserts as shown earlier.

Below is a sample screenshot of the sequential GUID's. 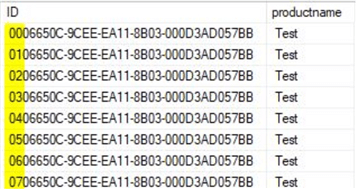 For testing this scenario, you could alter the existing Product_B table or use the below scripts. You can notice the use of the newsequentialID function as default for primary key.

Once done, perform the inserts using below script. 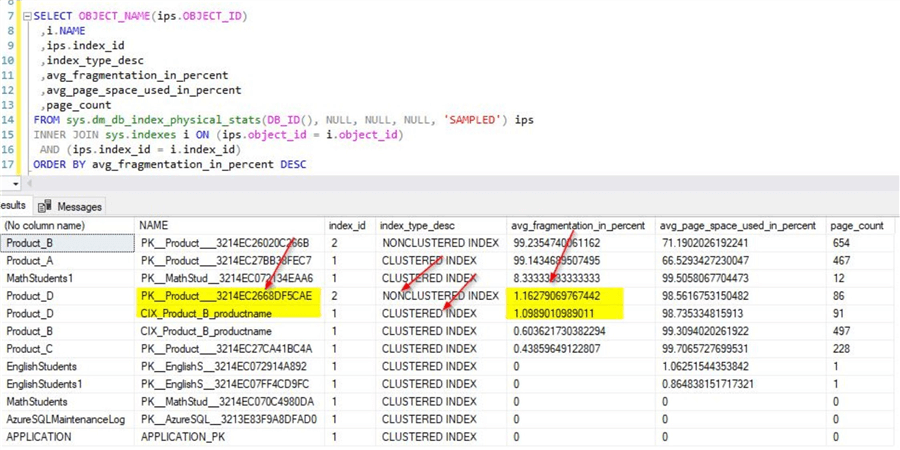 As you can see there are some workarounds we can use if you are facing considerable performance issues based on the above scenarios. There is no standard approach to deal with these issues. It is best to test all options based on your requirements before applying any of the suggestions mentioned above.

In the above query, system_type_id = 36 is for the uniqueidentifier datatype.

The sample output for this query is below.

Using this query, you can quickly identify indexes in your database that may be impacted due to the presence of clustered indexes on the GUID columns.

SQL Server Filtered Indexes What They Are, How to Use and Performance Advantages