Our organization has many SQL Server Agent Jobs that run over the course of a day. Many of these jobs are critical to the business so we need to monitor the status of the jobs closely. There are many options for monitoring such as the Job Activity Monitor or View History in SQL Server Management Studio (SSMS), executing custom T-SQL queries that use tables and views in the msdb database, PowerShell, third-party tools, etc.

I would like to simplify our monitoring by creating a Power BI dashboard that will give us the details we need and provide an on-demand refresh capability. We are looking for a few pieces of information about each job that is currently running such as how long has the job been running, the average time the job runs, etc. Every so often I want to click on the dashboard and have the data refresh with the latest available status on the jobs currently running.

In addition to the basic monitoring I have described, we need to have an estimated completion time for each job that is currently running. For any given job, its completion provides the availability of certain data that is critical to the business. As a for instance, there are many dashboards that get their data refreshed every morning. There is an expectation that the dashboards will be available no later than 8:00 AM. We need to know if any of the jobs that the dashboards depend on will finish later than 8:00 AM and if so, we need to post a company-wide alert that the dashboards are delayed and when they will be available.

How can we accomplish this with Power BI?

In this tip I will demonstrate a simple approach to gathering data from the SQL Server Agent tables, populating a data mart, and rendering the data with a Power BI dashboard. At a high level, I will walk through the following steps:

The following is an example of the Power BI dashboard that I created to monitor active SQL Server Agent jobs:

The main points for the dashboard are:

The jobs and data mart tables will be discussed in the sections that follow.

SQL Server Agent provides many tables in the msdb database that can be queried to retrieve current and historical data about SQL Server Agent jobs. You can get the full details on the available tables here. For our purposes, we will be using the following tables:

The data mart has a group of tables that contain historical data extracted from the SQL Server Agent tables. The diagram below shows the tables and their relationships using the model view in Power BI: 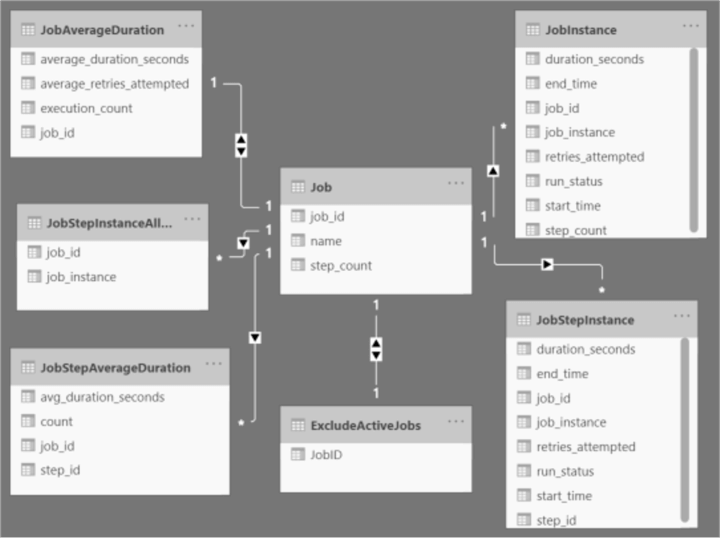 The main points for the model are:

Note that although the above diagram looks like the standard star schema, it is a bit different. Most of the tables are fact tables. The Job and ExcludeActiveJobs tables are the only dimension tables. 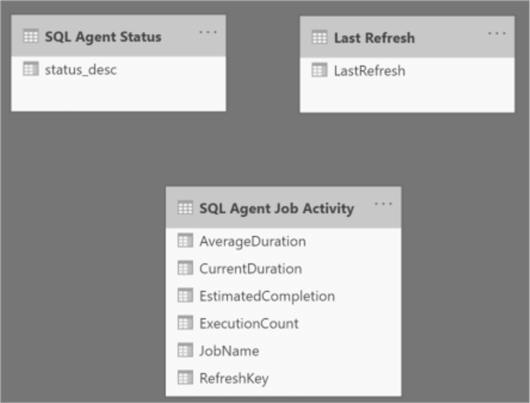 Each of the above tables and views populate a corresponding visual in the Power BI dashboard shown earlier.

The goal of the CALCULATE JOB HISTORY SQL Agent job is to calculate the average duration of SQL Agent jobs and job steps. The calculations are primarily based on the data available in the sysjobhistory table. When the data is retrieved to refresh the Power BI dashboard, the average durations are already calculated and simply retrieved from a table.

The CALCULATE JOB HISTORY SQL Agent job is designed to be run on demand, although scheduling it to run during off hours would be advisable. The tables shown in the diagram in the Data Mart History Tables section above are populated by the job. The following are the steps in the job:

The following are the main points from the above T-SQL:

The result of the above T-SQL is to produce a sequential number for each job that completed successfully. The ROW_NUMBER function numbers the jobs based on job_id ordered by the job_id and start_time. The purpose is to group the job steps in the job. We will see this below.

The main points for the above code are:

It would be a bit tricky to accurately compute average durations under the following scenarios:

Given the above issues, I decided to only include successful jobs where all job steps completed successfully in the calculation of average duration.

The following is an excerpt from the T-SQL code in the LoadJobStepInstanceAllStepsCompleted stored procedure:

The main points from the above code are:

The following excerpt of T-SQL code from the CalculateJobStepAverageDuration stored procedure shows the rows selected and the calculation of the average duration:

The JobAverageDuration table gets populated with the average duration of each job. The jobs that completed all steps successfully are included in the calculation of the average.

The following excerpt of T-SQL code from the CalculateJobAverageDuration stored procedure shows the rows selected and the calculation of the average duration:

The SQL AGENT DATA MART ETL job only has one step; it executes the stored procedure GetActiveJobs. The GetActiveJobs stored procedure extracts data for the SQL Agent jobs that are currently running from the sysjobactivity table and also retrieves the average job and job step durations as explained above. The data is inserted into the ActiveJobs table. The view vActiveJobs queries the ActiveJobs table and is used by the Power BI dashboard to populate the list of the SQL Agent jobs currently running.

The SQL AGENT DATA MART ETL job can be scheduled to run as often as you like. You can set the schedule based on how long the job runs and how often you would like to see refreshed data in the Power BI dashboard. I have the job running every minute for my testing.

The following excerpt of T-SQL code from the GetActiveJobs stored procedure retrieves the data on the currently running SQL Agent jobs from the sysjobactivity table:

I think the only way to get the job_id of a SQL Agent job is to query the sysjobs table:

Finally, the last step in the GetActiveJobs stored procedure is to insert the @REFRESH_KEY and @REFRESH_DATE into the ActiveJobsRefresh table as shown below:

When the Power BI dashboard is refreshed, the view vActiveJobs is used. The following is the code for the view:

As shown above, the MAX(RefreshKey) is retrieved from the ActiveJobsRefresh table and used to join with the ActiveJobs table to only return the latest data collected on SQL Agent jobs running.

The Power BI dashboard for this tip is really a trivial one. However, I will walk through some typical considerations.

When you are retrieving data from a SQL Server database with Power BI, you can choose from the Import or DirectQuery Data Connectivity modes. Import makes a copy of your data and stores it in the Power BI pbix file. DirectQuery queries the data directly from the SQL Server database(s). Given that the SQL Agent data is in the msdb database on the SQL Server instance where the SQL Agent service is running, I chose DirectQuery. Refreshing the dashboard data executes the queries specified in the dashboard and returns the data.

Whenever you retrieve data for analysis and reporting, it is often a good idea to transform the data into a schema that is conducive to reporting. This is typically the star schema. I did this and created the data mart although it is not the typical star schema as mentioned above. However, Power BI has some really impressive capabilities for transforming data as shown in the tip Introduction to Power BI Desktop and the M Language. With data coming from SQL Server, I choose to do the transformations in SQL Server using stored procedures that write the data to tables in the data mart. At this point I am much more comfortable with this approach. In addition, I have created a dart mart which could easily be used outside of Power BI.

As far as deployment of the Power BI dashboard, I only used it running in Power BI Desktop which is quite an impressive application. It supports both development and rendering of the dashboard. Literally you just click Refresh to update the data rendered on the dashboard.