As a part of a series of articles, called PowerShell tools for the DBA, I’m presenting a PowerShell tool that can help any SQL Server DBA to perform best practices checks against their instances.

General Note: If you run the script from PowerShell ISE, then you will see pop-ups asking you to choose among several options. However, if you run it directly from a PowerShell console, instead of pop-ups you will see the options presented to you in the command line interface (you will see the difference in the screenshots below).

You can run the script a few different ways:

The script will ask for:

If you choose a type of login that requires you to input credentials, the script will notify you if such credentials fail to connect to the specified instance.

If you specify an instance that either doesn’t exist or there are issues to connect to it, the script will notify you so.

With the correct information specified, the script will start to check each best practice one by one and will notify you if each passed or failed. The script shows you all at once, I will present them individually just for demonstration purposes.

Ideally, a value between 75% - 80% of the memory in the server is a good target. However, there will be some cases where this can be treated differently (especially if the server is not a dedicated database server). My test instance is using 2GB of the 4GB on the server.

With this setting on, the OS will not touch any pages in memory that the SQL Server process already has allocated. I don’t have it enabled for my test instance.

With this setting on, every time a new database file is either created or more space is allocated to it, this setting allows it to do it quicker because it is not zeroed out in the process (this doesn’t apply for transaction log files). In my instance, I have it enabled because I’m using SQL Server 2017 and the installation wizard allows you to enable it during the installation process (good Microsoft change I guess).

Almost as a rule of thumb, user database files should not be placed on the C:\ drive. In my instance, I have everything on the C:\ drive because that’s the only drive I have in my test VM.

It is a good practice to run the Database Engine service using a domain service account with less privileges. Sometimes it is a bit tough to achieve due to certain restrictions from 3rd party vendors. In my case I have the default account that SQL Server assigns to a new instance.

It is a good practice to run the SQL Agent service using a domain service account with less privileges. Sometimes it is a bit tough to achieve due to certain restrictions from 3rd party vendors. However, this service is not used for the SQL Server Express Edition. In my case I have the default account that SQL Server assigns to a new instance.

Generally speaking, the more logins with sysadmin privilege there are in an instance, the higher the risk of having it compromised by somebody that is able to get their hands on any of the accounts. There are times where such accounts are required, but that will depend on your own particular case. For this check, I have left the sa account and the System accounts as the ones "acceptable" to have sysadmin privilege. 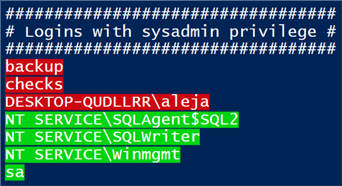 Generally speaking, it is better to have database files split across a set of isolated storage subsystems, to enhance the performance of SQL Server. A drive for database data files, a drive for transaction log files, a drive just for TempDB, and a drive for backups.  In my test instance, I have everything in the exact same drive.

Database files with growth in %

If your database files are set to grow in a percentage, rather than in MB, then you face the risk of having at least one that eventually grows so large that the next increment will not be possible because it will completely fill the disk where it’s hosted (impacting anything else stored in there). These are the databases on my system.

Checklist to Re Architect a SQL Server Database